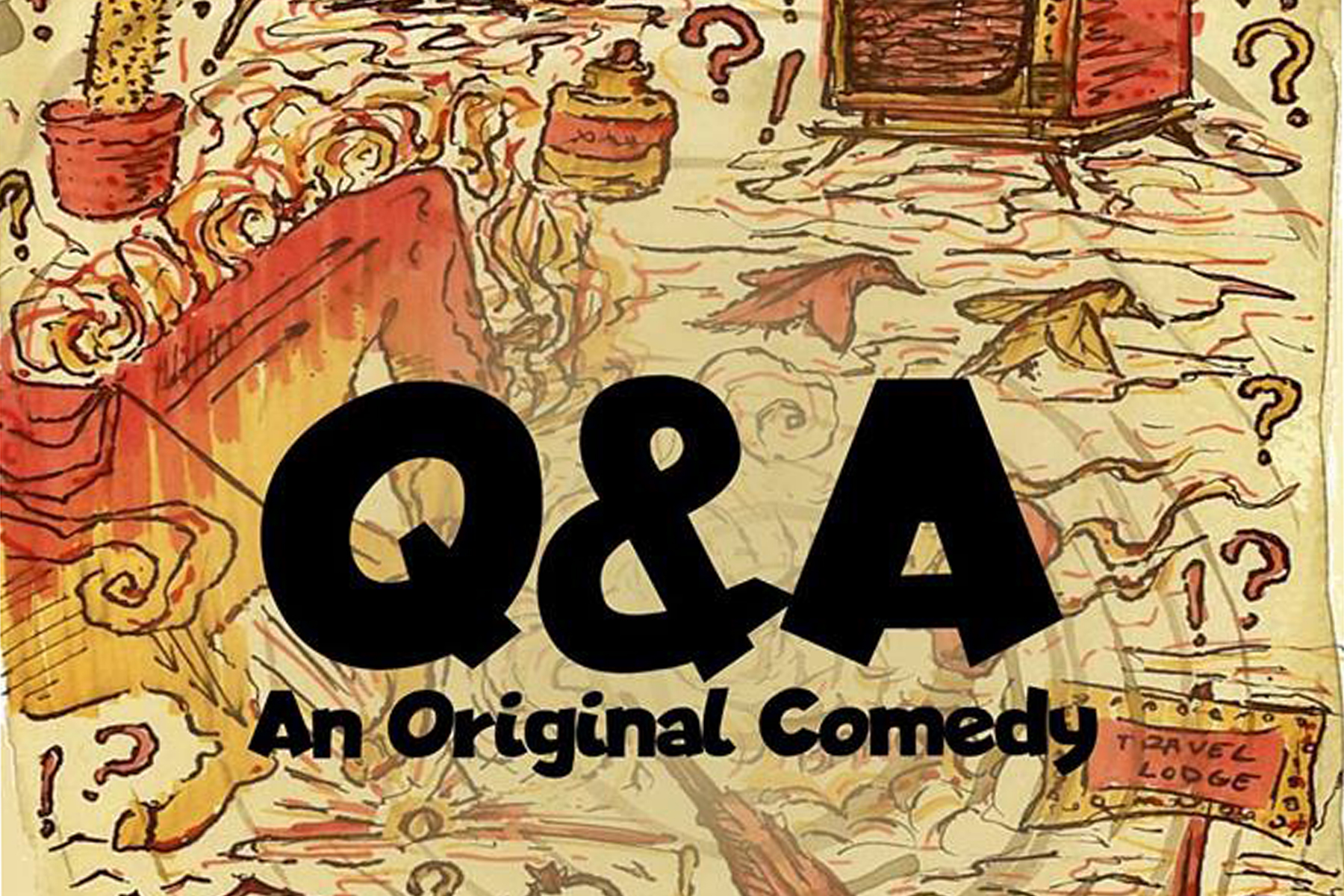 Question and answer sessions with the cast of a play following its performance have become a common event in theatre these days. As someone who takes an avid interest in the behind the scenes aspect of plays I’ve attended quite a few, although I can safely say none have been quite like the fictitious version of such an event featured in Q&A, an original comedy from student writer, director, producer and performer Isaac Troughton.

In Q&A the cast of an experimental adaptation of Catcher in the Rye are questioned by audience members and chaos ensues. This immersive comedy features not only the classic play within a play dynamic, but also cleverly places an audience within an audience. Cast playing characters who were the audience to the Catcher in the Rye adaptation are dotted around the BT’s seating to ask the cast their questions.

This staging choice really helps draw the audience for Q&A directly into the events which unfold. Having elected to sit at the back for the performance, I found myself wondering how different my experience of the show would have been had I sat somewhere else. At times my view of the actors on stage was obstructed by a cast member in the audience standing to ask a question, but this problem proved less of an annoyance and more of an enjoyably immersive aspect to the show. I imagine those sat at the front who found themselves frequently craning their necks to view the cast seated behind them would share the same sentiment. For those interested in the best view of the show with as little obstructions as possible, I’d suggest sitting in one of the middle rows of seating.

Be ready for the comedy to begin as soon as you enter to take your seats, as actors already appear on stage performing the end of their adaptation of Catcher in the Rye. In a wonderful mockery of divisive modern theatre techniques, actors either drag themselves around on all fours having explained they are cars, boldly declare comments such as ‘we live in a society’, or infrequently quack like ducks. Q&A only officially begins once this hilarious performance is over, and the actors leave the stage to prepare for the titular event.

El Wood as stage manager Sam is great at portraying the awkward organisational minutes which pass in-between the end of a show and the return of its actors for questioning. Once the actors do arrive it’s time for the cast in the audience to begin asking their questions to the actors assembled. All characters in the play appear as quite simplified stereotypes. On stage we have posh thespian Jasper, new age actor Niamh, and scandal troubled actor Sebastian. In the crowd we have a bored youth, a worryingly obsessive old woman, and a belligerent critic.

It could be argued that as part of a comedy these rather one-dimensional personas should be forgiven as being contributory to the humour, but they are better saved by the cast’s performances which never become so over the top that they break any attempt at realism. Particular praise should go to Stepan Mysko von Schultze for his reactions as Jasper, which remained natural whilst still accurately portraying the flamboyancy of his role. All characters are enjoyable and well-acted despite being a little predictable.

One scene which demonstrates the balance the actors keep between realism and overacting is that in which Jasper and Sebastian (Tom Saer) try to school the rather disinterested youth on how best to deliver a line from their play. I found this scene’s humour reminiscent of the memorable ‘to be or not to be’ sketch from the RSC’s celebration of Shakespeare which mocks how actors disagree on emphasis in lines. Isaac Troughton’s apathetic youth creates an additionally funny dynamic, making it a stand-out moment from the play.

A sudden twist near the end of the show is delightfully surprising and hilarious. Fifi Zanabi’s comically mad handling of this scene should be applauded. Sadly, the remainder of the action which follows this twist pushes the play rather too far into the absurd from its realistic if stereotype heavy setting. The play comes to an end very suddenly following a great one liner. Despite its quality, when the house lights came up, I found myself disappointed that Q&A had come to an end without a clear resolution. The climax of this play appears to have been rushed and could do with some revision to help it work more coherently with the rest of the show, allowing it to leave a satisfied audience, as well as an amused one. While Q&A was an enjoyable, well-staged and excellently acted comedy, more could be done to make it an astounding success.