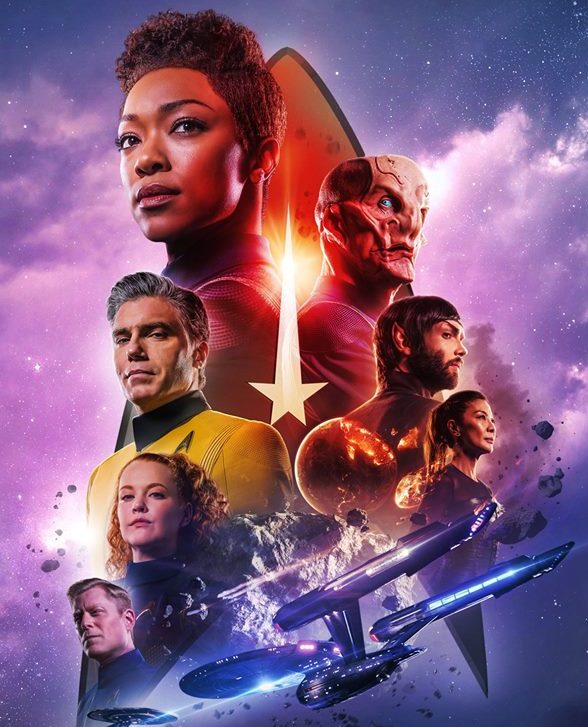 Big budgets aren’t unusual with Netflix; millions of dollars can be invested in a single episode. Reports from Variety suggested that each episode in Star Trek Discovery’s first season cost over $8 million. If the visual spectacle of the show’s sophomore season is anything to go by, the budget will have received a significant boost from its predecessor. Every episode is drenched in visual splendour, no matter whether it’s a standard scene with the crew or a full-scale armada in space. Although Bryan Fuller left due to conflicts with CBS, his sumptuous visual style from Hannibal and American Gods continues to pervade the sleek sci-fi fantasia.

Following the weak parallel universe thread in the first season’s later episodes, the appearance of a mysterious red angel compels Michael to seek her estranged brother Spock. With Discovery being my first introduction to the Star Trek TV universe, any references to canon are lost, but the lack of knowledge gets rid of the burden of didactic comparisons to previous entries.

Even if I had an encyclopaedic knowledge of the Trek back catalogue, Discovery stands on its own merit through its diverse cast and determination to craft intriguing narrative paths. After spending time introducing all the main characters in the first season, new showrunners Gretchen J. Berg and Aaron Harberts provide us with a few individual character episodes that enrich the wider narrative. ‘Project Daedalus’ stands out with its poignant study of human cyborg, Airiam.

One of the season’s acting highlights is Shazad Latif as Ash Tyler/Voq. With my only previous knowledge of Latif as hipster Clem Fandango in the comedy Toast of London, it’s weird seeing the actor in a serious role. Yet he conveys the pathos of a character comprised of two personalities brilliantly. His love for Michael Burnham (Sonequa Martin-Green) is still strong, yet his choice to grow out his facial hair like the other Klingons in peacetime is a touching tribute to his former lover L’Rell (Mary Chieffo). Michelle Yeoh continues her excellent role as Georgiou. It doesn’t matter what role Yeoh plays, whether it’s a Wudang swordsman in Crouching Tiger Hidden Dragon (2000), an intimidating matriarch in Crazy Rich Asians (2018) or a Starfleet Officer and her mirror universe counterpart. If Michelle Yeoh’s on the cast list, quality is guaranteed.

In fact, the second season, like the first, is littered with brilliant female characters. And not in the sense of the obligatory ‘strong female character’ label that has been tagged on to recent films like Captain Marvel. Just great narratives that happen to be written for a female actress. Martin-Green remains inspirational as Discovery’s seminal hero, and is given poignant heft as she comes into contact with her long-lost mother (Sonja John). Admiral Cornwell provides sarcastic wit to off-balance characters during moments of despair, and Yadira Guevara-Prip also excels as engineer and Xahean Queen Po.

The introduction of the season’s primary antagonist, Control (a threat assessment AI originally regulated by Section 31) also adds an intriguing element of body-horror that hasn’t been explored before. These moments aren’t exactly for the faint-hearted, but they’re a bold choice of direction for the primarily sci-fi-centric show. We also see the return of a certain pointy-eared Star Trek regular, whose deadpan humour provides comic relief as he attempts to negotiate the fiery temperament of Michael as he comes to reconcile with his long-estranged sister. His final facial hair of the season represents a more traditional Star Trek look, although he suited the beard. But I digress.

Season Two of Discovery builds on its already impressive predecessor with engaging character development and a climactic battle scene to rival any set-piece in the Marvel Cinematic Universe. Not convinced? No matter. Resistance is futile.

Birth of the brom-com in That Awkward Moment