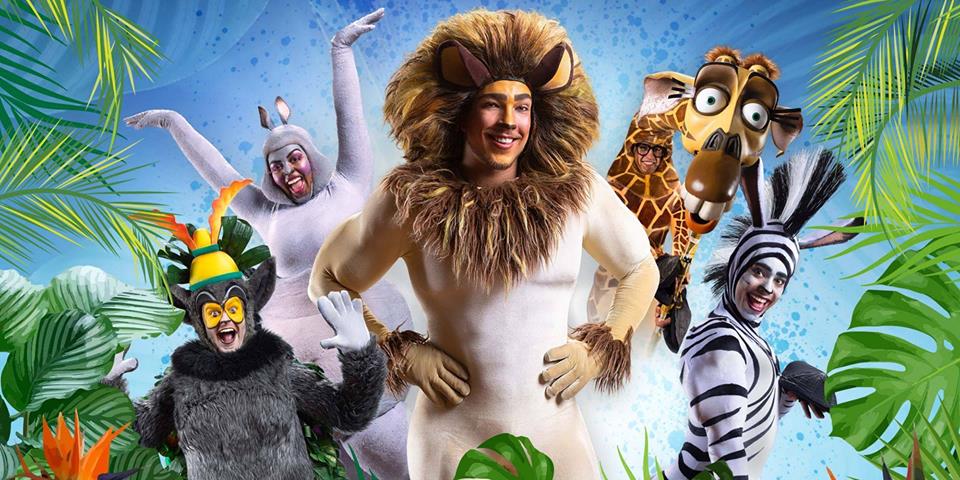 A half-empty theatre rarely bodes well. The curtain rose as my heart sank, and this underwhelming, under-rehearsed, and unambitious production began with over a minute of supposedly tension-building music and flashing lights that did little more than to make me overly conscious of the hundreds of empty seats in the New Theatre.
Just because a production is aimed at children is not an excuse for standards to slip. Ultimately, Madagascar the Musical is very disappointing: poorly written, with no memorable songs to sing on the way home, no memorable take-away message, and no character development to speak of. Cutting a relatively fast-paced 116-minute film down to a slow and repetitive 100 minutes on stage has left these cartoon characters even more two-dimensional than they started.

The advertising for this production lauds X Factor winner Matt Terry (Alex the Lion) as the star of the show. In reality, what Terry lacks in acting ability is barely redeemed by his singing. Unnecessarily ostentatious vocal flourishes throughout were perhaps designed to distract the audience from quite how bored he looked throughout the entire performance. The fact that he has no history on stage and has not trained as a dancer or actor was all too evident throughout.

This production is chronically lacking in almost every department

The rest of the cast were at least enthusiastic, but key moments were frequently lost or fell flat; at one point they ended up so out -of-kilter with the music that they started laughing, and when King Julian (Jo Parsons) dabbed, the awkwardness of the audience’s laughter was palpable. Throughout, Marty (Antoine Murray-Straughan) and Gloria (Timmika Ramsay) did a thoroughly competent job of covering for ineptitude among their colleagues on stage; both are energetic and fun to watch.

Fabian Aloise has an impressive choreography CV, including Matilda The Musical and the Madness musical Our House. The fact that so much of the choreography in Madagascar The Musical was so basic and unoriginal, therefore, seems to suggest that he has had to simplify things to cater for the actors – whether they lack ability, agility, or just rehearsal time, it is unfortunate that so much of the production was  flat and uninspiring, with little to no use of different levels, lifts, or indeed anything other than spins and jumps.

Costumes were little better. The concepts seemed well-planned at least, with Laura Rushton and Robert Allsopp’s costumes bulking out the actor’s figures to roughly the proportions of the animals they are supposed to be playing. The execution of these ideas in fabric and foam, however, leaves much to be desired. Alex the Lion’s tail hangs loose and his mane seems matted; Gloria’s belly and chest don’t match; Marty’s ears are mismatched; Melman’s neck is a different colour and texture to the rest of his body.

The stars of the show – as with the film – are undoubtedly the penguins. Portrayed on stage by four talented puppeteers, their antics are the only consistently good part of the show. Max Humphries’ puppets are well-articulated and true to the characters in the film, and Emma Brunton has clearly done a sterling job as Puppet Director. Particular mention must go to Shane McDaid, who brings to life Skipper and Maurice; his command of two such very different puppets (one knee height, one up to his waist) and impressive voice acting was the saving grace of this production.

Ultimately, however, this is a children’s show, and all the children in the audience do seem to be enjoying themselves. With face-painting in the Piano Bar and opportunities to stand up and dance in the second half, it was reassuring to see them enjoying the play even if I did not. Many queued up to buy t-shirts and posters in the interval. This production is chronically lacking in almost every department, but if you know any small children it seems that they won’t mind the awkward dabs and the poor directorial choices in the face of Alex the Lion and King Julian.

Julia Delpy decides two-star in her own film