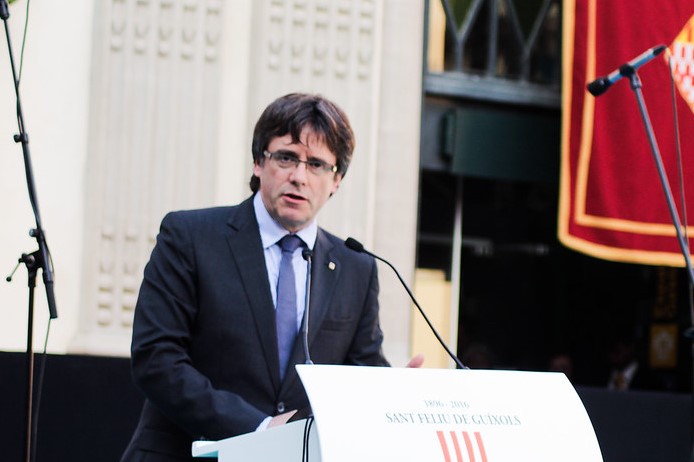 A letter signed by over 100 Spanish professors has been sent to the Union’s Standing Committee to protest what the signatories perceive as the “one-sidedness of its coverage of Catalan politics.”

Foro de Profesores, an “informal association of 240 university professors and other professionals” organised the letter, in which they express their “deeply regret that the Oxford Union seems to invite only nationalist Catalan leaders: Mr Artur Mas in 2017 and now Mr Puigdemont” as well as their disagreement with Carles Puigdemont being presented as the “Head of the Catalonian Resistance.” According to the letter, they find his views to be deeply divisive within Catalonia as well as causing damage to “the Catalan social fabric and economy.”

Puigdemont, who is due to speak at the Union on 28th May, is a Catalan nationalist and separatist politician. He served as President of the Catalan government from 2016 until he was removed from office in 2017 by the national Spanish government following Catalan’s unilateral declaration of independence. Puigdemont fled the country and is presently living in Belgium.

The signatories of the letter describe Puigdemont as a “fugitive from justice” and hold that the charges against him are “equivalent to embezzlement of public funds, obstruction of justice and employment of violence in the declaration of the independence of a Spanish region against the Spanish Constitution.”

The letter notes that in the 2019 Spanish general election, Puigdemont’s party, the Catalan European Democratic Party, received 12.05% of the vote in Catelonia, compared to the other pro-succession party, the Republican Left of Catalonia (ERC), which received twice as much, at 24.59%.

Drawing from these figures, the letter argues that “[i]t is therefore inaccurate and tendentious to present [Puigdemont] as representing a ‘Catalonian resistance’; if there is such a thing, it is not a resistance against Spain but against one half of Catalonia.”

“We decided to do this in the interests of clarity, as the letter pointed out that it could be potentially misleading, especially for those that are less well informed about Spanish politics.

“I would like to point out that a more full description was included in all our advertising material which did clarify the roles that Mr Puigdemont has held, as well as the fact that he is currently living in exile (the letter seemed to suggest that we had tried to hide this which is not the case).

“However, we do not plan to make any changes to the format of Mr Puigdemont’s event. We have invited him as a guest for a speaker meeting, rather than a debate, and as such he shall be appearing alone. As always, that does not mean that our members cannot come to the event and challenge his views should they wish.”

The letter follows a similar letter, sent to Professor Stephen Toope, Vice-Chancellor of the University of Cambridge, signed by over 150 professors, expressing their “disappointment” at the university’s decision to arrange and advertise talks on Catalan politics by Mr Aamer Anwar, lawyer and Rector of the University of Glasgow, and Mr Quim Torra, President of the Generalitat de Catalunya, both of whom they have dubbed “xenophobic”.

The authors of the letter hope that it will encourage the Union to “enhance access to this information and to a balanced account of events.” The signatories also offer their expertise for any presentations of debates on the subject area.

The earlier letter stated: “Mr Torra has a long history of xenophobic views that we believe is completely at odds
with the ethos of your venerable institution.”

The letter concluded: “We politely request your institution to explicitly disassociate itself from the claims and views that these one-sided events are likely to air and disseminate. Equally, we would like to have an opportunity to respectfully present the views of those Catalans who have been silenced by the official machinery of the Generalitat and its many branches, in Catalonia, in Spain and abroad.”

The full letter sent to the Oxford Union can be found here.