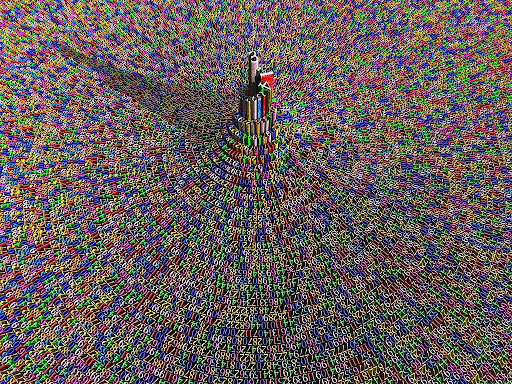 Image Description: The numbers of pi

After 3 years, the world record for the number of digits of 𝝅 (pi) that have been calculated has been broken by computer scientist Emma Haruka Iwao, using Google’s cloud based ‘Compute Engine’, putting the record at roughly 31.4 trillion digits, and beating the previous record by nearly 9 trillion digits.

Simply stated, 𝝅 is the ratio of the circumference to the diameter of any circle. The digits of 𝝅 never repeat and have no pattern. The earliest references to the number date back nearly 4,000 years. Because π comes up repeatedly in the field of geometry, ancient civilizations sought accurate approximations of the number for its use in construction.

A clay tablet from ancient Babylon has the value of 𝝅 at 3.125, and the Rhind papyrus from ancient Egypt takes 𝝅 to be about 3.1605, not too far off the true value of 3.1415… It is suggested by some Egyptologists that in building the Great Pyramid of Giza, the ancient Egyptians used a common approximation of 𝝅: 22/7, but this claim is met with scepticism.

By 0 AD the best approximation comes from Archimedes, who calculated 𝝅 correct to 2 decimal places. Eventually the calculation methods for 𝝅 moved from being geometrical to being more theoretical, and in 1400, Madhava of Sangamagrama used infinite power series to calculate 𝝅 to 10 decimal places.

With improving calculation methods, the record was slowly increased through the centuries. A previous record of 152 digits in the late 18th century, comes from an anonymous manuscript that was found in the Radcliffe library in Oxford.

In the 1950s we reached the age of electronics, and suddenly the numbers of digits skyrocketed. By 1989, David and Gregory Chudnovsky had reached 1 billion digits, using their own ‘Chudnovsky Algorithm’, which made computer calculation of the constant more efficient than previous methods.

The algorithm essentially uses an identity which equates the value of an infinitely large sum of numbers to 1/𝝅. Fortunately, successive terms of the sum become very small very quickly, so the sum rapidly converges to 1/𝝅. The Chudnovsky formula is an example of a more general type of infinite sums involving 𝝅 called Ramanujan-Sato series.

I expect that while humans continue to make faster and faster computers, we will continue to compute 𝝅 to an excessively large number of digits.

Google’s record was made possible using a specialized programme developed by Alexander Yee, called y-cruncher, which has been responsible for the past six records.

Despite the record only being announced by Google on the 14th of March (3/14, or Pi day, in USA), the programme was actually started in September of 2018, and ran for more than 120 days.

The computer scientist and developer advocate behind the project, Emma Haruka Iwao, said in an interview with Forbes, that she had been inspired at a young age by Japanese mathematicians Yasumasa Kanada and Daisuke Takahashi, who are responsible for many of the previous records.

In truth engineers, physicists and astronomers never need more than a few digits in their calculations to have the precision they need. But there is still a use in all the digits; testing computers.

The y-cruncher algorithm used by Google is also used as a benchmark test for computers. The calculations the algorithm uses are perfect for stress-testing systems to see how they perform.

But despite the accuracy to which we now know 𝝅, it doesn’t get us any closer to discovering the secrets of 𝝅. It wasn’t even until 1882 that Lindemann proved that 𝝅 was transcendental (a type of number which cannot be the root of a non-zero finite integer polynomial) an idea that was suggested by Euler more than a century before. It is still unknown today whether 𝝅 is normal; that is, that each digit 0-9 has an equal chance of appearance. It is generally thought that 𝝅 is normal, but just calculating digits just won’t suffice as a proof.

Where next for the famed constant 𝝅? I expect that while humans continue to make faster and faster computers, we will continue to compute 𝝅 to an excessively large number of digits.