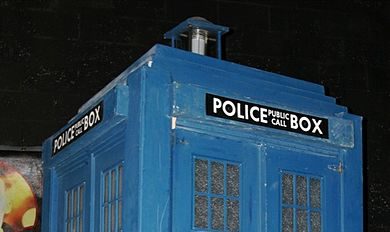 1989 was one hell of a year. In international politics, the Berlin Wall fell after 28 years, one of a series of events that would see the end of the Soviet Union, while Brie Larson, of Captain Marvel fame, was born. Here in Oxford, in Hilary Term, something else was born, the Oxford Doctor Who Society. Unfortunately for the members of the nascent society, some wibbly-wobbly timey-wimeyness was afoot, as 1989 was also the year Doctor Who was cancelled. Not the greatest of starts, then…

So what has the Society been doing for the past 30 years? Well, in addition to surviving the wilderness years (1989-2005, when the show was off the air), seeing the show reborn, and welcoming seven new Doctors into the world, the society continues in the noble traditions set down by its founders all that time ago. You may not be surprised to hear that we’ve been watching episodes of Doctor Who, from the 1960’s all the way to the present day. We see the highs and the lows, often accompanied by some good-natured ribbing of the wobbly sets, at times nonsensical dialogue, or the many permutations of the phrase ‘Gone too far.’ Afterwards, we often retire to the pub for further conversation, like debating the relative merits of Kill the Moon, joking about Lungbarrow, or making predictions about the new series. It may sound a bit involved, but we have a range of members, from those who can recite every episode by name to those who came along with friends and decided to stick around!

We see the highs and the lows, often accompanied by some good-natured ribbing of the wobbly sets, at times nonsensical dialogue, or the many permutations of the phrase ‘Gone too far.’

But WhoSoc is much more than just a place to watch Doctor Who. We’re very keen on quizzes (we count a Mastermind champion among our members, you know), being the hosts of the termly 5th week Geek Quiz, where we, along with other geeky societies like TrekSoc and LegoSoc, put our pop culture knowledge to the test! If you know your Klingons from Kasterborous, then we’d recommend you pop down – it’s open to all! We also often see the societies on our crewdates, which are a much tamer affair (mostly) than what you may be used to! Back to the quizzes, we also compete in Varsity Quizzes against our Cambridge counterparts, with the innings currently tied at 2-2, while there are regular trips to London for the national Quiz of Rassilon, where we often rank in the top three!

Speakers are another key part of our term cards, and we’ve had writers, actors, and various other members of the Doctor Who community come to talk about their contributions and careers, such as Rob Shearman (writer of Christopher Eccleston episode Dalek) or Simon Guerrier (writer of various books, comics and audios). There’s also trips to sites of Doctor Who fame, especially Cardiff, while our shit-posting group is very popular. We also have a place for anyone who wants to try their hand at writing, with our magazine, The Tides of Time, having run since 1990, nearly as long as the society itself! Not to blow our own trumpet, but given our members have gone on to write books and Doctor Who Magazine articles, we’d like to think we are something of a gold standard.

But despite everything you’ve just read, there’s a more important thing that WhoSoc is. It’s a place to make friends, somewhere you can meet up with like-minded people to discuss the things you enjoy in a supportive atmosphere. This may sound like a standard platitude, but I speak from experience. WhoSoc has helped me come out of my shell at University, and develop into the person I am now, while giving me a bunch of friends who I know I’ll keep in touch with. I’m not going to pretend we’re as rich as the Oxford Union, or as influential as the political societies, but we’re also not going to drag you down with backstabbing and bickering. We’re a bunch of people who like Doctor Who, and get together to appreciate it. And I don’t think you can ask for more than that!

If this sounds like your kind of thing, then please come along to one of our weekly meetings in term time (currently Thursday 8pm at Corpus Christi), or get in touch with us by Facebook, Twitter, or our email at: [email protected] . We always love to see new people, so come and join us to celebrate our 30th year!

Photo credit: Clare A was W