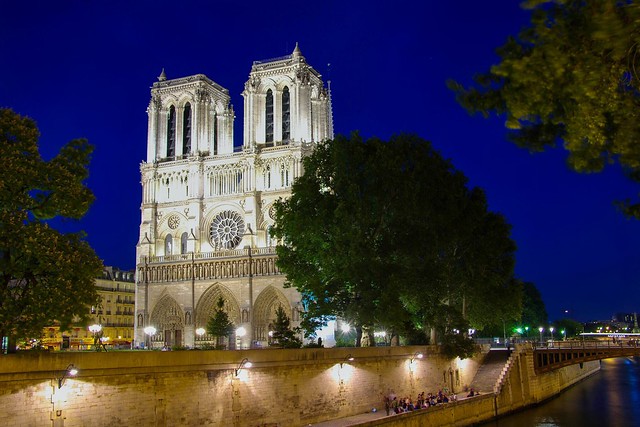 Cathedrals dominate the skylines of most English towns and cities. Wonders of the medieval world, they are one of the most impressive reminders of “the Dark Ages”. They were constructed when most people would have lived in wooden hovels, which makes them the more remarkable. Despite that, modern attitudes towards the buildings have invariably changed from those of our forebears: once considered showcases of God’s kingdom on earth, cathedrals are now regarded merely as tourist attractions and, perhaps with a romantic flavour, as anachronistic constructions in the era of the skyscraper. Yet, in light of the sad events at Notre Dame of Paris last April it is important to remind ourselves about the fundamental importance of preserving such amazing constructions.

Cathedral-building was a european-wide phenomenon since the early Middle Ages, having its antecessor in the wide-spaced and richly-decorated Roman basilica. The noun cathedral itself comes from the Latin cathedra, which means “seat”. The name is not fortuitous: the head of the diocese, the bishop, has his chair in the building’s premises. As a result, the temple acts as the central church for the region concerned. Cathedrals are not stones haphazardly placed on top of each other, but testaments in stone and witnesses to our European identity. They are characteristically European constructions, grown out of the ashes of the Roman Empire as a symbol of renewal and endurance. It just suffices to say that in our country the construction of cathedrals was only started, in line with European artistic developments, after Christianity’s arrival from Europe in the late sixth century. In terms of cathedrals, it is undeniable that we share the same identity with those beyond the channel.

Yet, in light of the sad events at Notre Dame of Paris in April it is important to remind ourselves about the fundamental importance of preserving such amazing constructions.

Moreover, cathedrals provide us with credible sources to understand our past. In fact, each temple is a palimpsest. As an onion, they are showcases of superimposed histories. Looking at the stone is like reading a thrilling biography: one can understand the development of both building and society through the ages. In southern Spain’s Cordoba Mosque-Cathedral, for example, the unique coexistence of Moorish, Christian gothic and renaissance architecture is patently evident. Above all, in the Spanish context Cordoba’s or Seville’s cathedrals are powerful symbols of the return of Christianity to Iberia. In short, the re-adaptation of Muslim temples for Christian worship is a powerful reminder of the Christian and Muslim past of modern-day Spain. Closer to Oxford, at Christ Church we can glimpse the rare “survival” of St Thomas Becket in stained glass: contrary to Henry VIII’s orders, the cathedral has the oldest extant (faceless!) depiction of the twelfth-century martyr archbishop of Canterbury in Britain. Isn’t it unique evidence of the prevalence of a traditional Catholic community in our city in the early sixteenth century religious reformation?

Lastly, as with medieval monastic houses we should be grateful towards the scholarly endeavours which cathedrals pursued through the ages. Before the fifteenth century there was neither printing technology nor libraries abounded. Since the most learned would be members of the church, books would be copied and youngsters trained with them, either in monasteries or cathedrals. Since so much priceless material was lost in England during the sixteenth-century “Dissolution of the Monasteries” we tend to focus on monastic houses as the only institutions in which ancient wisdom was preserved during the medieval period. True, they were vital, but we tend to forget that cathedrals themselves would also have lively working scriptoria and libraries. For example, Hereford Cathedral’s mappa mundi is the oldest known complete extant map of the medieval world. A great deal of our current understanding of the world passed through the quills of those working and living in cathedrals!

Therefore, we need to honour and preserve our cathedrae. For some they may be the House of God, for some they were   ancient houses of wisdom, and for all they must be powerful and compelling reminders of our shared European roots in this time of division.  They are not merely tourist attractions, but are pumpers of faith, connecting millions of believers. If you are an atheist that is fine: but cathedrals have been symbols of national unity and preservers of wisdom for many years, even millennia. We should, therefore, recognise and celebrate both their religious and secular relevance. It is for that reason that Notre Dame’s reconstruction should concern not only the French, but all of us. It is just and necessary.