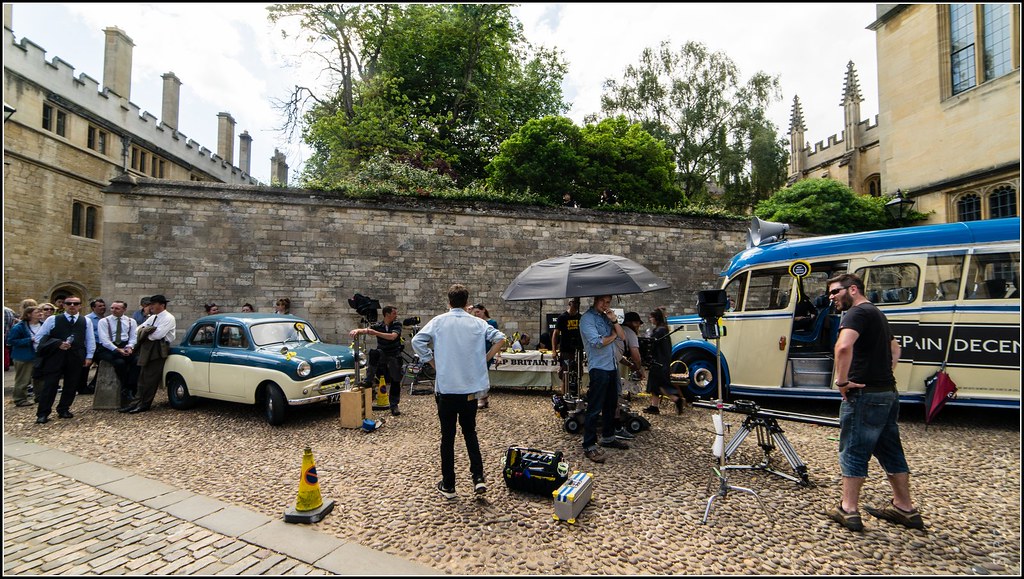 Growing up in Cardiff, I became quite used to the sight of a television crew set up ready to film one of BBC Wales’s successful shows. I remember how natural it felt when one day after primary school my friends and I took a detour with our parents to see Doctor Who and his Tardis at the local park. Later, now in sixth form, I found myself watching Benedict Cumberbatch, Martin Freeman and others in the Sherlock cast filming at a local housing estate.

When I headed off to Oxford for my first year I wasn’t expecting the joyous sport that is, essentially, film crew stalking to be something I could continue practicing. However, I was pleasantly surprised to find Oxford was perhaps an even more popular destination for filming. Watching a film crew at work is an exciting opportunity for anyone with an interest in working behind the camera to gain an insight into such work. For certain, my enjoyment of watching the various crews I’d seen throughout my life led to me getting involved in student film.

If you do get the chance to see a film crew at work, there are some things you must take into consideration whilst you watch. Often, crowds of people watching a film set can become an issue for the actors and crew involved, so one needs to be mindful of not getting in their way. Personal excitement also has to be quietened for moments in which filming occurs, or else audio is ruined.

Quite often it can be unclear what is being filmed. Sets are arranged and establishing shots are taken often before any main actors arrive to make a production recognisable. To find out what is being filmed, it is worth asking the security guards present. Although guards don’t always know the title – and often aren’t supposed to let you know – project titles especially for television shows can often be drawn from them with a few polite words which acknowledge the secrecy of the situation, but still express an interest.

Below I list a few of the shows I’ve seen whilst following the above advice.

On leaving the Rad Cam one day early last term, I turned towards Brasenose Lane only to find a film crew partially blocking the way, and Jodie Comer casually wandering around awaiting a call to action. At the time I hadn’t actually seen Killing Eve, but the excitement of some other students who’d run out of Brasenose especially to see the filming of the second season encouraged me to watch it, and I now can say I’m greatly looking forward to seeing this scene along with many more in the new series.

ITV’s long running obsession over the Oxford based Morse has meant that for decades the city has hosted the film crews of Inspector Morse, Lewis, and now currently Endeavour. This series is easily recognisable when filming owing to its dedication to dressing all streets, colleges and shops to fit its period setting of 1960s-70s Britain.

This period piece was the first film set I happened upon when in Oxford. Also shot on Brasenose Lane, I remember this set surprised me by how a big scale movie crew were willing for so many students, tourists and other passers by to trample through their space in order to use the Lane, with only short periods in which they were stopped so that the crew could film.

As quite the opposite to the openness of the Tolkien filming, I include Mamma Mia 2 here more because I knew that it was going on rather than because I saw it being filmed. A substantially larger production to the rest listed here, the secrecy surrounding this film was incredibly high. Despite New College Lane and Queen’s Lane being shut to all other than those who needed access, news of the production still spread as students with rooms that looked down on the areas being filmed were able to inform others of what was going on through Twitter.

Scenes for the BBC’s new series based on Philip Pullman’s series of books were also filmed in New College Lane last summer under a similar veil of set secrecy. With students not in their rooms over the vacation, no details about these sets emerged online. However, I live in hope there will be more chances to spy on this production as it is already promised 3 series from the BBC, and based on the book narrative, they should have to return to Oxford for some of this content.

Oxford clearly proves to be a popular location for crews of all levels of television and film production. Whether you have an interest in seeing famous faces, finding out new plot points to your favourite shows, or watching how crews work, it is certainly worth being curious when you happen across some trucks, cameras and lighting on your way to the library.

Sunny-side up: A Day in the Death of Joe Egg at the BT