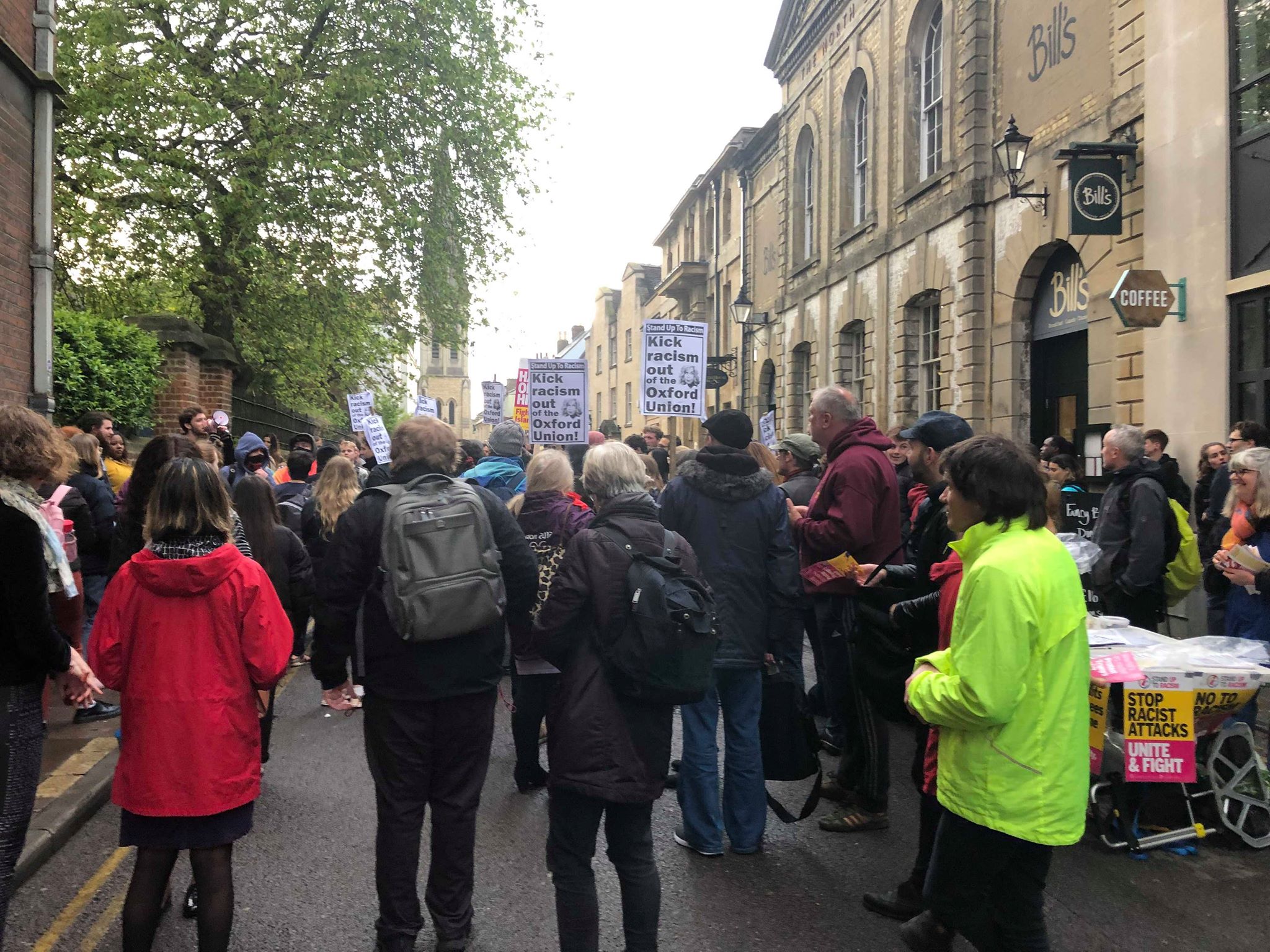 Katie Hopkins and free speech law in the UK

Image Description: Protesters outside the Oxford Union during Hopkins’ debate.

I was planning to write this week’s column about tax avoidance, the ancient legal concept of the trust, and how it is used to keep money away from the tax man. Then Katie Hopkins turned up, and it seemed silly not to talk about freedom of speech instead.

As is always the case, the arrival of a right-wing talking head to the Oxford Union prompted measured discussion in some quarters and violent opposition in others. There was a protest, ostensibly associated with the “boycott the Oxford Union” movement, a few self-righteous facebook posts, and the whole thing was forgotten a few days later amidst our oppressive regime of deadlines, labs and lectures.

Our focus today isn’t on the question of whether the Union was right to invite Hopkins or not, but instead to have a look at the laws on freedom of speech in the UK and whether the correct balance is struck between a person’s right to express themselves and the public interest in preventing those expressions from harming others. The last thing I’ll look at is the potential liabilities for both Hopkins herself and the protesting crowd.

This is an incredibly important point that is often missed when we debate free speech in the UK: we have no legal provision that protects our right to “say whatever we want”.

Unlike the United States, where the 1st Amendment to the constitution protects freedom of expression and religious worship from government restrictions, there is no absolute right to freedom of speech or expression in the UK. There are a number of protections for free speech that operate, most notably Article 10 of the European Convention on Human Rights (ECHR), but they are all laden with qualifications and limitations. As an example, Article 10 states that free speech can be restricted by a government in a number of situations, including (but not limited to): when it is necessary in a democratic society, for the prevention of disorder or crime, or (as Tommy Robinson has probably now realised) for maintaining the impartiality of the judiciary.

This is an incredibly important point that is often missed when we debate free speech in the UK: we have no legal provision that protects your right to “say whatever you want”, and Article 10 actually states that the limited version of the right that we have “carries with it duties and responsibilities”.

The classic response is to argue that the UK needs a written constitution to protect such rights (in the US style), and there are two main counter-arguments to such a proposition. The first is largely academic, and essentially asks whether it would even be possible to write a binding constitution in English and Welsh law (the answer: yes, but also no); the second is more interesting, and is essentially a question of whether an absolute protection of certain rights would even be a good thing.

In Buckley v Valeo, the US Supreme court confirmed that political spending was a form of expression, and so any limitation on it was unconstitutional. The result over the last 50 years has been the complete monetisation of American politics: election spending has spiralled out of control. The 2008 race between Barack Obama and John McCain was the first billion-dollar presidential election (the combined totals for presidential and congressional elections has exceeded $1 billion for a great deal longer), and in 2016 the price-tag was $2.4 billion.

Contrast this to the decision made by our House of Lords (the case was heard a year or so before the UK Supreme Court became operational) in Animal Defenders. The 2003 Communications Act bans political advertising on television, and the House of Lords found that this did not infringe the Article 10 right to freedom of expression.

In her judgment, after discussing the problems that unlimited campaign spending presented in the US, the iconic Baroness Hale stated that:

“In the United Kingdom, and elsewhere in Europe, we do not want our government or its policies to be decided by the highest spenders… this case is not just about permissible restrictions on freedom of expression. It is about striking the right balance between the two most important components of a democracy: freedom of expression and voter equality.”

Hopkins has been before a judge on a number of occasions, usually defending her statements, and usually losing.

This neatly encapsulates the British attitude towards freedom of speech versus the American one – our law focuses on the balancing act between various rights (recognising them all as important) rather than a hierarchy between them.

So where does all this leave Katie Hopkins? Hopkins has been before a judge on a number of occasions, usually defending her statements, and usually losing. The only instance I could find of her winning in court was last year, when the Daily Mirror incorrectly reported that she had been detained by South African authorities for taking ketamine. The truth, Hopkins insisted, was that they had detained her for spreading racial hatred. The Mirror quickly published an apology and a correction. Hopkins has been producing hate speech on an industrial scale for around a decade, and it isn’t controversial to suggest that a lot of the things that she says are illegal.

The protesters outside the Union ought to take care that they don’t fall foul of the law either. Whilst the right to protest peacefully is given the same limited protection by the ECHR as the right to freedom of expression, English and Welsh law does not take kindly to those that incite violence. The words “Build a bonfire, build a bonfire, put the Union on the top, put the Nazis in the middle and we’ll burn the fucking lot” actually constitute a criminal offence under section 4A of the Public Order Act 1986, an offence that (as of 2012) carries an unlimited fine and a maximum 6 month prison sentence.