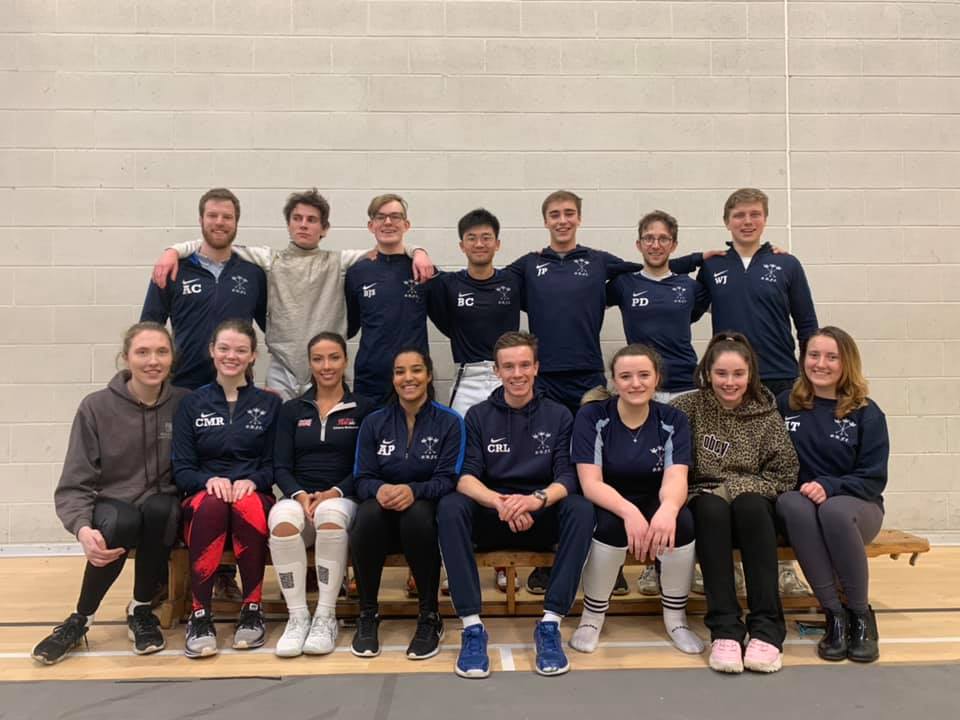 This year has seen one of the most successful seasons in recent OUFC history. Within Oxford, fencing remains one of the most popular sports for beginners, with the club recording over 500 signups at Freshers Fair. With four teams in BUCS, fencing was Oxford’s highest scoring sport in BUCS this season, scoring 179 BUCS points, and this included an undefeated weekend of league matches for both the Men’s and Women’s Blues.

The Women’s Blues continued their recent dominance of the Premier South league, winning the league for the third year in a row. The Men’s Blues showed strong improvement, going from 4thin the Premier South league last season to a strong 2ndplace finish this season. Individually, the men also had some strong performances – particularly at BUCS Individuals, where Joe Pocknell won the men’s sabre, and captain Christian Lindsay finished in the top 8.

Although the men’s Championship run ended with a quarter-final loss to eventual winners Durham, the women continued their strong form all the way to the Championship final, beating Imperial and Durham along the way. This made the Women’s Blues the only Oxford team to reach a BUCS Championship final this season.

Individually, the stand-out member of the Women’s Blues was Chiara McDermott, who finishes the season with medals from the Commonwealth Games, Senior 5 Nations, and British National Championships.

The 112thVarsity Fencing match was a huge success for OUFC. Each match involves a team relay to 45 points in each of the three weapons (foil, épée, and sabre) – the winner is the team with the most points overall. Having won both Women’s Blues and Seconds last year, OUFC were keen to improve on this and did so in what proved to be one of our most successful Varsities ever.

The day started off with an extremely tense match for the Men’s Seconds, who fenced hard but ultimately lost by just 7 points. The tension continued into the first weapon of the Women’s Blues match, where a strong performance from Cambridge left Oxford with a sixteen-point deficit, but this was quickly resolved with clinical performances from the women’s foil and sabre teams, who won their weapons 45-15 and 45-21, respectively. The Women’s Seconds were dominant throughout their match, winning 134-70 overall and having won the match before even fencing the third weapon. The Men’s Blues began with a cagey foil match, with Cambridge winning the foil by just one point. However, Oxford quickly rallied to win both foil and sabre, winning the overall match by 134-96.

This Varsity was the first in over a decade where Oxford took both the Men’s and Women’s Blues titles, and was a fitting end to one of OUFC’s strongest seasons in history.