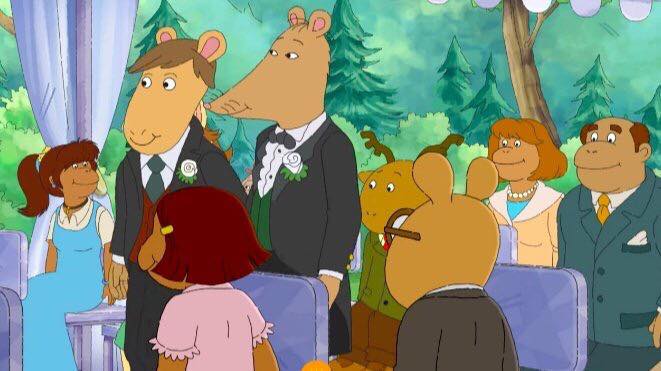 “Queer representation in the media is not a choice, it’s a necessity”

“Arthur”, a children’s television show airing since the 90s, kicked off its twenty-second season with a homosexual wedding between the main character’s teacher Mr. Ratburn and his husband Patrick. Arthur the aardvark begins the episode by trying to guess who the bride-to-be is but is surprised to find out the bride is actually a groom. Rather than reacting with disdain however, Arthur and his friends are simply pleased to see how happy their teacher is on his big day.

Its successful airing on television shows how times are changing for the better. The “Arthur” franchise has represented lgbtq+ voices in the past, but responses were a lot less accepting than they are today. In a spinoff series called “Postcards from Buster” which aired in 2005, a lesbian couple is featured in an episode called “Sugartime”.

Rather than the generally warm reception Mr. Ratburn got however, the episode got almost immediately pulled off the air due to pressure from Margaret Spellings who was the Secretary of Education in the USA from 2005-2009. The survival of Mr. Ratburn’s story on mainstream media is testimony to the progress legislation has made at reducing the stigma, and increasing the rights, of the lgbtq+ community.

Children’s television shows should reflect the diversity of voices and experiences existing in society, especially those that are often forgotten or silenced by the mainstream media. The episode is a step in the right direction to normalising the lgbtq+ community by depicting them in the joyous context of marriage rather than the threats and dangers normally shown on the news for example.

Queer representation will not make your child gay

Homophobia and hatred are not innate, no one comes out of the womb hating gay people. It is important to teach children as soon as possible that differences aren’t to be feared. “Arthur” depicts the gay marriage in a way that simultaneously acknowledges the stereotypes and assumptions surrounding weddings yet collapses the heteronormative tropes in an educational way. Francine for example comments “but there’s one thing teachers should never, ever do”, which echoes homophobic opinion and discourse, creating a certain amount of suspense about what she will say next. It soon becomes clear however that Francine is actually more worried about her teacher’s dad-dancing than the fact that he is marrying a man.

His gay identity isn’t even given the opportunity to seem controversial since it is represented so casually. Homophobia is almost parodied and made to seem irrational due to the utter nonchalance of the characters. Child viewers are exposed to gay representation, and lgbt identities immediately become less abnormal and intimidating due to their casual presentation in a comfortable context.

For a lot of lgbtq+ people, including myself, we can be made more confused about our identities due to the utter lack of representation in the media. There is no one to look at onscreen who expresses our feelings or embodies who we feel we are. There are not many people to show us in the media, especially children’s media, that lgbt people and identities even exist.

Queer representation will not make your child gay, seeing two male aardvarks getting married simply cannot make your child attracted to their own sex. It will however give them a more empathetic understanding to the variety of people who exist in the world and make them more comfortable with themselves and their identity, if they do eventually decide they fall under the lgbtq+ umbrella.

We exist in the world whether people like it or not, so there’s no point in denying that we exist on TV. Queer representation is not a director’s choice, it is fundamental and a necessity.