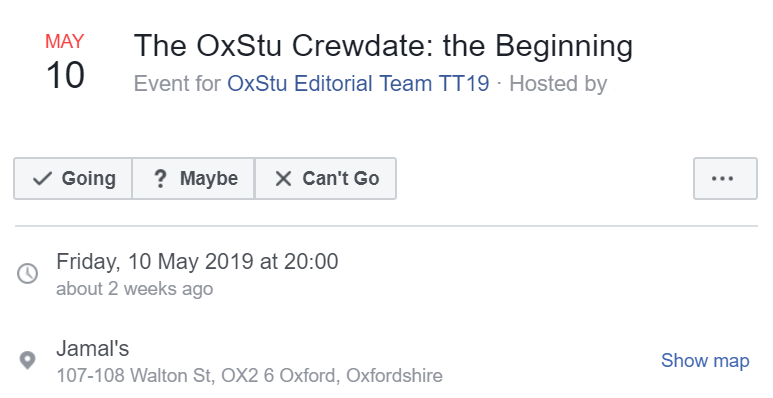 College. It’s the place we all feel most at home. It’s where we first meet all our friends in Freshers’ Week. It’s where we spend hours slogging away at essays, then go to our friends’ rooms to pre before we hit Bridge. For many, college is everything they know and experience of Oxford, the be-all-and-end-all of the city. It’s not an uncommon feeling, and we can all relate to it on some level. But given the variety of opportunities in Oxford, it’s worth asking if this is really the best way to fully appreciate the University, a place which can broaden your horizons so much, and give you so many varied, new experiences.

Step into the Freshers’ Fair, and you will be confronted with an impossible amount of information to process. You’ve barely walked through the doors of the towering limestone archway of Exam Schools and people are asking for your email address, name, and college, and asking you endless small-talk questions to try and win you over onto whatever scheme they might be pushing. This is, of course, assuming you can hear them over the voices ringing in your ears, and make their stall out properly amongst the bustling bodies and vibrant colours blazing around you from all sides. And if that wasn’t enough, there’s the Stare. Yes, the Stare. That hopeful, obliging gaze which the Exec of Society X awkwardly shoots your way with a smile of intolerable anguish and tiredness from all the times they’ve had to force the words “Hiya! How’s it going? Can I interest you in this?” from their weary lips. You don’t want to make their day any worse, but at the same time, you’re not sure how bothered you are about train-spotting.

Be it a sport, a play, a student newspaper, a band, playing with a construction toy for an hour (shoutout to Lego Soc- you guys are the best)

It can be really difficult to know where to start with extra-curricular stuff outside college, especially if you’re a fresher, and you’re still reeling a bit from starting uni, meeting so many people so fast, and, well, everything. The whole thing is a completely exhausting experience, and you barely have enough energy to stay awake, let alone explore yet more unfamiliar things. College and the friends you’ve made there are what little shelter you have from the unrelenting, overwhelming storm that is Oxford.

If this picture is too grim to make branching out of college look manageable, this is only because I’m painting it through my memories of being a fresher. I am now in third year, and things could hardly be more different. The thing is, college is essentially a small, unchanging group of people doing largely the same things, in the same places, in the same ways, for three years. For anyone who socialises exclusively in college, this is not meant as an insult. Feeling a sense of belonging, stability and unity with the people you live near and spend your life with is really important, and it’s something I’ve been grateful for during my time here. It’s how most of us feel when we’re at school, and what we miss at the very start of uni.

But for a lot of people, there’s only so much time you can spend in one unvarying atmosphere before it all starts to feel a bit samey, and the novelty which made first year so stimulating turns into stagnation later on. That’s where extra-curriculars really come into their own. That apprehension that you’ll never really know someone who’s not at the same college as you, which you might have had earlier on in your degree, doesn’t last long when you find an activity which you really connect with, and get well and truly stuck in. Be it a sport, a play, a student newspaper, a band, playing with a construction toy for an hour (shoutout to Lego Soc- you guys are the best), or indeed all of these things, when you work in a team with other people on a project you all care about, it gives you that same intense, shared novelty that made freshers so great.

The thing is, college is essentially a small, unchanging group of people doing largely the same things, in the same places, in the same ways, for three years

Get involved with a society you really like, and you’ll soon find your Google Calendar filling itself up with crew dates, socials and the like. Until last week, I hadn’t been out three times in four days since Freshers’ Week, and it wasn’t exactly an unpleasant experience to reacquaint myself with. Play your cards right, and you’ll be constantly travelling across Oxford, moving between different spaces, mixing in different circles, discovering different, fascinating worlds you didn’t even know existed, but have been right under your nose the whole time.

If you get really creative, you can even mix them. “Social glue” isn’t a term to be used lightly, but if you bring your society friends to the college bar, introduce them to your college friends, and you all go to Bridge together, then you have as much of a right to call yourself this as anyone. Seemingly separate worlds can mesh together into a bigger community, and humanise a city which, despite its already small size, too often feels atomised and divided.

College is a cosy home, an anchor of stability in an intense, defamiliarising place which can leave us too tired to leave this home. But it’s not everything, and staying there all the time can make you miss out on so many amazing, stimulating experiences in this city which you might never have thought about, but will never forget, and never regret. So, next time you see that email or Facebook notification about auditions, exec applications, or just the next meeting, don’t ignore it. Say yes to a society; say yes to Oxford.