Warning: mysqli_query(): (HY000/1030): Got error 28 from storage engine in /home/oxfordst/public_html/wp-includes/wp-db.php on line 2007
 Preview: The Reunion at the BT impresses with its chaotic dark humour – The Oxford Student
Skip to content 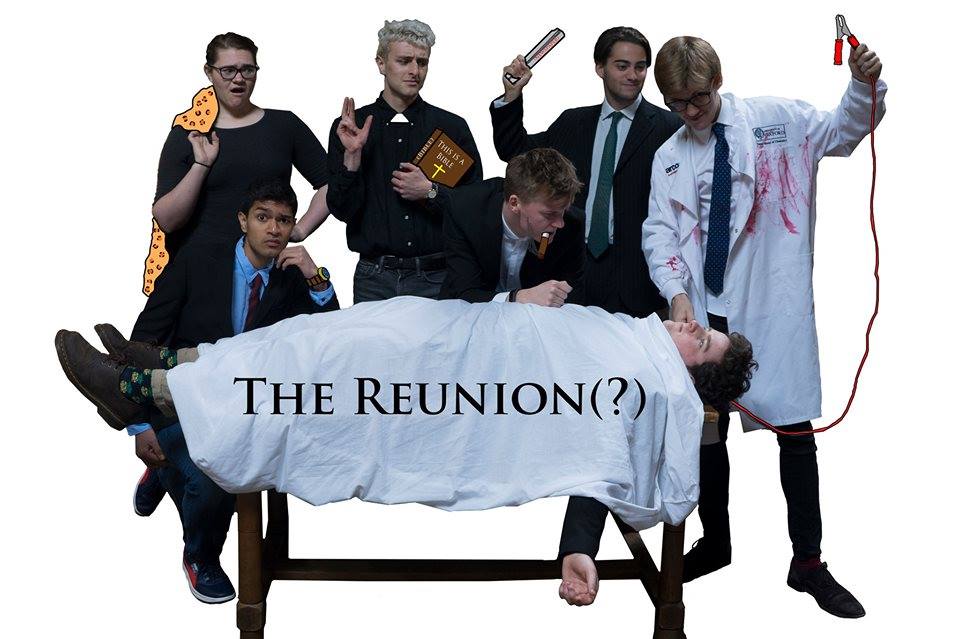 Sizzling with chaotic, hilarious energy, ‘The Reunion’ promises to be an electric piece of theatre. Written, directed and masterminded by Tommy Hurst and Bernard Visser, the premise surrounds two funeral directors (satirically named Hearse and Cloak) attempting to piece together the story behind the death of a recently deceased big shot criminal Sebastian Coxcomb.

This might seem conventional enough, poised as a kind of campy murder mystery with an assortment of lively stock characters each arriving with conflicting accounts of Coxcomb’s life. But Hurst and Visser are well aware of the tropes they are working with. These characters grew from initial archetypes (‘wife’, ‘daughter’, ‘husband’, ‘priest’ – a bit like the set-up of a ‘walks into a bar’ joke) which, as the play progresses, are all pushed to the point of dramatic extremity. As such, the playwrights interrogate these apparent clichés by revelling in their inherent comedic potential and absurdity.

Bernard Visser informed me the intention is that, as the story moves forward, the respectable front that each character initially presents will gradually and amusingly unravel. The gothic set design will mirror this tone; a mixture of Victorian and modern pieces to create an atemporal space where the façade of formality is equally stripped back to its absurd roots.

“It is refreshing to see a play so clearly attuned to the delights of dark comedy.”

What struck me in particular (in the snippet of the play that I experienced), was the covered body of Coxcomb lying prostate on a table and acting as an eerie centrepiece. At one point in the scene his hand drops suddenly from the side of this table and formalities shift into heightened, panicked responses from the characters (and what I’m certain will elicit big laughs from the audience).

It is refreshing to see a play so clearly attuned to the delights of dark comedy; in making us laugh at the morbid, the overall feeling is one of devilish catharsis. As one of the characters remarks, what started as an ordinary day is now “a chaotic confusion of a morning” – but crucially, at least for an audience, there is pleasure in this chaos.

But I also get the impression that this play is a pleasure to perform. The fast-paced, energetic dialogue between the mesh of characters is interspersed with one-on-one monologues delivered directly to the audience: every actor gets their moment to comedically shine – quite literally – in the spotlight. I was impressed with Sophia Goettke’s Elaine, whose monologue is divided between absurd, performative grief and sardonic asides that suggest darker, ulterior motives for her presence at the funeral parlour.

“The experience of watching this play will be like downing six double espressos with a side of adrenaline – buzzing with energy and not to be missed.”

Equally, the farcical nature of Hearse and Cloak’s attempts to get a hold over the ever-spiralling situation, admirably performed by Angus Moore and Tom Saer respectively, were also particular highlights of the scenes that I watched. But all of the cast are strong, and the playfulness and enjoyment each actor shows for their role is palpable. You really get the sense that this has been a collaborative project between writers and actors: Hurst and Visser mentioned to me that a number of the lines were born out of improvisations that worked their way into the script.

And perhaps most importantly, this play is full to the brim with snappy, metatheatrical dialogue and humorous wordplay – almost every line delivered is rich with comedy. I won’t lie – some of the jokes definitely flew over my head. But this is not a criticism: instead, I get the impression that this is precisely the point. The script is so evidently full of wit delivered to the audience at a spitfire rate that it is impossible not to miss some of the more esoteric references.

But equally it is impossible not get something out of it. Hurst and Visser show great trust in their audience by refusing to underestimate their intelligence: heads will roll with laughter. Overall, the experience of watching this play (much like how I get the impression the script was written) will be like downing six double espressos with a side of adrenaline – buzzing with energy, and not to be missed.

The Reunion will be showing at The Oxford Playhouse from Tuesday 28th May to Saturday 1st June. You can purchase tickets here.