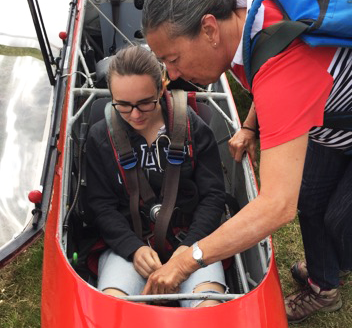 “Make sure you don’t put your parachute on the ground. It might not open when it’s wet.” We’re speeding up St Giles on the bus to Bicester and Tor can see I’m starting to panic. He reassures me, “don’t worry, no one ever has to use them.” I’m with Tor Walberg, former president of Oxford University Gliding Club. He’s also winner of the Sports Ball’s Contribution to Sport Award, which he claims is bizarre, though given that he’s agreed to take an afternoon out to take me gliding, and that his eyes light up when talking about planes in a way they just… don’t when the topic switches to his degree suggests the award isn’t as bonkers as he thinks it is.

As I’ve discovered by the time we get to the airfield however, gliding is absolutely as bonkers as I think it is. The glider is a plane without an engine that catches thermals to stay airborne. To get up, the plane is tied to a mile-long rope that is pulled along and then flung into the air by a winch. On a lucky day you could be up for hours. On a bad one, you’re down in five minutes.

Tor is still explaining how different clouds create different air currents as we pile into the car that takes us to the gliders from the ex-RAF quarters at the gate. He laughs at me, but gently, as I go to put my seat belt on. “There’s nothing to hit out here. It’ll be weird when I learn to drive on the roads, I’m so used to looking up.” This isn’t exactly reassuring, but we’re over at the bus, which is where the gliders take off from, before I know it. It’s impossible not to be charmed by the set-up. I dont know what I was expecting, but it’s literally a disused bus, with tables put between the seats, a few board games and hot drinks with an honesty box. It takes a surprising amount of teamwork to get a plane off the ground (usually you need someone at the winch, someone to tie the cable, someone on the radio and, if you’re me, a volunteer instructor) so I have plenty of time to listen to the Alpha-Delta-ing going on over the comms and talk to some of the people there. There are a couple of other Oxford students there, some ex-servicemen who seem to be in charge and a commercial pilot who Tor is talking to about his thesis (which will be, of course, about pilots). There are some younger guys there two, who race the planes long distance and are full of stories about losing 1000m of height in a rainstorm or landing in fields. It’s a nice mix of relaxed and professional that puts me so much at ease that by the time it’s my turn I’m quite excited.

Predictably, the excitement turns to terror the second I strap on the parachute. My instructor, Paula, is a woman, which I’m secretly pleased about. I ask her how she got into it. “My first boyfriend took me gliding when I was sixteen.” Clearly the flying outlasted the first boyfriend – she was the first woman to fully qualify as an instructor in the RAF reserves and her daughter glides for the national team. We don’t have long to talk though, because all too soon the winch is beginning to tug the plane forward. What starts out slow turns into a rush of air. The G-force is so great I feel like I’m lying down, and suddenly my instructor is telling me to look and we’re in the air. The feeling is incredible. Paula is explaining to me how much of the horizon to keep in sight and how to turn the plane and gives me the control. I’m actually flying… at least until I tilt the plane too far and Paula gently takes back control, leaving me to watch the fields pass and notice the details of the driveways as we circle back round to make a perfect landing at the bus. I’ve clearly got a long way to go, but I get out of the plane beaming.

There’s just time for a quick tour of the hangar with its original planes, including WW2 trainer planes, a scout used to spot artillery, a transatlantic racer from the 1930s and the odd crazy contraption (a light aircraft with no windshield gets a dark look even from Tor) before we get back on the bus to Oxford. By the time we’re back on St Giles I’m already wondering when I’ll get to go gliding again.