When a sculpture or a painting is culturally valued, it is exhibited in a museum. Within this museum (or art gallery) is a particular gallery in which the piece is displayed; within this smaller space, there are different surfaces on which to showcase the art. The task of the curator is to exhibit artworks in such a way as to preserve the impact of each artwork; given that this is subjective, it may depend to some extent on the artist’s intention, if this is known. A curator knows that the viewer has no choice but to appreciate an artwork in the context of the other pieces that share its wall space and its gallery. For this reason, the surrounding works are integral to the viewer’s experience of each artwork. As well as the viewer’s experience, a curator should also consider dimensions of sensitivity (tact) and artistic sense (ensuring that a work’s surroundings do not impede the clarity of its impact on the viewer), crossed with wider socio-political concerns, or personal issues relating to an individual artist. 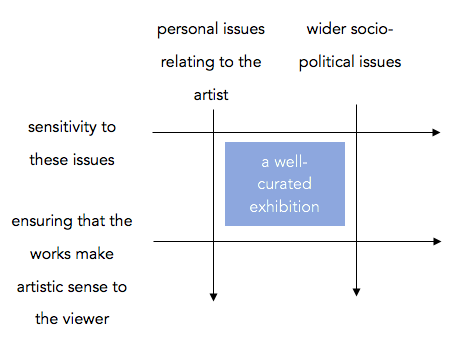 One might begin with the sensitivity that a curator must employ when thinking about an artist’s personal life. Consider Leonora Carrington, a Surrealist painter from the 1930s. Her work is and has been exhibited in the Tates of London and Liverpool: while her works in the London gallery are slotted neatly into a room themed around Surrealism, the Liverpool exhibition existed in the same building as the artwork of Max Ernst. Ernst was Carrington’s former lover, who left her in a state of nervous breakdown after fleeing the Nazis and leaving her behind. In a 2015 interview for the Tate, Joanna Moorhead (a journalist and a relative of Carrington) was asked whether Carrington would have “seen it as significant to share gallery space” with Ernst. Moorhead replied, “she would have said it was of no matter whether a gallery had Ernst’s work in as well as hers […] But Max learned things from Leonora as well: his art, especially through and in the aftermath of those years he shared with Leonora, is littered with references to what she gave him, to the difference she made to his life”. We can therefore decide that these two artists sharing space would not be an insult to Carrington’s memory, which removes that issue for the prospective curator of her work. It does, however, leave the minefield of minor decisions that make up the curator’s conscientiousness in ensuring that Ernst’s work does not patently overshadow Carrington’s, when their work shares space. For example, the curator might consider which room is closer to the entrance to the gallery or museum; in other words, which room will the viewer visit first? If the viewer sees Carrington’s work as soon as they enter the museum, then it will influence their perception of Ernst’s work when they see it later on, and vice versa. A further consideration is this: what if Ernst’s work is exhibited on a higher floor, or in brighter light? What does this mean, to literally elevate and illuminate the work of a man who drew so much inspiration from a key woman in his life, if her work were exhibited physically below his? This concern is especially significant when one considers the sublimation of women in the world of Surrealist art.

The curator…must balance the works’ collective effect with the impact and meaning of each individual piece.

The considerate curator might also consider wider socio-political concerns when allowing artworks to share space. In Vasco Araújo’s short film Portrait (2014), the figures in paintings and sculptures are given voices: thus, the relationship between paintings that share space is allegorised in the form of imagined dialogue. For example, some white figures painted in a colonial setting racially abuse the portrait of a black man: Araújo thus makes us reflect on the potential insensitivity of grouping certain artworks together. One might argue that grouping paintings in this perceivably insensitive way might illuminate the historical context of contemporary paintings, and thus increase their impact. However, this would of course morally contravene the responsibility of the curator, who should not appropriate one artist’s work to give new meaning to another; nor, conversely, should one build on an artwork with new meaning from another, as this would tarnish the original impact of the work.

In short, the curator of any exhibition that displays multiple artists’ work must balance the works’ collective effect with the impact and meaning of each individual piece, in order that both the exhibition and the pieces make artistic sense. On top of this, when the work of multiple artists is presented in one space, one must deal with the outstanding questions of sensitivity in relation to wider socio-political or personal context; this, too, is part of the task of the curator.