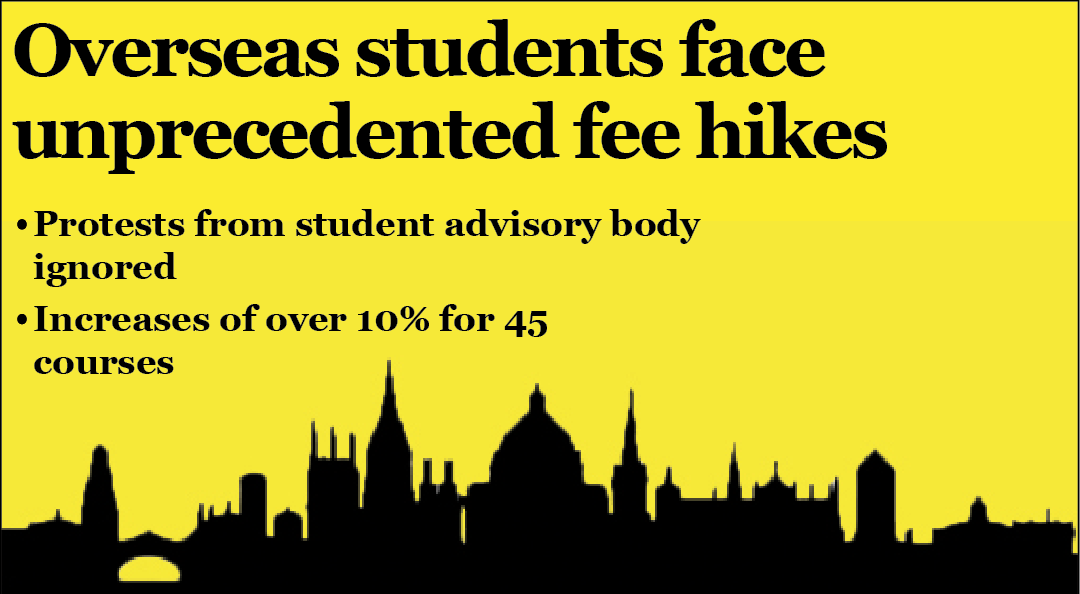 Fees for overseas students taking courses at Oxford are set to increase by 10.2% in the coming year (2019/2020) across more than 45 undergraduate courses, including PPE, Mathematics, Physics and History. The increase comes after the advice of a consultancy body consisting of University, college, and student nominees, which did not support the exceptional increase, was overruled. The sudden increase will only affect incoming students.

The consultancy body, the Joint Fees and Student Support Advisory Group, opposed the increases in a meeting on 5th June. However, the Chair of the group, Pro-Vice-Chancellor David Prout, attached a covering note to the proposal suggesting that the the 10% fee uplift increase be implemented nonetheless. The proposal was then sent to Planning & Resource Allocation Committee, of which Prout is also the Chair.

Lucas Bertholdi-Saad, the SU VP for Access and Academic Affairs, told The Oxford Student: “Oxford SU representatives sat on the Joint Fees and Student Support Advisory Group where this uplift was proposed on June 5th 2018. As the minutes of that meeting show, we strongly opposed this uplift, noting that there we want to attract the best students from around the world. That committee did not agree to the opt-out 10% uplift.

“After the meeting the Chair, David Prout, unilaterally overruled the committee and submitted an opt-out 10% uplift proposal to Planning & Resource Allocation Committee, where the SU President further opposed the uplift. This was escalated to University Council in 12th Week Trinity Term 2018, the first committee attended by this sabbatical team. We highlighted the risk to overseas recruitment and bursary levels, but Council approved the increase.”

The fee increase comes in light of the release of the government’s Augar report, which called for a reduction in the cost of degrees for domestic students, an extension of the length of the government loan, and the reintroduction of maintenance grants.

Similarly, Physics is set to charge £34,687 in total, an increase of 10.25% from the previous year, while a number of Mathematics undergraduate courses are also set to have overseas fee rises of 9.6%.

Those courses not affected by the increase, including Geography, Human Sciences, and Theology, will increase by 4%. This comes as the UK’s inflation rate has fallen to 1.8% for 2019.

While home and EU student course fees have been fairly stable over the last few years, due to government regulation of the fees that universities can charge domestic studens, overseas students’ course fees have steadily risen since 2014/2015 at an annual average of 3% to keep them in line with inflation rates.

The Public Affairs Directorate for the University said: “The University conducted a benchmarking review of fee levels last year, comparing our fees to those of key competitors such as Cambridge University, this resulted in some fees being increased by more than the standard level of inflation. These above inflation increases only apply to new entrants, continuing students are unaffected.

“Like all UK universities, Oxford charges two different rates of tuition fees for the vast majority of its undergraduate and graduate courses, the ‘Home’ rate charged to UK and EU nationals and the ‘Overseas’ rate charged to international students. The decision to class a student as Home or Overseas is determined by government legislation.

“Fees are set at a lower level for Home EU students since, broadly speaking, UK universities are able to access teaching and research funding from the UK government which is not available in respect of overseas students. In some cases the maximum fee chargeable to Home EU students is capped by the government.

“Fees for each course are reviewed on an annual basis by a group that consists of nominees of the University and colleges and student representatives, in consultation with academic divisions and the Department for Continuing Education. Factors taken into account include costs of provision of teaching, supervision and course-related facilities, fees for comparable courses elsewhere, and the level of government grant.”

“It is time to end the neglect of international students at the administrative level, and begin to see them as equals to home students, deserving the same respect and considerations. No one should be penalised for where they are born. The continued price discrimination against non-EU students does exactly that.”