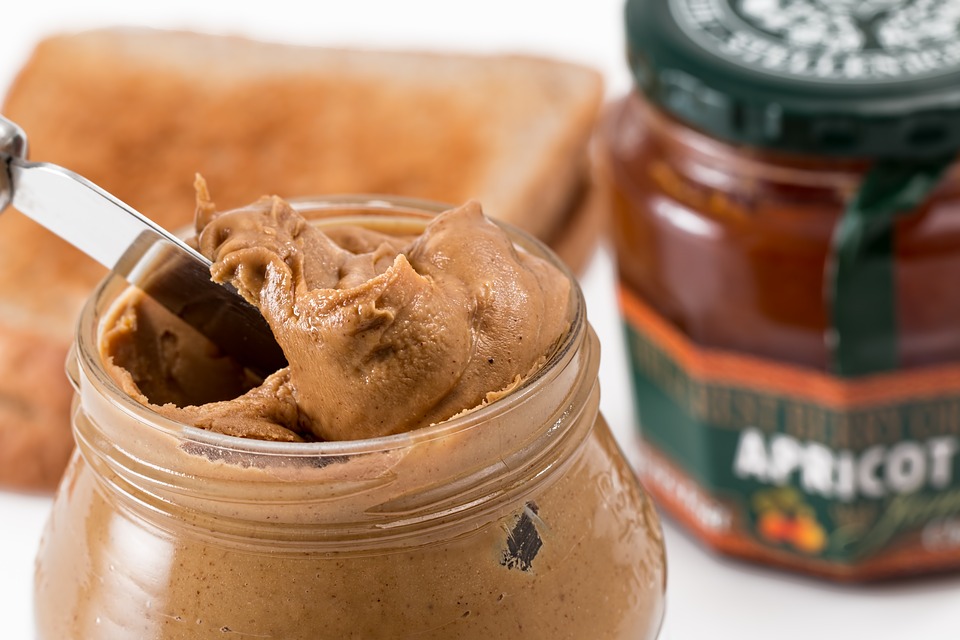 I, for one, did not grow up with peanut butter. It was jam, honey or marmalade on toast, with chocolate spread making a coveted appearance around Pancake Day. And yet in recent years, the claggy, golden, good stuff has cemented its place on UK supermarket and kitchen shelves – and our tongues to the roof of our mouthes, of course. With this in mind, I thought it apt to trace the backstory of the North American spread, from its leguminous advent across the Atlantic, right through to its new-found omnipresence on trendy British brunch tables. Apple slices and spoons at the ready…

Excavated Aztec pottery shaped like peanuts indicates that the nut (officially a pea-like legume) was well-known in the Americas of yesteryear. And more specifically, Native Americans from a similar period BC were partial to some primitive mortar and pestle action. Peanuts would be placed on the “nutting stone” and ground up with the “hammer stone”. Voilà, ancient nut butter. Spanish and Portuguese slave traders introduced the nuts to Europe, but the home of peanut butter innovation stayed put.

“I, for one, did not grow up with peanut butter”

Legend has it, among nut butter aficionados, that Cuban immigrants in New York inspired the earliest example of modern peanut butter manufacture. Allegedly, the Habaneros would slather a paste of the crushed nuts onto bread – but other hypotheses about the origins of modern peanut butter compete. A contender for the inventor’s trophy is Canadian Marcellus Edson. He patented a peanut candy in 1884 by squeezing the nuts through a heated mill to reach an almost-liquid consistency. Vying for the top spot too, is George Bayle from St. Louis, who formulated a high-protein peanut paste so that medical patients unable to chew could receive adequate nutrition. Bayle was advertising his butter as the ‘original’ by the 20s – but he could just have been suffering from an unfortunate case of fakenewsitis. And let us not forget vegan warrior of the Victorian age, John Kellogg. A proud defender of animal rights, this Seventh-Day Adventist would not be out of place unboxing a MyProtein haul on YouTube today. In a nutshell, we can’t be sure exactly who masterminded this plant product from the gods, so moving smoothly – or crunchily – on.

On a side nut, it is lamentable that Joseph Rosefield cannot get the recognition he deserves for another related brainwave: chocolate peanut butter. 1920s appetites, still strangers to the Snickers, evidently, could not get behind this ancestor of the Reese’s spread and so Hershey’s were able to swoop in decades later.

“On a side nut, it is lamentable that Joseph Rosefield cannot get the recognition he deserves for another related brainwave”

PB & J, though often baulked at by Brits (though I must admit I am a staunch proponent of this sandwich combo), saw the US Army through WWII and remains a go-to filling for millions of Americans. Its salvational role feeding those in combat echoes a similar peanut-to-the-rescue scenario from the late 1800s. Cotton plants suffered a disastrous weevil epidemic, leaving their growers with no alternutive but to divert their agricultural attentions to the peanut plant. It was a taste triumph.

Cheap and calorie-dense, peanut butter had trouble convincing us Brits that we were going about our bread spreads all wrong. Even the US saw sales dip as the dieting industry bedded down in the 80s and 90s. But André Briend, a French paediatric nutritionist, saw potential in this nuturally high-energy foodstuff. Peanut butter would come to save lives, yet again, in the form of vitamin-enriched ‘PlumpyNut’. Milk powder and sugar help to make the paste more efficient still at treating acute malnutrition. Meanwhile, victims of sexual abuse in Nairobi have come together to create the peanut butter brand ‘Queenz’, funded by the Wangu Kanja Foundation. Peanuts are, therefore – and there’s no denying it – both a force of nature and a force for good.

Even out of the context of adversity, we are wading through nut butter – thanks to the recent move towards more ‘healthful’ products. Big British brands like Whole Earth and Meridian tout their 100% nut varieties, while Pip & Nut aim to diversify your dark rye toast with their jars of Maple PB. In 2019, we are suckers for novel meets natural ingredients. The bougier your store cupboard, the cooler you are, with extra peanut points for proud possessors of Jackpot’s CBD PB: the dense and crunchy essence of the 21st-Century vegan hipster.