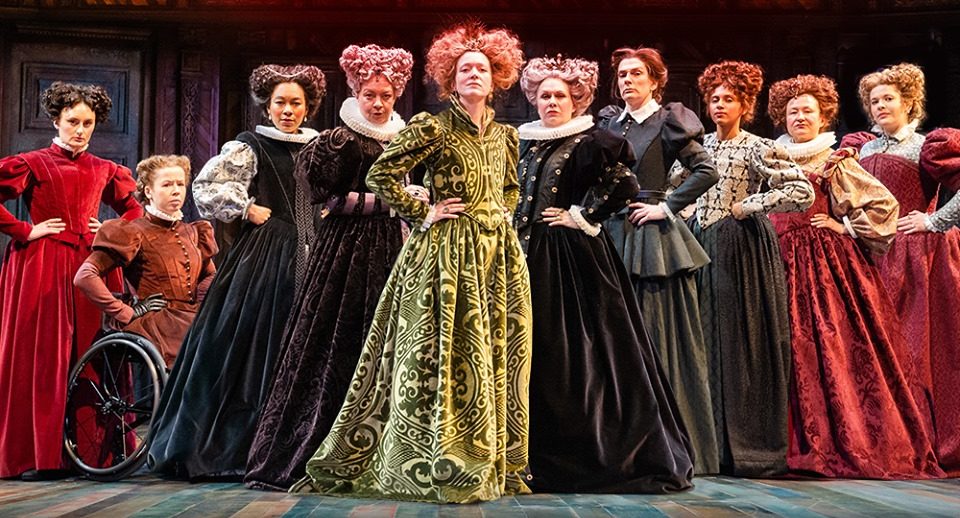 ​With classic literature like Shakespeare, it can be difficult to provide a new outlook that gives age-old plays new meaning. As seen in the 2010 film adaption of Macbeth, which is set in the Soviet Union, it is not uncommon for directors to take creative liberties in order to retell stories in unique and original interpretations. In watching the Royal Shakespeare Company’s production of Taming of the Shrew in Stratford-Upon-Avon, such a move was taken in order to contextualize the work with the current age and to create a world of matriarchal power and representation.

Set in the city of Padua, three suitors, Lucentia, Hortensia, and Gremia, played by Emily Johnstone, Amelia Donkor, and Sophie Stanton respectively, seek the hand of James Cooney’s Bianco, the youngest son of Baptista Minola, played by Amanda Harris. Before any arrangements can be made, however, Katherine, played by Joseph Arkley, Bianco’s older brother must first be married. Known as a shrew, this task is deemed impossible until the arrival of Petruchia, played by Claire Price, who attempts to tame the beast. Thus, begins the tale of deceit, courting, and the battle of the sexes.

In traditional renditions, the main cast consists of mostly men, with women being fawned over and subservient. Justin Audibert’s interpretation offers a twist in creating a world with women taking the reins of society. It provides an innovative change, validating the feelings of oppression that women have faced for centuries. “At the moment, there is an important conversation about gender and power,” Audibert said. “I wanted to see what it would feel like when the male voice is not the dominant one.”

By introducing this dialogue on stage, the conflict of dominance and obedience is brought into new light. The audience is made to feel pity for Katherine for the psychological abuse given by Petruchia in order to break his spirit out of love. While this is also present in the traditional rendition, the heartbreak in watching Arkley’s Katherine regress into unconditional obedience and the crazed portrayal Petruchia by Price, really drives the point home that this play is about abuse. It is jarring to realize that back in the days of Shakespeare, expecting this kind of complete obedience was the expectation of most women.

Despite the brilliant performance, there are still many points that could have been better executed. Katherine is portrayed less like a shrew and more like a man with anger issues. Many of his lines in the original play were left out, perhaps adding to his inability to voice his own opinions, but this equally takes away from why such drastic measures were taken against him in the first place. While the psychological abuse still cannot be justified, “Katherine the cursed” is not portrayed as abusive as he is in the original play.

Also missing from this rendition was the small induction at the beginning which sets the story up as a play-within-a-play. The Taming of the Shrew is a play being performed for a drunkard, which adds additional context to the story of Katherine. As a play, and assumedly a work of fiction, the abuse of Katherine can be seen as overexaggerated for the sake of storytelling which can ultimately change the interpretation of the play as a whole.

Additionally, not all transitions from male to female were as seamless as they could have been. In the final scene, Katherine’s speech only changes out pronouns, leading to interesting claims about women working out at sea while men stay home. Although strict to the original, the speech does lose some impact due to the out of place dialogue.
In addition to the inclusivity of women in a normally dominantly male cast, Audibert’s rendition brings attention to the inclusivity of people with disabilities. Lucentia’s servant, Biondella, played by Amy Trigg, has a wheelchair and Curtis, played by Charlotte Arrowsmith, who is a servant of Petruchia, is mute. In portraying these characters, Audibert’s creates a way for people with disabilities to see people like themselves on stage where their disability is normalized in modern society.

Overall, the Taming of the Shrew tackles current issues that have been debated and fought for centuries. While the themes of abuse, obedience, and dominance are present throughout the play, witty, and sometimes quite dirty, banter balances these negatives, creating a blend of humor, horror, and validation. The Royal Shakespeare Company offers a hilarious and provocative play that shows an interesting perspective not often seen in older literature and is definitely worth checking out.

“Truly an Everyman for everyone”?