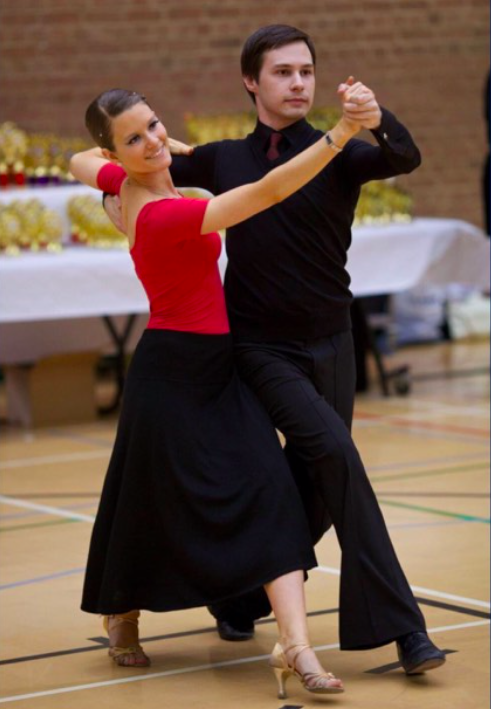 On 25th May at 13:00, Oxford University Dancesport Cuppers took place. This is quite a well-established competition with records going back to at least 1986. Dancesport is roughly defined as any kind of competitive partner dancing, with the two most popular categories being Ballroom (also known as Standard) and Latin.

Cuppers teams compete over four dances, the Waltz and Quickstep for Ballroom and the Cha Cha and Jive for Latin. This year, for the first time ever, there was also a separate event for Salsa, which was run in essentially the same way. To make the event as accessible as possible each couple only has to learn one dance, so each team (you can enter multiple teams per college) is made up of four couples, one for each dance. Another rule is that no two “experienced dancers” (mostly people who have recently competed on the university circuit or who have passed their gold medal exam) may dance together, thus ensuring that every couple has at least one beginner.

Teams are usually put together around the beginning of Trinity term. They then have a few weeks to learn and polish their routines as much as they can before the big day. As the club has two very large and successful teams, most colleges will have at least one trained dancer who can help with teaching people to dance and putting together routines (as well as competing on the team themselves).

I am now finishing my second year of competing for Oxford, having joined the university in 2017 with no knowledge of dancesport whatsoever. I spent a year training and competing with the beginners team before graduating onto the main team this year. As Jesus college team captain I was tasked with turning a group of largely inexperienced but highly enthusiastic students into a team of elite dancers (pro tip: Squash courts can make excellent impromptu dance studios). Fortunately there are quite a few other trained dancers at Jesus, which made my job much easier.

Training was going relatively well, people progressed at impressive speed from basic steps to full routines, with some dancers (read: me) possibly getting a little carried away with the complexity of their routines, forgetting that they were dancing with a total beginner. Still, it seemed to be working.

A slight hiccup occurred about a week before the competition when one of our Cha Cha dancers injured their foot and had to pull out. Fortunately I was at a dance class that same evening where I happened to run into one of the few trained dancers in Oxford who had not yet been poached for a cuppers team. As a non-jesus student he would score less points for our team, but half points is better than none.

Finally the day of cuppers arrived. The competition is divided into a number of rounds which lead up to a final. Every couple dances in the first round of their dance, with couples getting knocked out every round. Once the field is reduced to six couples, there is a final round (one for each dance)  where the couples are ranked first through sixth. Each couple scores points for the number of rounds they make with finalists earning bonus points depending on where they place. You even get a few points for just dancing in the first round, so the more couples your college can enter the better. Jesus did quite well, with three of our five couples making finals (and all placing second in their final) and the other two narrowly missing out and being knocked out in the semi-finals.

The atmosphere was electric with excitement and a small dash of nerves, especially considering the number of people experiencing competitive dancing for the first time. Fortunately, the crowd was very supportive, cheering and clapping all who went on, and it was clear that the dancers were all enjoying themselves.

The standard of dancing was impressively high, showcasing the dedication and enthusiasm that each team had managed to inspire. New college took home the trophies for best overall college as well as highest scoring single team. Jesus came a very respectable third and fourth in those categories respectively. The Salsa event was a little smaller than the Ballroom and Latin, but still well attended, and was won by Magdalen college (Jesus was sadly unable to find any Salsa dancers).

Overall it was a highly entertaining and rewarding experience, and I am quite sure that everyone who got involved was glad that they did so. Hopefully some of the participants will have “caught the bug” and will be turning up at team trials next year. Dancesport cuppers won’t be returning until Trinity 2020, but the Oxford University Dancesport Club runs taster sessions and classes every term, so keep an eye out if you’re interested.