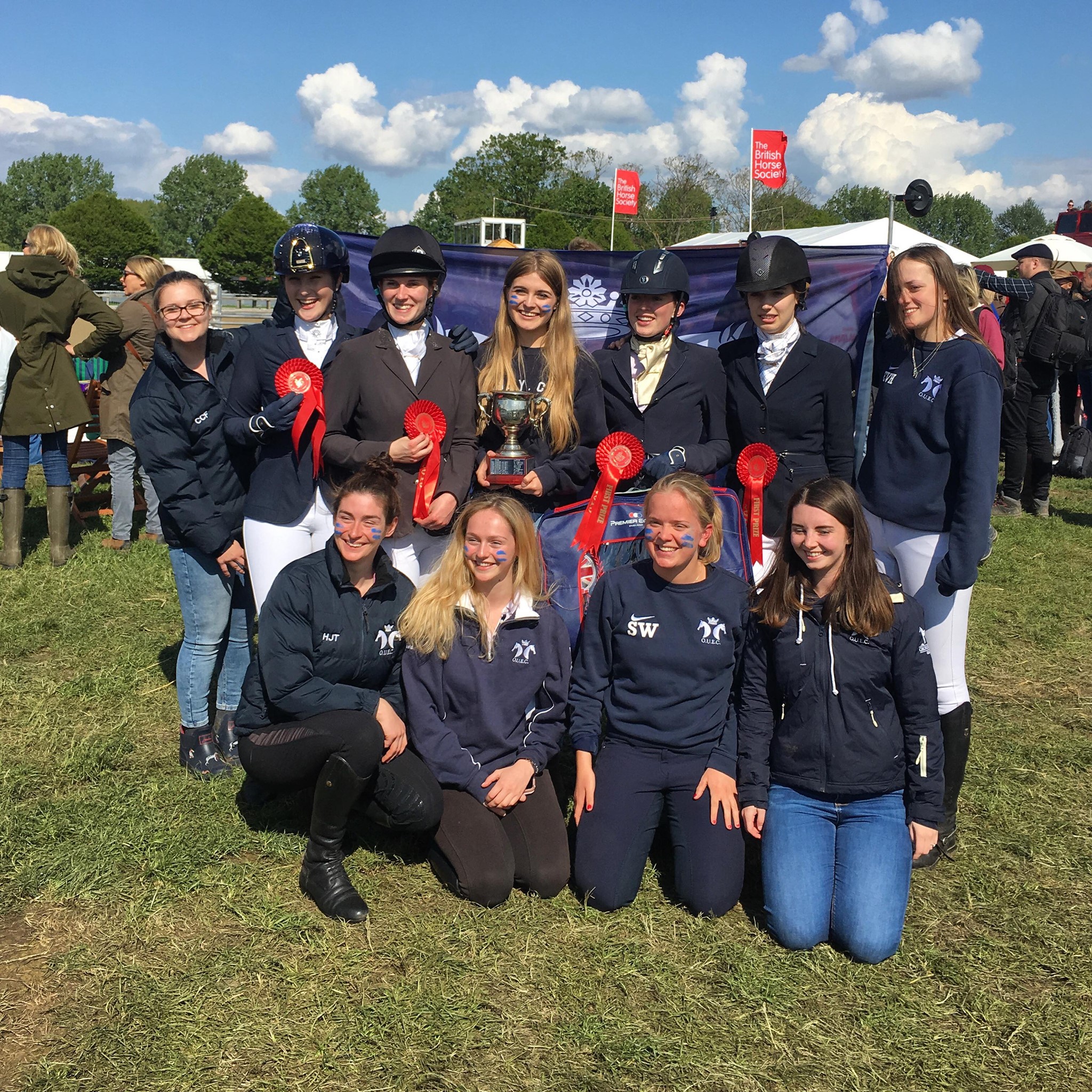 Unrivalled success for OUEC this season

This year’s season has been unrivalled in Oxford University Equestrian Club’s (OUEC) history. The squad, captained by Psychology finalist Amy Small, consists of three teams: two of these compete in BUCS leagues and all three in varsity. At trials in Michaelmas, the new intake of freshers was promising, with many of these talented riders joining the previous year’s team to form a highly competitive squad.

University equestrian sport consists of two phases: dressage and show-jumping. Each competitor in a team draws one of four horses and is judged in both disciplines, being compared fairly to their opposing counterparts who ride the same horse. Riders are judged on their style and how successfully they can ride a horse after having sat on it for only seven minutes. There are four BUCS preliminary rounds, each hosted by one of the four teams in the league, where each team competes for just a single spot at regionals.

The BUCS season kicked off with the Blues team, made up of Amy Small, Rebecca Bell, Olivia Bartlett, and Laura Bramall, winning their first match on home soil. This trend prevailed as Oxford again secured wins at Northampton and Oxford Brookes, and only narrowly lost to Cambridge at their hosted match. The 2s team were similarly victorious in three of their matches – home, Bath, and Cardiff – before placing a close 2ndat their final match at Oxford Brookes. These outstanding performances qualified both teams for their respective regionals where the 2s placed 3rd, just sixteen penalties from winning.

The Blues team preceded this by winning their Midlands regionals, earning them the all-important nationals qualification for the first time in the club’s history. Rebecca’s particularly exceptional performance enabled her to achieve individual first place.

Following BUCS regionals was varsity, a competition against Cambridge, which marks one of the highlights of the club’s calendar. Varsity takes on the same format as BUCS, but the level is increased, with the Blues team competing a medium level dressage test and jumping a course of 1.10m – no easy feat for horses they have never ridden before. The club has been fortunate enough to hold the Blues varsity at the prestigious Royal Windsor Horse Show for several years. This year, the Blues retained their trophy, beating Cambridge, and Rebecca again earned a well-deserved individual 1stplace. Following this, Amy’s incredible efforts led to the 2s and 3s varsity being held at Houghton International Horse Trials in Norfolk. Both teams rode tremendously well, with 2s rider Harriet Thomas being awarded individual 1stplace.

With OUEC’s outstanding season, it comes as no surprise that the club’s Blues status has been revised and upgraded. The Women’s Blues Committee voted through the new criteria in Hilary Term; to be awarded a full blue, the Blues team must be placed within the top two teams at regionals and compete at Blues varsity. With this new status in place, all four of the Blues team riders can now be awarded full blues for this season.

The success of the BUCS and varsity teams are not the only thing on which OUEC prides itself. With almost 100 members, the club supports students who want to begin riding for the first time, up to more experienced riders aiming to trial for our teams in the future. Cuppers is an excellent opportunity for all riders, regardless of their level, to show off what they have been working on throughout the year. It is also, for some, a chance to try riding for the first time, as the event is open to members and non-members. This year, on 22nd April, the weather held out as twenty riders went head-to-head for the chance to declare their college victorious. Excellent performances in both dressage and show-jumping from the Wadham-Worcester team, made up of Josie Ediss, Jasmine Knapman, and Beth Simcock, led to their triumph, with Josie also winning individually. 2nd team place was awarded to Magdalen-Exeter and 3rd to Lady Margaret Hall, whilst Carla Walla and Maria Costa picked up the 2nd and 3rd individual titles respectively.

Record-breaking qualifications, upgrading Blues status, and recruiting large numbers of members of all levels: it has been an exciting year for OUEC. The club takes delight in being a welcoming club, where all members can flourish and achieve their own goals, whether that may be competing for the Blues team, or relaxing outside of the ‘Oxford bubble’. OUEC looks forward to welcoming many new members next year. If you are interested in learning to ride at university, you can find further details of how to get involved on our website, Facebook page, or Instagram.