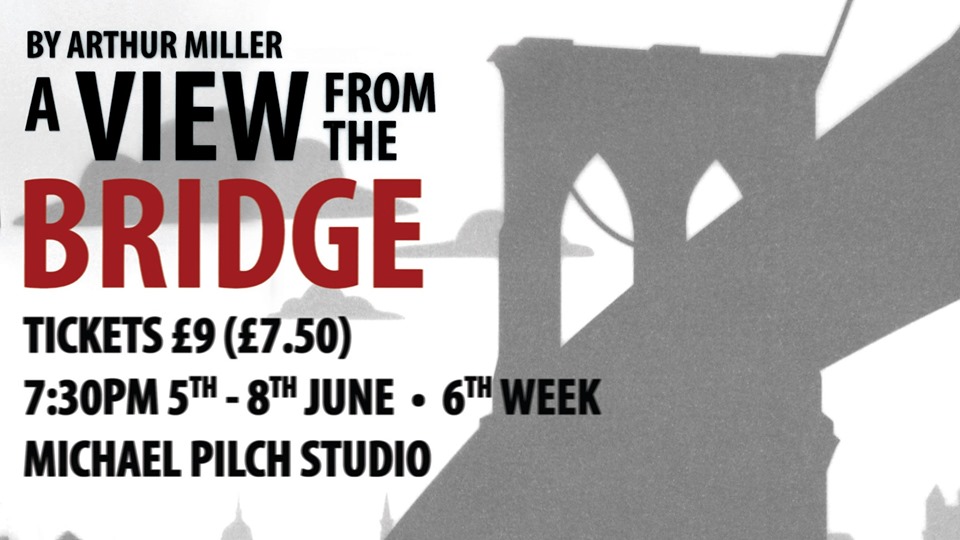 No doubt many of you, like myself, may be familiar with this play’s story already, having studied it endlessly for your GSCEs, A-Levels, or university course. Whether this was on the syllabuses of directors Joel Stanley and Joe Woodman’s educations or not, they and the rest of the cast and crew certainly have studied the play well and succeed in doing its script justice.

To briefly recap A View from the Bridge, a play by Arthur Miller, focuses on the 1950s Italian-American family of longshoreman Eddie Carbone (Caleb Barron) as they take in to their home his wife Beatrice’s (Martha Berkmann) illegally immigrated cousins. Following the arrival of Marco (Alexander Marks) and Rodolpho (James Akka) from Italy, Eddie struggles to see how his maturing niece Catherine (Philomena Wills) falls for Rodolpho.

This particular adaptation has stuck closely to the text and avoids any modernisation of the story with its set. The stage is dressed with a few old chairs and tables, some time-appropriate decorations like a record player, and pieces of fraying washing hanging from lines on the ceiling. In addition to this décor, the cast’s wardrobe and the warm lighting during most scenes makes the action appear to be occurring behind a suitably aged sepia tint.

The cast themselves were also excellently arranged on stage so as to best convey the underlying tensions of the story. Eddie has his own chair off to the side of the family’s dining table, and consistently during scenes he is placed on its side of the stage as the rest of the cast remain on the other, emphasising the growing distance he creates between himself and the rest of his family. During his betrayal of Marco and Rodolpho, it is on this side of the stage that he stands. When sat at the dining table he takes the middle chair, the same one which Rodolpho sits in for the rest of the play, neatly symbolising how Eddie views him as displacing his own relationship with Catherine.

It was disappointing then, considering the thought that went into the staging, that the thrust seating arrangement was not helpful to watching the play’s performance. Having sat stage right I found I was unable to see actors’ faces in many key scenes, and often cast members that were facing our side were blocked by others who weren’t, relegating the experience to more of a radio play than one of live action. Thankfully, through good use of movement and gesture issues such as these didn’t last so long as to become a serious annoyance. For certain, however, the best place to sit for this play is facing the back of the stage, from where I imagine less scenes were lost to sight.

Speaking of movement and gesture, especial recognition should be given to Philomena Wills’ use of stance in her portrayal of Catherine. Throughout the play we see Catherine grow from a bouncy and youthful young girl to a sturdier and more defensive young woman. Joe Stanton as the lawyer Alfieri also excellently conveys his level-headed position of authority over Eddie in their scenes using measured explanatory hand gestures, which he solemnly directs towards the audience as he narrates the story.

All actors take on accents for their roles to varying degrees of success, although there were no moments in which an accent was weak enough to damage the engagement of the audience with the play. Caleb Barron’s Eddie was the strongest attempt of the night, however there were times where I felt it created rather too much of a monotone delivery of some lines. Barron proved himself to be very capable of handling his character’s dramatic outbursts during the second half of the play, and so it was a shame not to see more variation in his earlier delivery.

Of course, this could have been a decision of the directors to have Eddie really hold back his anger and instead bubble under the surface for much of the play. This adaptation featured a good use of tension building music to add danger to already nail-biting moments of silence between the main characters, as long notes were stretched over time just as Eddie’s temper was pulled to breaking point. The clothes hanging overhead also combined skilfully with the lighting to cast looming shadows across the stage and faces of those performing.

I was less of a fan of the rather melodramatic choice to light the cast in red at the ending of the play, after Eddie’s death. Having seen and enjoyed the Old Vic’s 2014 adaptation of the play which ended with the whole cast bathed in blood, at first I thought I was being a tad hypocritical in taking a disliking to this similar if less messy staging. However, I feel that as the play had succeeded in being so realistic in its visuals up until this ending (unlike the Old Vic production which had featured a very modern staging), it might have remained realistic in its final scene, perhaps with the figures caught in grief and lit by a fading light, rather than a bright red (and somewhat artificial) one.

Nevertheless, with small matters like this put to one side, A View from the Bridge at the Michael Pilch Theatre showed an excellent understanding of its material – its staging is admirably done, even with a few missteps, and the character development was executed in a fundamentally convincing way. This play, despite having flaws, is well worth a watch for fans of Miller’s work, or those with an interest in beginning to explore it.