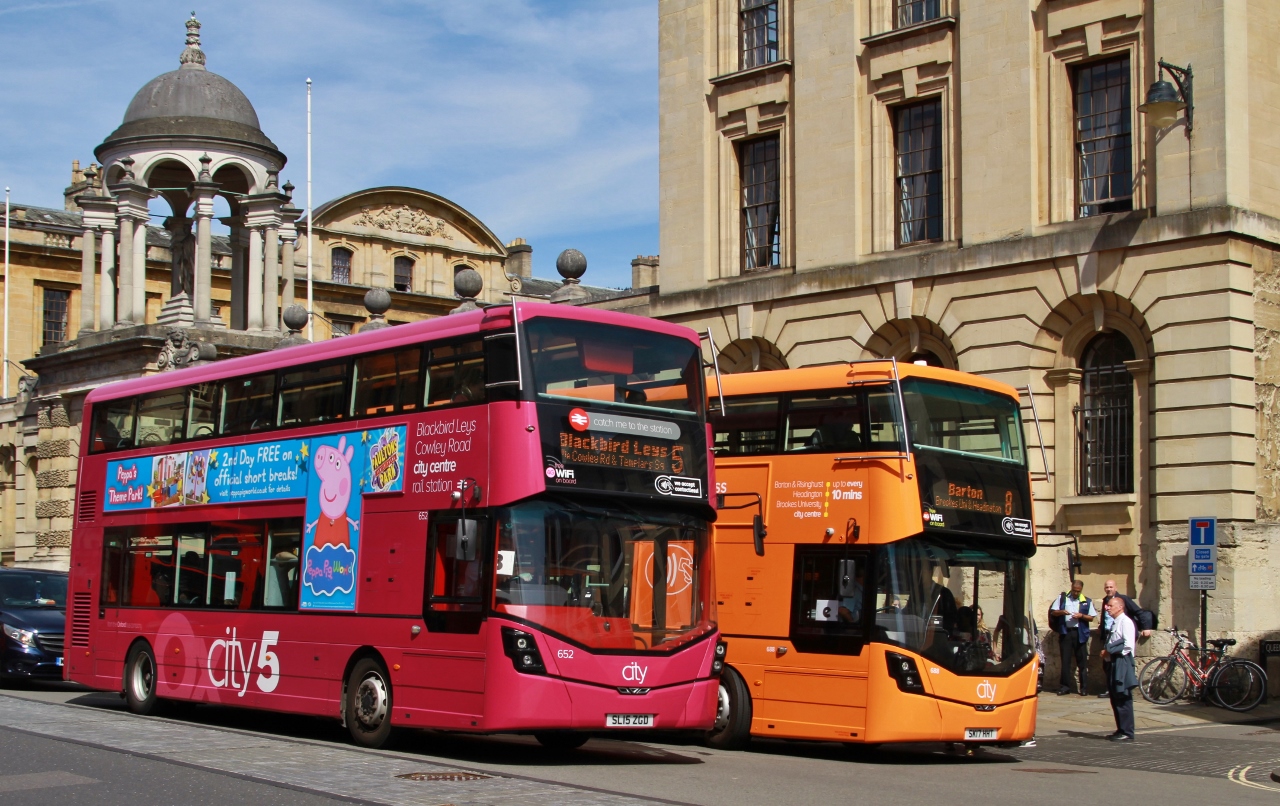 One day in the life of an Oxford bus-spotter

It’s been annoying me for some time how inconsistent the numbers are on buses in Oxfordshire.  I realise this doesn’t hugely matter.  But it does probably make journey planning confusing for people visiting the county, and we’re not exactly short of those.

Banbury Road, for instance, is an example of how it should work.  The 2 runs up Banbury Road to Kidlington. The 2A, 2B, 2C and 2D also go up that road to Kidlington, but take different routes around the village once they’re there.  Meanwhile, the 7, the 14 etc. all also go up Banbury Road, but take different routes and go to completely different places (Woodstock, the JR Hospital, etc.).  So a variant of a number suggests a minor change, and a different number a major one.  Right?

Not quite.  For instance, the 8 and 9 both go up Headington Road, and have an integrated timetable.  But at the far end, one turns right and the other turns left, to serve Barton and Risinghurst (which are adjoined to each other, albeit separated by the A40).

The 3 and the 3A (Iffley Road) are better.  The 3 goes to Rose Hill, the 3A diverges and goes to the Science Park. Unless it’s a Saturday, in which case it goes to the Kassam Stadium instead.  They could call that the 3B or something, but no.

But possibly the worst example of this are the 1 and the 5.  Both go from the station, through the city centre, and up Cowley Road to Blackbird Leys.  The difference?  Absolutely nothing.  They stop at all the same stops on all the same roads.  Like the 8 and the 9, they run to an integrated timetable.  (There is one difference between them, which is that the 1 is run by Stagecoach, and the 5 by the Oxford Bus Company.  Since some tickets are valid with one company but not the other, I concede this may be useful info. But that’s not consistent either.  The 8 and the 9—remember, substantially the same—are both run by both companies, which take it in turns. Same with the 3 and 3A.)

One thing that is consistent is that Park & Ride buses are numbered as multiples of 100.  There’s no 100 or 200, which doesn’t make much sense, but there are worse bus numbering sins.  The 500, though, may or may not go to Woodstock, in a fun bus lottery.

It’s been annoying me for some time how inconsistent the numbers are on buses in Oxfordshire.

Maybe if we get out of Oxford things will get more sensible, right?  I mean, the 35 goes to Kennington from Oxford, nice and simple, and the 35A also goes to Kennington.  From a school, which is not in Oxford.  They overlap for approximately the length of Kennington itself.

Alright, perhaps we have to go further.  How about a trip on the S3?  We can go on a nice ride to Chipping Norton.  Or maybe Charlbury.  Or maybe, if we’re really lucky, both!  Gosh, isn’t this exciting?   (On the map, these are all shown as a complex web of S3s; the only way to work out which ones take which route is to take a careful look at the timetable.)

Also I really appreciate knowing the names of roads like “Duns Tew Road” that go nowhere near any bloody buses.

Oh, and you know when I said the multiples of 100 were P&R buses?  If you go outside of Oxford itself, sorry, that’s a lie.  For instance, the 500 goes from Banbury to Brackley, in Northamptonshire.  This is not to be confused with the other 500, which is P&R, and which maybe goes to Woodstock.  Clear?

Now, without wishing go all “Four Yorkshireman”, this didn’t happen where I grew up (in, er, West Yorkshire).  I think that’s because there’s a Passenger Transport Executive coordinating everything.  Similarly, London’s bus numbers are (mostly) sensible, with one number per route. But here in a provincial county, the companies seem to be left to their own devices, which means not only no coordination, but to compile this I had to look at three different bus maps made by different companies, so you can’t even find out where you can get to. (For the record, Thames Travel, in South Oxfordshire, seems to have its shit together, mostly.)

One thing that is consistent is that Park & Ride buses are numbered as multiples of 100.

Here’s a bonus fact I discovered in the process of making this.  Ever wondered why the coach to London stops at Lewknor and people get on, despite the lack of any obvious settlement anywhere nearby? Well, I think I’ve solved the mystery.  Turns out you can get a bus there from Thame, which actually has people living in it, and then connect to a coach straight to London.