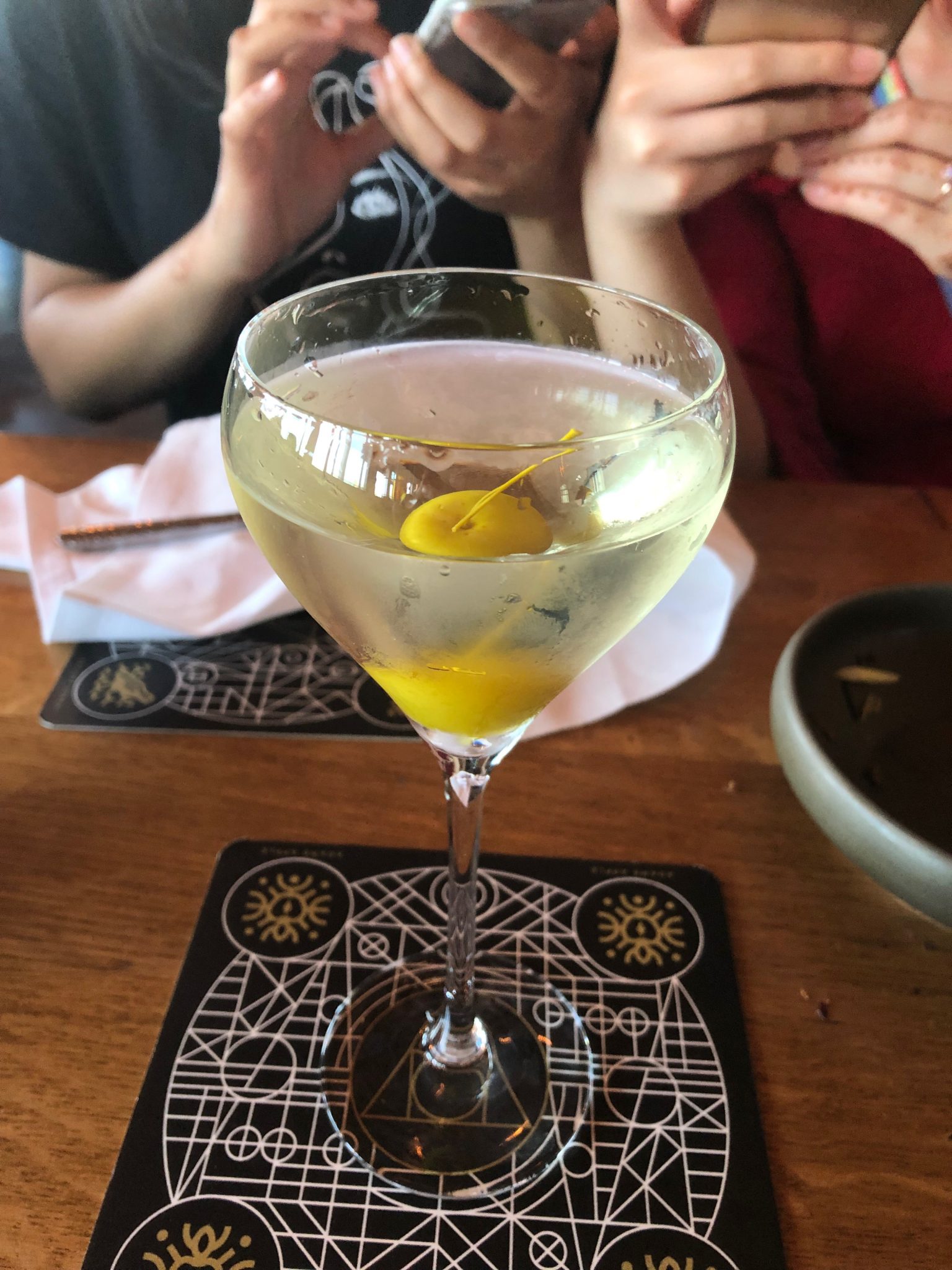 I’d heard a lot about the Alchemist before from friends and family. Most of the conversations consisted of praising the amazing view of the city from the bar, the stylish layout of the place and the unique nature of the drinks, but as someone who loves cocktails I needed to go myself.

I invited two friends to come help me review the place. People were not lying about the view – it felt like we were ten floors high, overlooking the whole city in a way that immediately made the bar feel more otherworldly and different from everyday life. I’m saying this right now – the staff were incredibly kind and attentive and the service was excellent (shout out to Joscel). I have to say that even if the food and drinks weren’t that great (which they really were, onto that next), the friendly atmosphere very much made the experience fun.

We decided to order four drinks and one dish. I had heard about the new Augmented Reality drinks menu and definitely wanted to try them, so I ordered a Sailor’s Punch and an Adam’s Apple (both Augmented Reality cocktails), a Dead Red Zombie and a Legal One as the regular drinks and one salt and pepper pulled pork as a starter. Saying this right now – the salt and pepper pulled pork was honestly so special. Wrapped in thin pancakes (the pancakes that are served with crispy aromatic duck), the pork was succulent and seasoned well and completely shone as a starter because of the cucumber sauce – I was literally speechless it was so yummy.

The stars of the show, the new Augmented Reality drinks, were also really quite awesome. They came on these Great Gatsby-esque coasters, with gold patterns that made the drinks more decadent than they already were. I was told to download the app ‘The Conjurer’, which was made by the Alchemist, and having done so was instructed to hover my camera over each drink. An entire digital story would unfold; I’d like to keep these as a surprise as the augmented reality aspect really is fun when this happens for the first time, but I will say that it elevates the entire experience – for a bar that focuses on delivering drinks in an alchemic and ethereal atmosphere, this very much suits the setting and increases the magic and excitement of the whole evening. Basically, as someone who has always loved fantasy, I really really liked it – the story that unfolds over video makes each drink seem more mysterious and significant. In addition, the drinks themselves were also beautifully presented. Sailor’s Punch contained a small bottle that looked like it had held a love letter and bobbed across the sea to shore. The rum was delicious and the whole drink felt like a ticket to an ancient beach with pirates and a lot of Cartier. The Adam’s Apple looked like a regular martini except with a small apple in the place of the usual green olive, which as a theology student made me geek out a bit. It was refreshingly sweet, like a Haribo without the headache, and really tasted sophisticated – I felt like I was lounging at a boudoir smoking a twenty year-old cigar from Alaska. In essence, I loved them both very much.

“It was refreshingly sweet, like a Haribo without the headache”

This was the same case for the Dead Red Zombie and the Legal One. Arriving in a cloud of mist wafting out of each glass, they honestly looked beautiful and almost scientific, like a nice version of conical flasks from every Chemistry lesson that haunted me through primary school. I don’t know how many other ways I can say something tasted good, so I will just try to emphasize that they were delicious and fun.

I understand that this review seems like a thousand rays of positivity. I’m not kidding – it was a fantastic experience all around. With good service, food and drinks, the Alchemist struck me to be a great destination, and I’m eager to see what they’ll do in the future.