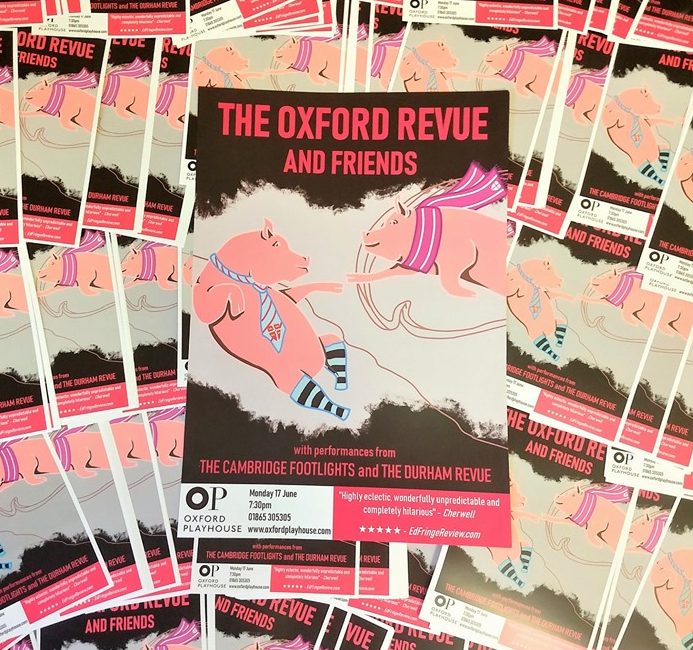 It was a Saturday morning when I found myself sat waiting to preview The Oxford Revue’s Playhouse show playing on Monday 17th June. As I sat waiting for a fellow reviewer, I was told I would be privy to seeing a few sketches from the show. As I waited, all the comics were sat around exchanging stories, rife with accents, jokes and laughter. Their chemistry was evident as they riffed and added to each other’s sketches with friendship and camaraderie in abundance. They had me laughing before they had even started the preview. If the show was anything like their casual badinage, I was in for a treat…

The show, playing at the Oxford Playhouse on Monday 17th June, will be made up of two halves. Performances from the Cambridge Revue and Durham Revue make up the first half, with the Oxford Revue taking the second half. President of the Revue Katie Sayer explains, ‘we’ve toured in theatres in Cambridge and Durham, so it’s their turn to come here. Each troupe has a distinct performance style, so it’s fun to see us all perform together.’

The Oxford Revue style of sketch-comedy is not only hilarious but allows the performance to be slick and move at a fast pace, meaning you have hardly recovered from laughing from one sketch before the next starts and you are being thrown off in a different direction.

See the finest comedians Oxford has to offer before their Edinburgh Fringe run, and dare I say it, their inevitable fame

Another performer Tommy jokes ‘each sketch is only about 2 or 3 minutes long, some even shorter. It allows us to try out some riskier stuff as we can go through sketches quite quickly’.

The performance itself promises to be rife with humorous and ‘risky’ sketches. The nature of the Playhouse show means that the troupe are catering to hundreds of individuals unique senses of humour, both students and Playhouse trustees alike. The sketches vary from the political to the downright farcical providing giggles and guffaws for all ages who intend to see it.

Most of the comics come from an acting background, inviting theatricality into the sketches, with the predominantly female troupe bending the rules of the stage through using multimedia and tech to vamp up student comedy.

If you want to see a Cardinal called ‘Sin’, a Communist Dog and a retelling of Goldilocks and the Three Bears from peculiar perspectives, book your tickets to The Oxford Revue and Friends now, and see the finest comedians Oxford has to offer before their Edinburgh Fringe run, and dare I say it, their inevitable fame.

Review: The Freedom of the City, Oxford Union