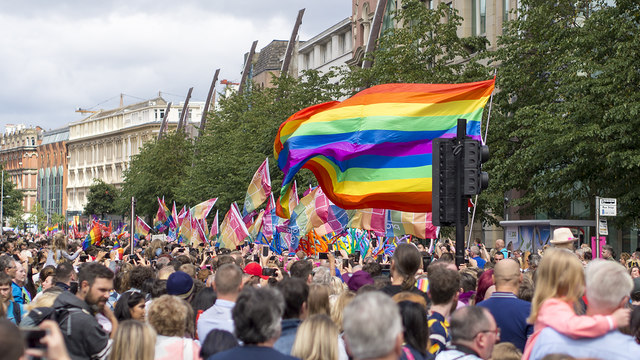 Is pride welcoming to the whole community?

Oxford Pride this year was the first Pride I ever attended; I’ve been firmly in the closet around my family for a variety of reasons, and couldn’t take time to go to my local parade without them knowing exactly what I was doing. So, for me, attending Pride this year felt like it was going to be something special.

It always seems, to me, as if attending a Pride parade is a day full of joy, excitement, and connecting with strangers over a shared experience. Maybe there’s a bit of sunburn included in that, but all in all I’d describe it as a good day to be had by all.

Considering I started off with this description, it probably comes as no surprise that there’s a ‘but’ to this. And there is. Because Pride did not in any way live up to the joyful event I expected it to be.

I arrived half an hour early to get ready to march in the parade. It was hot, there were people everywhere, and I felt distinctly put on the spot by people shouting about what they were selling, not to mention those poor tourists who were not expecting to have their view of the Rad Cam blocked by a gaggle of gays (I couldn’t help but worry if they were passing judgement on me, especially when it came to the elderly British tour group).

Marching in the parade with my friends was – well, it was marching. I couldn’t turn around to see everyone behind me or I would run into someone else in the tightly packed parade, and I couldn’t see the banners of all those in front of me. I lost the friends from home who were also at the parade within minutes of seeing them, and continually had to reorient to find various members of my group so we weren’t separated. It wasn’t exactly what I expected.

What’s the point in a community stage which doesn’t accommodate the whole LGBTQ+ community?

We cut out of the parade to arrive at the Castle before it got busy, yet the tiny space filled up unbelievably quickly, and it felt like there was no space to stop. In my group, there were six of us, and we’re gays, so naturally it was nigh on impossible for us to maintain any kind of coherence in the crowds. Most of us left without speaking to more than a single stallholder, and our plans to sit on the grass by the stage were effectively halted by how piercingly loud the music was.

The situation was identical at the community stage in the Westgate, and I was left thinking: what’s the point in a community stage which doesn’t accommodate the whole LGBTQ+ community?

Pride, alongside being a celebration, is meant to raise up marginalised voices so everyone can share in the gains the LGBTQ+ community has gradually made. Yet there was nowhere my group of friends at Pride could go in the official space that was accessible. Out of the group of six of us, a majority are autistic, and the blaring music made it impossible to have a conversation, let alone enjoy ourselves.

My experience was definitely not everyone’s; I met a lot of people who had a ton of fun at Pride. But that doesn’t stop me from wondering what kind of fun I could have had, the people I could have met, had the space been a little more accessible. The day was still great, once I left the event itself and had a picnic with my friends, but I wish I’d been able to enjoy the official Pride events as an autistic person and that Pride will continue to develop into a more welcoming space for all.