Gatsby at Trinity follows F. Scott Fitzgerald’s mystery man Jay Gatsby before he was a mystery. We watch as he enrols as a student at Trinity College, Oxford, in 1919, after serving in the Great War. The play is adapted by the book of the same name by Ian Flintoff, who studied Modern Languages himself at Trinity, wrote the book of the same name. Where better, then, to stage this original play than on the lawns of Trinity with the glow of a mid-June sun to accompany the laid-back timelessness which the actors bring us?

An older, now ‘Great’, Gatsby, played with the right combination of charisma and introspection by Kevin Hurlbutt, accompanies the audience as they watch the younger Gatsby (Alec Watson), fresh from the War in army attire, find his way to Oxford from Manhattan. At first sight Watson and Hurlbutt have too little resemblance to be playing the same person — but soon enough we find this in fact benefits the structure of the drama: the young Gatsby is yet to be comfortable in his own skin, and Watson communicates this well with slightly clipped movements, while Hurlbutt declares himself by being the one character to command the space.

Where better, then, to stage this original play than on the lawns of Trinity with the glow of a mid-June sun to accompany the laid-back timelessness which the actors bring us?

As with Fitzgerald’s novel, Gatsby’s primary preoccupation is his distant love Daisy. Watson and Hurlbutt do well to communicate that Daisy is constantly existing in Gatsby’s mind, in whatever situation he finds himself: the consistent transformation of poetry (of all kinds) by Gatsby to include Daisy was a particularly appealing part of the script.

Watson and Hurlbutt are accompanied by a charming if not constantly engaging ensemble. Highlights included: Dan Hall as Dean Higham, eyeing Watson with a momentary maniacal flash of the eye as he sets him an essay on Virgil’s Eclogues IV; Leanne Yau as Madge, unravelled from her first appearance as glamorous (and talented, I might add) singer who is later self-described as a ‘blue stocking’ with a soft spot for Kant; Marianne James bringing the cool intelligent charm as President Blakiston; Reya Muller generating consistent laughs as the scout ‘Cadders’.

The pacing of the conversations felt at times misjudged: the actors could have done with some tighter direction for delivery and for the use of space. All the same, a good backdrop for Gatsby’s self-discovery was provided. Mention must be made of Liam Gesoff, whose smooth piano playing was the key to the romanticisation of Gatsby’s experience at Oxford.

The actors do very well to communicate that we have only just emerged from a war with countless casualties. Blakiston (James) makes the most use of the snippets from the script that weave references to the sorrow caused by the War in conversation with Gatsby. These moments provide a break from the humour of the displaced American in an English town, which wears thin after the first half. Indeed, the play may be too long for its own good: it is difficult for the actors to keep the audience’s attention  if the script restricts them to static exchanges.

But the poetry of the play’s ideas ends up staying in the mind after viewing. It is not easy to pull off a piece that interjects lines of Virgil, Cicero and Sassoon, but Watson has a convincing way of personalising what he reads or listens to — and in doing so invites the audience to do the same.

Gatsby at Trinity is well-suited to be a garden play: the bright sun on the lawns of Trinity is an experience we can share with Oxford undergraduates from a hundred years ago, and the actors bask in it as much as we do. While the production could have done with a smoother pace and a more confident voice, the laid-back energy the ensemble cast provided was a well-judged backdrop for Gatsby’s maturation into the charismatic man that Hurlbutt gives the right energy to.

POSH is a riot! 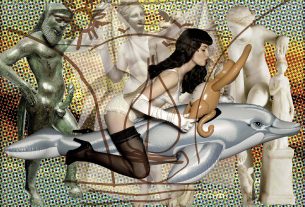 Review of Jeff Koons at the Ashmolean: Sentiment and sexy stainless steel