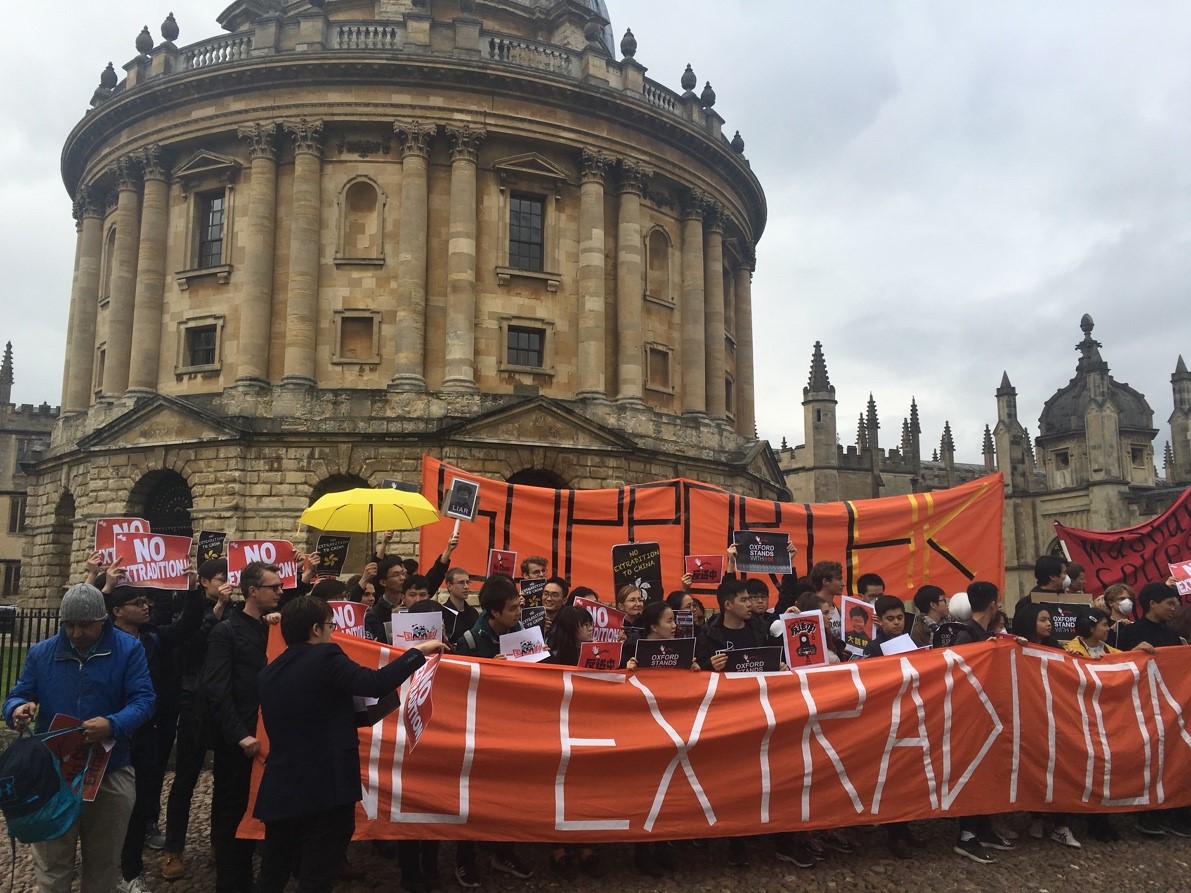 Oxford University students and staff, many having connections with Hong Kong, gathered outside the Radcliffe Camera on Thursday evening in a silent protest against the recent political turmoil in the special administrative region, particularly the passage of the Extradition Law Amendment Bill and the ensuing protests.

After convening outside the front entrance of the Radcliffe Camera, the protestors formed a circle around the front side of the building, sitting silently, in solidarity with fellow students involved in the protests taking place in Hong Kong.

Those who had come to demonstrate were first addressed by one of the organisers, who appealed to “the Hong Kong spirit” and reminded protestors of the struggle faced by their friends and family in Hong Kong. “I know that lots of people feel we are very far away from home,” she said, “and it’s very kind of futile and hopeless and you feel sad that you can’t really get involved. But, as long as we are trying our best, our friends in Hong Kong will also thank us. So don’t feel hopeless and don’t feel sad for not being there with them. We are there with them.”

Since being handed over to China by the British in 1997, Hong Kong has seen a gradual decline in political freedom and its democratic system have faced increased interference from Beijing and the mainland government.

A recent amendment to Hong Kong extradition laws now makes it possible for suspects to be extradited to mainland China, which is thought to be a serious threat to Hong Kong’s autonomy promised in the joint Sino-British declaration. An undergraduate student at Trinity College and one of the organisers of the protest explained that “the extradition act allows Hong Kong to extradite criminals back to China. The problem with that is that the mainland doesn’t prosecute criminals based on their real offences…

“It is difficult for us to uphold our freedom of speech and our rights.”

While Hong Kong is a part of China, they have vastly different judicial systems. A pamphlet produced by the organisers of the protest explains that “Unlike China, Hong Kong has independent courts free from political influence and persecution. Hong Kong also provides genuine legal protection to human rights”

Those protesting expressed serious concern regarding the fairness of the PRC’s judicial system. As a result of this amendment, the safeguards currently enjoyed by suspects facing extradition will be taken away. It is now possible for cases to be raised by the Peoples’ Republic of China, which was previously not the case. The Hong Kong legislative council no longer agrees to extradite on a case by case basis. The Hong Kong courts are now simply required to confirm that the case is not one of political persecution.  The Bill also legislates that the Chief Executive now authorises all requests for extradition and holds final consent on the matter. Protestors have pointed out that the current Chief executive, Carrie Lam, was elected by a 1200 person committee controlled mostly by Beijing.

One protestor said: “Once the bill is passed and the floodgates opened, how will the Chief Executive be able to defy the wills of the central government?”

Alongside the nature of the bill itself, citizens of Hong Kong as well as the Hong Kong diaspora have been outraged by the way in which authorities dealt with the ensuing protests that took place in the city following the announcement of the bill. Earlier this week, 1,030,000 citizens marched to call for the bill’s withdrawal, but the government did not waver. Eventually, the meeting on the bill was postponed but the Hong Kong police has been described as using “excessive and disproportionate violence agains the peaceful protestors” resulting in 79 protestors being injured by batons, tear gas and rubber bullets.

Another protestor expressed deep regret for the injuries caused by the manner in which the police handled the peaceful protest. To remain in solidarity with fellow students and protestors in Hong Kong in the middle of undergraduate exam season, he stated that “We are trying to launch a “no trashing for Hong Kong solidarity campaign”. The idea is that when we see our fellow Hong Kong citizens being shot with rubber bullets, there is no reason for us to be trashed and sprayed with champagne”.