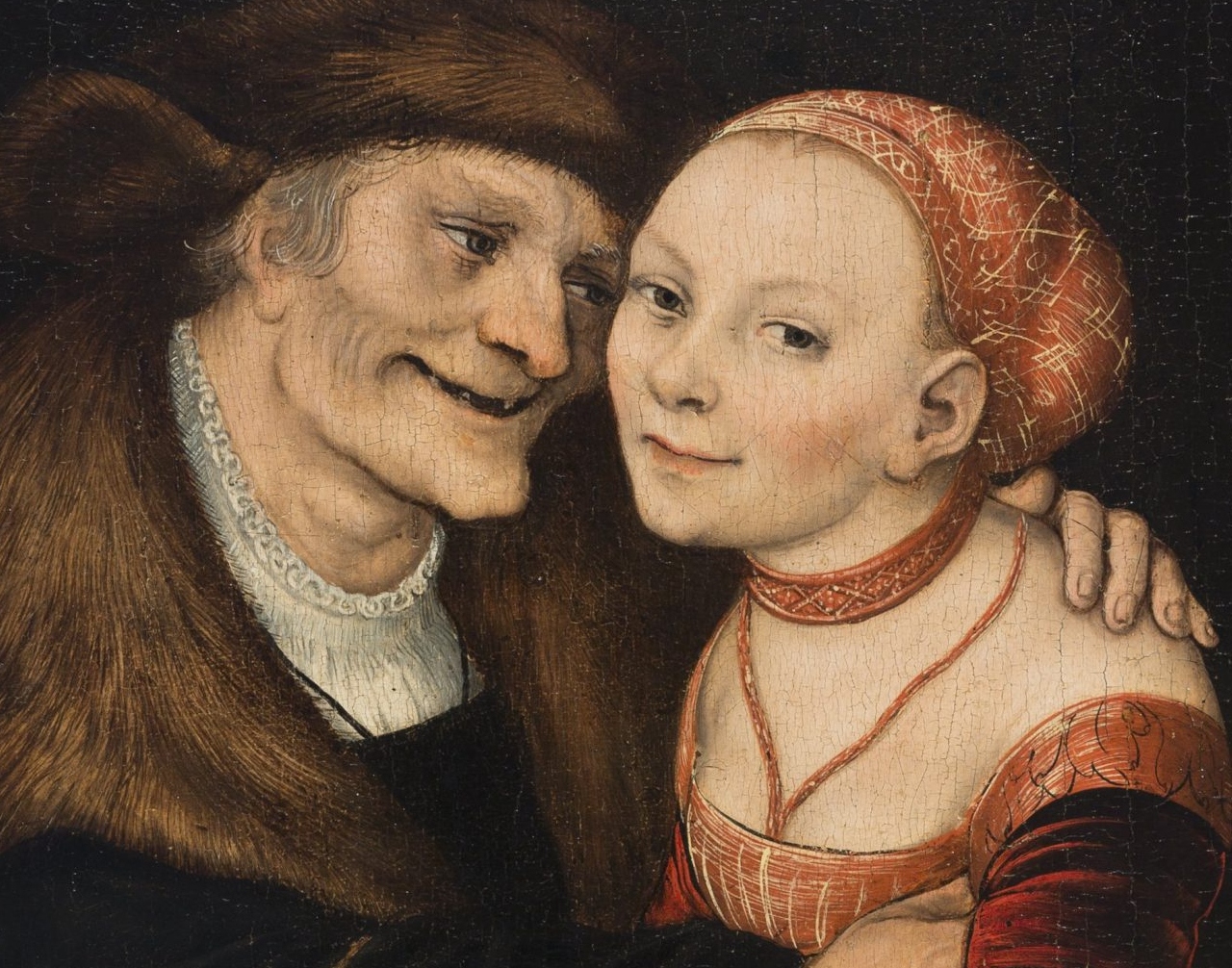 Throughout history, it seems that certain human behaviours remain steadfast, regardless of the extraordinary societal developments which have occurred over the past centuries; practices which we might view as a modern revelation are often far from it, as humans are, despite our sophistication, often driven by fundamental desires and behaviours (some of the most basic examples of which are related to sexual relationships).

The visual arts, like literature, are able to enlighten these human behaviours – and the ways in which they change over time: this can be seen with the ‘Ill-Matched Couple’, a trope which became popular during the Lutheran reformation, which depicts subjects different in age and vitality, whose disingenuous relationships are founded in the commodification of sex – i.e., the exchange of money in return for sexual favours. While a number of artists focussed on the trope, including Leonardo da Vinci, Albrecht Dürer and Quentin Matsys, it was Lucas Cranach the Elder (born in Germany in 1472) who dedicated a number of his paintings to this peculiar social focus.

One specific example of an ‘Ill-Matched Couple’ can be seen with Cranach’s 1517 painting, currently held by the National Art Museum of Catalonia; the scene is undoubtedly a moralistic comment – unlike the primarily aesthetic emphasis of modern visual arts, artists like Cranach were just as concerned with the implicit meaning of their paintings as well as their visual qualities. The painting depicts a lecherous old man with sallow skin, missing teeth and thinning grey hair, his arms wrapped greedily around a young woman’s breast and shoulder. Gazing longingly into her eyes, he is ignorant of the fact that she, on the other hand, fingers his purse while smiling knowingly at the viewer. Foolishly ignorant on account of his lust, the old man falls victim to the girl’s youthful charm.

There is a somewhat uncomfortable presence when looking at the painting; on the left, the man roughly clasps the woman; on the right, the woman is cunningly thieving from him. However, it is the man’s behaviour which is especially disagreeable: his large furs denote his animalistic desires and, coupled with his predatory grasp on the young woman, he is somewhat bear-like – the woman is implied to be his prey. At the same time, however, the woman is able to match his authority not through a deft physical grip, but with the mere slip of a hand into his purse. Her direct gaze and pleased grin is particularly empowering: this distinctly intimate connection almost makes the viewer an involuntary conspirator in her efforts to rob the old man.

The woman is able to match his authority not through a deft physical grip, but with the mere slip of a hand into his purse.

Unsurprisingly, given the word ‘couple’ in the title of the painting, there is a significant physical connection between the pair, created by a striking visual technique: within the bottom half of the canvas, the couple’s arms run parallel to each other at around 10°, illustrating some form of binding physical attachment. In creating this connection, Cranach subconsciously conveys the idea that they are locked together within a relationship which relies on mutual reward: one’s eye is guided towards what is at the end of either hand – he is touching her breast, whereas she is fondling his purse (a perfect visual representation of the transaction which defines their relationship).

Despite having been painted half a century ago, therefore, this painting is more relevant to contemporary society than it might initially seem: to a modern audience, transactional relationships are not at all unfamiliar – almost everyone is aware of the familiar concept of ‘sugar babies’. Sugar babies and Renaissance paintings might not seem like the most natural partnership, but when thinking about their areas of comparison, one can understand the ways in which some human behaviours remain surprisingly unchanged by the passing of time. Despite the fact that the practice of sugar babies is a well-organised and increasingly popular one nowadays, in its fundamental nature, it is not dissimilar to the relationship of mutual reward which is depicted in Cranach’s depictions on the subject.

In the past two decades, with the tremendous growth of technology, the number of practicing sugar babies has significantly increased – websites such as Seeking Arrangement (which connects sugar babies to ‘sugar daddies’ and ‘sugar mommas’) boasts an active membership of 10 million users. Media sources contribute to this rising interest, regularly spewing out a torrent of sensationalised literature on the subject: ‘Dating website founder, 31, reveals the qualities sugar daddies are really looking for in their ‘babies”; ”Sugar baby’ earning £33k a year dating older men reveals ‘outrageous’ lifestyle but says “it’s not prostitution”‘ (according to The Daily Mail and The Sun). Engagement can even be seen on platforms such as YouTube, with (admittedly controversial) characters such as Trisha Paytas uploading videos on her personal experience as a sugar baby to her almost 5 million subscribers (helped, of course, by a provocative thumbnail and title). While these forms might be ‘low-brow’, they nonetheless indicate the extent to which there is a genuine public interest in the subject.

Sugar babies and Renaissance paintings might not seem like the most natural partnership, but when thinking about their areas of comparison, one can understand the ways in which human behaviour remain surprisingly unchanged by the passing of time.

Despite the current social climate, these modern forms of transactional relationships did not suddenly appear at the end of the 20th-century: humankind has been concerned with the ‘transaction’ within sexual relationships throughout history: just look to Chaucer’s The Wife of Bath’s Prologue or Falstaff’s courting of Mistresses Ford and Page in The Merry Wives of Windsor. In fact, it would seem that this behaviour has a fundamental biological basis: in 2005, scientists at Yale New Haven Hospital conducted an experiment whereby they gave Capuchin monkeys silver discs in order to observe their economic behaviour (the discs could be traded-in for grapes); they noticed that the male monkeys used the discs as a form of payment in sexual transactions with the females, who subsequently traded their earnings for the grapes.

While I won’t attempt to analyse the complex psychology which motivates this behaviour, it is evident that there is a certain innateness in the concept of sexual relationships (not all relationships, of course) as being transactional: if monkeys can engage in a form of quasi-prostitution, then it is more than probable that the human concept of transactional relationships has existed for centuries.

However, despite this historical consideration, with the practice’s rising popularity within society, the moral dilemmas surrounding sugar baby relationships have become increased, raising an important debate on feminism: although the existence of sugar babies is persistently condemned as being ‘anti-feminist’, surely a woman’s right to control her own body is necessarily empowering? Historically, it is undoubtedly true that women’s forced reliance on their bodies for survival was a terrible thing, as they had little choice but to do so – however, if a woman living in the 21st-century independently makes an informed and genuine choice to join the lucrative market of sugar babies, is this freedom to gain independence and autonomy not entirely feminist?

With this in mind, I return to Cranach’s 1517 painting and ask: if both the man and the woman are mutually benefitting from the relationship, then are they truly as ‘ill-matched’ as the title might suggest? If the man is unaware of her taking money from his purse, the woman’s action seems somewhat dubious. However, because their entanglement consists of an exchange which benefits both parties (and they seem consensual), then surely it is a well-fitting match?

Whereas Cranach’s 16th-century audience were encouraged to resent the woman for exploiting the man’s lust, a modern viewer might interpret the painting as representing a woman’s autonomy through her involvement in an advantageous relationship.

Despite the fact that society’s beliefs systems are continually evolving, basic biological instincts are seemingly timeless – their foundation is rooted in the innate subconscious. Therefore, examining the different historical interpretations of a piece of art allows one to measure the changing attitudes towards women and their role within society and relationships over a prolonged period of time.

In comparison to the 16th-century, women are no longer scorned for their involvement in transactional relationships and are, in fact, spurred on by an increasingly curious media and public interest which mystifies the world of sugar babies. Although held to be reductive by some, the benefits afforded to those who willingly partake offers them a luxurious and comfortable lifestyle – which appears to be an ideal sought out by individuals throughout history.

Marley: Worth a few bob