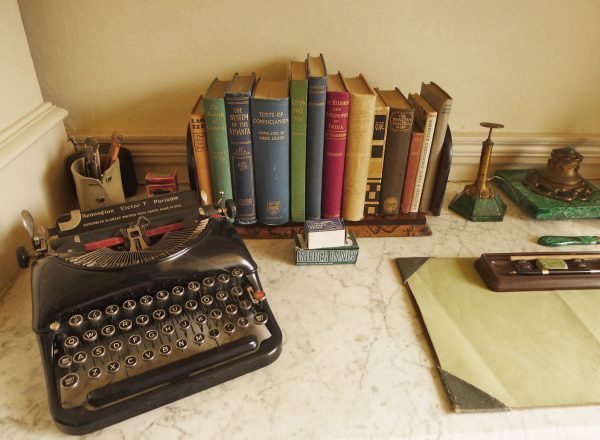 Almost anybody would be able to call to mind a number of famous titles from the canon: Jane Eyre, War and Peace, To Kill a Mockingbird, etc., etc. … Because of our acquaintance with these famous works, most people are desensitised to the titles themselves. When one actually considers their purpose, the titles of books are peculiar things. On the one hand, they are purely practical: they represent the text within a book, shaping the words into one whole entity: they allow a book to be easily recognised or discussed, for in a few words, familiar titles can immediately conjure up the associated story. However, there are various complexities associated with titles: for example, should a title be a faithful representation of a novel? Is it allowed to be misleading?

An author’s inspiration can often be inferred from the titles of their novels, which are very carefully conceived – as they create the reader’s first impression of what the writer seeks to convey. Taking the example of Jane Eyre, this title allows the reader to instantaneously determine certain facts: one can assume that the protagonist is named Jane Eyre; hence, we know that the protagonist is female. The use of the name ‘Jane’ in the title informs a number of details, which might even include the protagonist’s social class, ethnic background, etc. While this fact might seem blatantly clear, working through the phases of subconscious prejudgement allows one to understand the importance of titles as representatives of a novel. Consider, for example, Brontë’s novel being entitled ‘Jane’: the lack of specificity as a result of the absent surname instantaneously results in a far more personal tone; this alternative reads almost as a romantic musing of a loved one.

When one actually considers their purpose, the titles of books are peculiar things.

Arguably, the most stimulating novel titles are those which are, in fact, allusions to other works of literature; to the knowing reader, allusions are a way for an author to immediately evoke the suggested text, encouraging the reader to approach their reading with this alluded text in mind (meaning that they almost certainly find similarities as they read).

One of the most prolific writers who employed this technique was Agatha Christie, whose titles – with Christie being the best selling novelist of all time – are amongst the world’s most familiar. While a number of Christie’s titles are admittedly somewhat ‘on the nose’ (including The Murder on the Orient Express, Death on the Nile and A Murder is Announced), she was also unique in making careful allusions. For example, By the Pricking of My Thumbs is taken from a line in Macbeth; The Mirror Crack’d from Side to Side refers to Tennyson’s famous poem ‘The Lady of Shalott’ (1833). More peculiarly, however, a handful of her other titles allusions to children’s nursery rhymes: a small selection of titles include One, Two, Buckle My Shoe, Hickory Dickory Dock and A Pocket Full of Rye.

The most stimulating novel titles are those which are, in fact, allusions to other works of literature.

As an English Literature student, I admit that the consideration of titles rarely crops up in my weekly tutorial essays; however, when scrutinised, one can draw a number of enlightening conclusions about an author and their motivation – and inspiration – behind a text.

However, when examining the significance of book titles, one must firstly consider a fundamental question: is a title chosen before, or after a book is finished? i.e., did the author set out in writing a novel with a clear allusion in mind (was it inspired by a particular source?), or was it only after the text’s completion that the text was named after similarities were noticed?

This question can be answered in relation to Christie’s novels. Although multiple titles of hers were only lightly influenced by nursery rhymes, her prominent use of the genre can be seen in And Then There Were None. For those who have not read the novel: a group of strangers are all invited to a remote island off the English coast; when they arrive, they each find a framed copy of nursery rhyme, entitled ‘Ten Little Soldiers’, and a group of figurines on the dining room table. One by one, each guest dies in a manner which parallels the rhyme and, for each murder, a corresponding figurine is found broken on the table (until – unsurprisingly – there are ‘none’ left).

Although it’s true that the title of the novel is a reference to Christie’s own rhyme, the verse in the novel is actually a variation of ‘Ten Little Indians’, a pre-existing nursery rhyme altered by Christie. Unlike her other novels which reference nursery rhymes, its inclusion is fundamental, for the killings are scheduled by each couplet. For example, Emily Brent is injected with potassium cyanide (“Six little Soldier Boys playing with a hive; /A bumblebee stung one and then there were five”); William Blore is killed as a result of being struck on the head with a bear shaped clock (“Three little Soldier Boys walking in the zoo; /A big bear hugged one and then there were two”).

The terrible playfulness of the rhyme is very much represented in the material of the story, for the cunning murderer forces those who they deem to be most guilty to endure the paranoia of waiting to die. Therefore, Christie’s allusion is a prominent textual feature: it creates a terrible monotony in the murders, with the reader finding themselves helpless against the inevitably of the predicted deaths – there is a sense in that the rhyme itself is the determining each murder.

After the success of And Then There Were None, Christie proceeded to write a number of novels whose inspiration was taken from other nursery rhymes. For example, A Pocket Full of Rye references ‘Sing a Song of Sixpence’ – it features murders which correlate directly to the original rhyme: for example, Gladys (the maid) is found dead outside by the washing with a clothes peg on her nose. In fact, 7 of Christie’s later titles alluded to nursery rhymes. However, it seems that Christie’s later allusions seem somewhat contrived – almost a gimmick to appeal to her demanding audience. While it is true that the use of the rhymes admittedly boosts the murders’ sinister tone, one begins to question their continual usage – for the allusions are increasingly less effective within the actual story. It could be argued that Christie deliberately employed recognisable allusions as an easy means of persuading would-be readers.

Christie’s allusion is a prominent textual feature: it creates a terrible monotony in the murders, with the reader finding themselves helpless against the inevitably of the predicted deaths – there is a sense in that the rhyme itself is the determining each murder.

Christie is not the only author who may have been too eager to delve into the canon in search of inspiration: A Brave New World, Aldous Huxley’s staple dystopian, is actually an excerpt from Miranda’s speech in Shakespeare’s The Tempest (“How beauteous mankind is! O brave new world, / That has such people in’t”). Throughout the novel, Huxley includes an abundance of Shakespearean quotes (I count 51…). John the Savage, for example, is only able to articulate his feelings in terms of Shakespeare’s drama, regularly quoting The Tempest, King Lear and Othello. However, I dare say a number of students will have read the book completely uninhibited by their unawareness of the title’s origin. In reality, it is likely that only a small proportion of the readership would naturally recognise the exact source: who, other than an academic, would remember three fairly ordinary words from an entire play? In comparison, as least most people would recognise the lines of a familiar nursery rhyme…

In the words of T.S. Eliot in The Sacred Wood: “Immature poets imitate; mature poets steal; bad poets deface what they take, and good poets make it into something better, or at least something different.” Although referring to poets, this sentiment can still be applied to novelists: if a writer ‘steals’ the meaning of a work which they allude to, without making it “into something better”, this must be automatically questioned, for the deliberate inclusion of allusions within book titles – those which fail to be continued throughout the actual text – seem largely disingenuous. This is arguably the case with Huxley’s novel; his persistent Shakespearean allusions reek of someone who is trying to convey their being well-read. The 51 references to Shakespeare in A Brave New World scream: ‘I know Shakespeare!’.

Christie’s allusion is a prominent textual feature: it creates a terrible monotony in the murders, with the reader finding themselves helpless against the inevitably of the predicted deaths.

If a writer ‘steals’ the meaning of a work which they allude to, without making it “into something better”, this must be automatically questioned, for the deliberate inclusion of allusions within book titles – those which fail to be continued throughout the actual text – seem largely disingenuous.

On the other hand, despite the tenuousness of some of her later allusions, I believe that Eliot would have been compelled to respect Christie’s ingenuity; she was able to take established, age-old stories and tailor them to an entirely different genre. Christie matured – even, subverted – children’s rhymes for an adult audience. Even if the importance of her allusions decreased as she wrote, one cannot blame her for trying to appeal to a mass audience.

Writer’s allusions afford the reader with an illuminating insight into their intentions; allusions which are too weak or, conversely, too exaggerated, often denote a writer’s reasoning for making the very allusion. For Christie, whose first nursery rhyme-inspired novel proved a great success, it is understandable why she might have strived to make multiple allusions to the genre in her subsequent novels. On the other hand, Huxley’s motivations in aligning his own work to Shakespeare’s drama arouses suspicion. However, despite the multitude of implications evoked by novels’ titles, it is certain that almost any allusion is revealing of a writer’s intent; whether an important textual feature of a novel, or a merely passing reference, it is undoubted that the literary allusions with novels’ titles not only inform the reader on the text, but on the writer themselves.