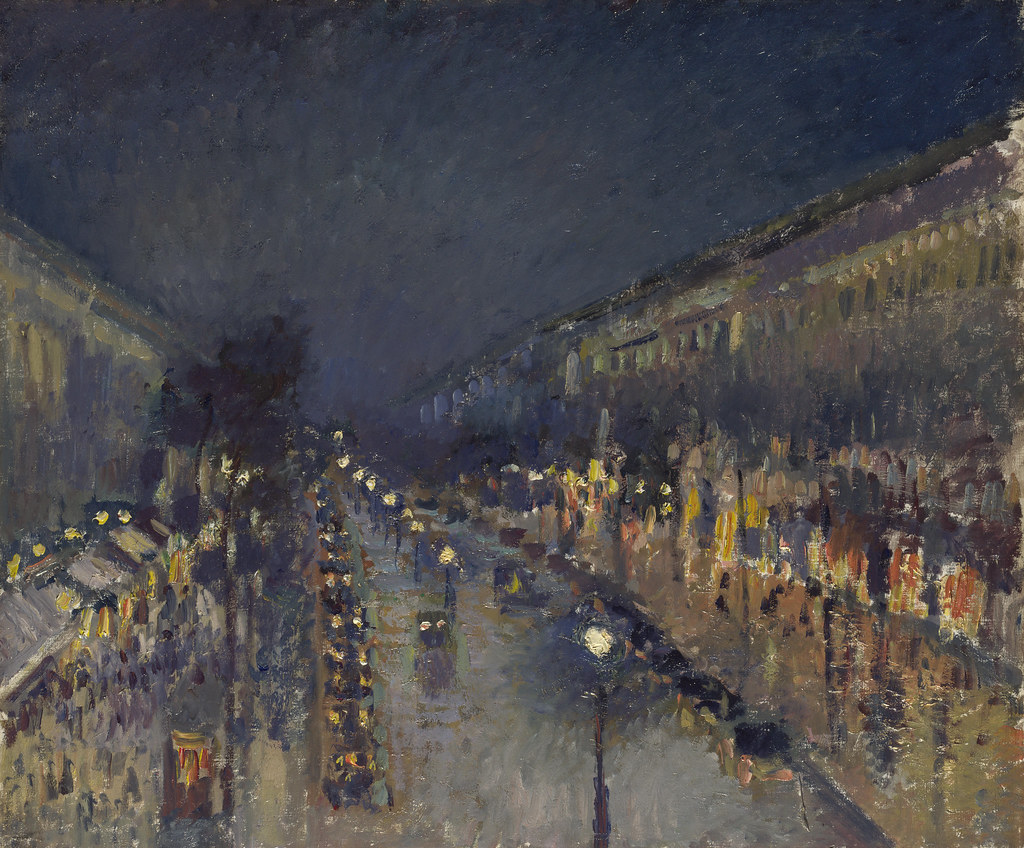 ‘A Love Story’ by Émile Zola

Image Description: “The Boulevard Montmartre at Night’ by Camille Pissarro

This little novel by Zola (published in 1878) begins in the cloistered luxury of a bourgeois bedroom, bathed in blue light. It is here we encounter Hélène, the hero of the story, who is deep in a heavy, drowsy sleep. Hélène is suddenly woken by “the babble of a child in pain”. It is her only child, 11-year-old Jeanne, who is delicate and weak, often taken ill. She is having a violent seizure. Hélène frantically rushes to get the doctor, but he is away. In desperation she rings the bell of another house, to find that it is in fact the home of another doctor, Doctor Deberle. He comes to her house and attends to Jeanne, until at last she sleeps soundly.

The complex and passionate relationship that develops between Deberle, Hélène and her daughter is the engine of the novel, which allows Zola to explore wider social themes – most powerfully, the imprisonment of women within a cruel bourgeois society. Zola is sharply critical of the superficiality of bourgeois life, and the way it stifles the energy of female emotion. Marriages are passionless, taste is frivolous, even religion is merely a pleasurable pastime.

Hélène is an average Parisian widow, spending her days reading and sewing, watching the view of Paris from her window with a contented distance. She relishes the unchanging regularity of her life, but her unexpected and passionate love for Deberle shatters this, transcending the mundanity of this existence. It offers a chance of escape, a quasi-religious step into the big unknown.

The moment she realises she is in love, her view of Paris opens up to her, bathed in a rush of golden light. “…the city, shot through with golden arrows… had not yet made up its mind to reveal itself from under its gown of lace.” Paris is likened to a vast ocean: “Hélène fancied she could feel the strong gusts of wind in her face, the tang of the ocean…” Her view of Paris is a macrocosmic reflection of her own emotion, bursting with the hope of renewal. The outside world is no longer removed from her, but vibrant and immediate.

But this hope of escape is futile. It is not Deberle’s wife who threatens Hélène’s love for him, but rather her own daughter. Jeanne’s fierce jealousy casts a cold shadow over the novel: anyone who threatens to hold her mother’s affections is spurned and hated. Jeanne is a fascinating character and I could not quite get my head around her. She is often full of pathos – a weak convalescing child full of delight at the sunshine of a spring day – and her illness calls to our sense of pity and compassion. But she is also spiteful, selfish and ultimately destructive. When she figures out that her mother and Deberle are lovers, she won’t let either of them touch her, even as she is in the throes of illness. Her anger at their love is the obstinate and illogical anger of a toddler, expressed in hyperbolic outbursts of emotion, to the point that she makes herself even more ill. I hated and pitied her at the same time.

Her view of Paris is a macrocosmic reflection of her own emotion, bursting with the hope of renewal. The outside world is no longer removed from her, but vibrant and immediate.

Jeanne’s death is the climax of the novel: the child who brought the lovers together at the start is ultimately driven to self-destruction by jealousy. Heartbroken at being left alone by her mother, Jeanne opens the window onto the wet, dank Paris air, so that she is “soaked up to her sleeves” and “ice cold”. A torrent of jealous and bitter thoughts run through her head. The illness that this chill brings on – her final illness – is almost an act of revenge against her mother’s betrayal. In death, Jeanne continues to walk the line between a kind of tragic heroine, and a spiteful spoilt child. Her last expression is one of “terrible anguish” but is later characterised as “a vindictive childish pout”.

So Jeanne dies, and Hélène marries an old friend who promises her security. She thinks of her passionate love affair with the doctor as a blip in her life, an error, something she can no longer understand. The final chapter has her standing in a frozen Parisian landscape which is “indifferent, its gigantic face dispassionate”. It is no longer the companion that reflects her inner thoughts with its light and weather, but a cold and emotionless stranger.

For me, the genius of this novel is the way it weaves together extreme, heady emotion with an intense attention to the details of everyday life. The streams of consciousness, often powerfully expressed through the changing face of Paris, are grounded in the minutiae of 19th century French lifestyle. It is in the midst of a children’s fancy dress party that Deberle declares his love for Hélène: there is this strange mixture of evocative superficiality and a timeless, soulful passion. We begin to get a sense of Hélène throwing off her emotional inertia and becoming emboldened with life when she is swinging on a swing in the Deberles’ garden. Zola perfectly demonstrates that the most dramatic and lifechanging of events can happen in the most mundane of circumstances. It is here that we can see the Impressionist spark within his writing: it echoes the doctrine of Baudelaire, who argued that the painter must abandon flights of fancy and instead seek the “heroism of modern life” and “extract the eternal from the ephemeral.”

For me, the genius of this novel is the way it weaves together extreme, heady emotion with an intense attention to the details of everyday life.

What resonated the most strongly with me are those stunning descriptions of Paris. Zola is painterly – Impressionistic – in his descriptions, picking out details within the colourful, atmospheric mass of the whole. It is like looking at an Impressionist street scene – all smoke and light, all cold weather and drizzly rain, but in amidst all that there is the ebb and flow of daily life, the small details of modernity.

Hélène’s view of Paris from her window is highly unrealistic, breaking the pinpoint naturalism of the novel, but this doesn’t matter: Paris is a vision, raising its beautiful head before her to commune with her emotions. We can smell the air, taste the rain, and our eyes burn with the light from the sky. For me, it is Paris that makes this novel so captivating: its dangerous beauty is at the very heart of Zola’s love story.

“The Boulevard Montmartre at Night” by DJANDYW.COM is licensed under CC BY-SA 2.0