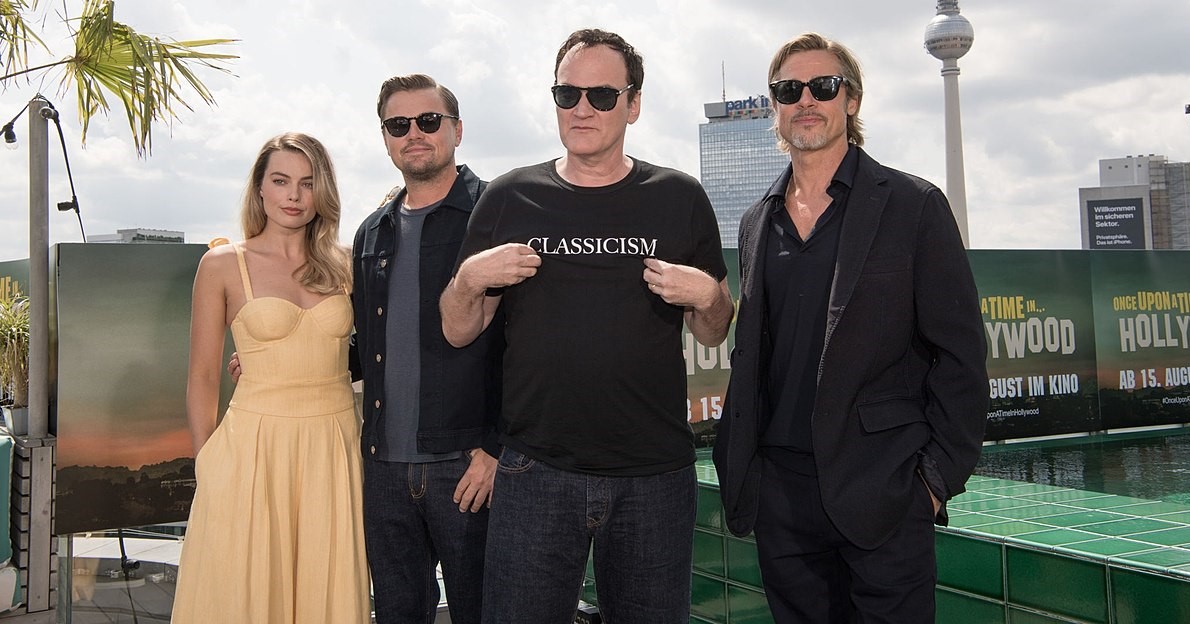 Once Upon a Time in Hollywood: Entertaining, yet uneven

Quentin Tarantino’s passion for cinema has always been a dominant presence in his work. It’s there in his use of pastiche, in his references to other films and in his gleeful engagement with genre tropes. In his latest effort, it’s more evident than it ever has been. His ninth film, Once Upon a Time in Hollywood, feels like a love letter to the silver screen.

Set in Los Angeles in 1969, it follows aging actor Rick Dalton (Leonardo DiCaprio) and his stunt-double, Cliff Booth (Brad Pitt), as they attempt to navigate an industry in which they are increasingly irrelevant. A few scenes of sudden violence aside, the story is essentially a slice of life. Yet there’s a sense of unease present throughout. Dalton lives next to Sharon Tate (Margot Robbie) who is destined to die before the year’s end. A vibrant young actress whose star is on the rise, her character serves as his foil. For obvious reasons, the Manson family, who at this point are a Hollywood mainstay in their own right, also make an appearance.

This film is brimming with period trappings. The characters speed past billboards in their convertibles and every room has a radio. Not a moment goes by without a shot of poster, a cameo or a cut away to a TV show clip. There’s nothing subtle about its allusions; in some moments they seem to be the film’s main focus.

Once Upon a Time in Hollywood is a showcase of the era’s culture, but it’s as much about the process of making films as it is about the films themselves. Many scenes feature the characters acting or hanging around film sets. The dialogue is full of truisms about the film industry, some of which seem to be comments on the director’s own career. In one memorable sequence, we watch DiCaprio’s character struggle to remember his lines as he reshoots a scene several times. Tarantino attempts to immerse the viewer in the atmosphere of late 60s Hollywood and for the most part, he’s successful.

For every scene that captured my imagination, there was another that left me feeling underwhelmed

As well as being an exploration of Hollywood both on and off screen, the film is also about growing old, friendship, insecurity, the media, and the end of the idealism of the 60s. However, none of these elements felt fully fleshed out. The film’s undoing is that it attempts to be too many things at once. Many of the stylistic elements it contains, such as clips from Rick Dalton’s TV show, are boring or take up an unnecessary amount of time in a movie that is already jam-packed. The cameo appearances by famous stars, including Bruce Lee and Steve McQueen, best illustrate this problem. Mildly amusing at best, at worst they’re boring, or potentially offensive in the case of Bruce Lee.

For every scene that captured my imagination, there was another that left me feeling underwhelmed. Subplots and character beats are introduced and then never revisited, leaving a story that meanders for the better part of two hours until its bombastic climax. This isn’t an issue in and of itself, but the film lacks the thematic unity needed to make this approach work. Despite its slow pace it’s bursting with different elements and ideas. Yet it lacks a single thread to bind them together.

Tarantino’s juggling of the Sharon Tate side plot that runs alongside the main storyline only exacerbates this problem. Whilst Margot Robbie’s performance is as good as it could be, the script gives her little to work with. Other commentators have noted the prevalence of the male-gaze in this film, but the main problem is that her character lacks depth. The audience know next to nothing about Tate aside from the fact that she’s beautiful and happy.

The best of the Manson related scenes were tense, perfectly edited and my favourite of the entire film. The rest only made me long to return to the stronger of the two plots. Tarantino should be praised for his refusal to romanticise the murders or play into the Manson myth (the man himself only has a blink or you’ll miss cameo). But at many points, I wondered whether two storylines would work better as separate projects.

The film’s saving grace is the performances of its two leads. Funny in some scenes and touching in others ー the friendship between Rick Dalton and Cliff Booth forms the emotional backbone of the film. Leonardo DiCaprio and Brad Pitt have undeniable chemistry. And as sharp as the dialogue is, it wouldn’t be nearly as effective without the sense that these men share a deep affection for each other.

Though by no means innovative, DiCaprio’s take on a middle-aged star who’s past his prime manages to provoke both embarrassment and sympathy. One scene in which his character berates himself in his trailer for forgetting lines is a feat of comedic genius. However, it’s his co-star who gives the standout performance of the film. Pitt brings an easy charm to the role and does a fantastic job of embodying the cool-headed Western hero. As always it’s difficult to pinpoint why he’s so charismaticーhe just is. I was also impressed by Margaret Qualley’s unnerving performance as ‘Pussycat’, one of the Manson cult members.

In the end, Once Upon a Time Hollywood left me feeling conflicted. I was entertained for the majority of its runtime, but when the credits rolled I wasn’t quite satisfied. Whilst it had beautiful visuals and excellent performances by its main cast, it was uneven, bloated, and in dire need of another edit — a fitting verdict for a film that showcased the heights of Hollywood excess.