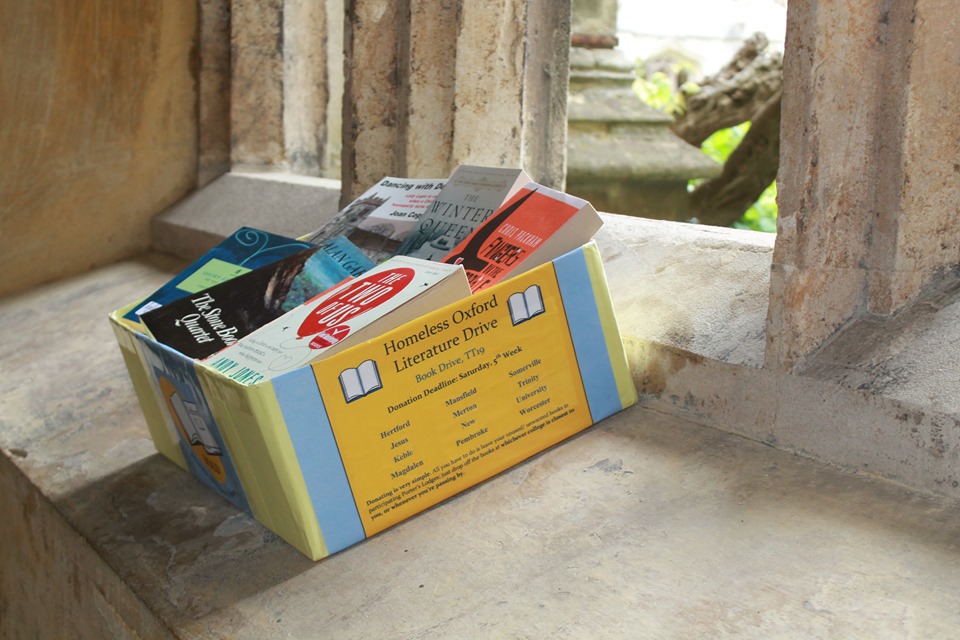 Beyond Books: Speaking up for Oxford’s Homeless

For a newly-launched non-profit, founded and run by two Oxford students, entirely through one social media platform, we were overjoyed to have received 70 donations for our first ever book drive: as Homeless Oxford Literature Drive (HOLD) approaches its second drive this MT19, we hope to raise many more books, and want to encourage as many people to donate as possible.

Sat in a small and dark student room somewhere at the end of Hilary 2019, we were reflecting on our time spent at Oxford so far and, aside from the memories of our first lectures and essays crises, the mornings spent at Gloucester Green Market or late-night snack trips, things became suddenly more solemn as we recalled how shocking the issue of homelessness was – and still is – in a city which is world-famous for it’s academic, social and financial prowess.

When we first arrived to start our studies, such a widespread issue of homelessness was the last thing we expected. How can it be that the city which is home to an institution worth £6.1 billion still sees endemic suffering on its – literal – doorsteps? When dozens of the world’s present – and future – industry and political leaders have walked Oxford’s cobbled streets, who allows this issue to be simply swept under a rug of mortar boards and Headington stone?

How can it be that the city which is home to an institution worth £6.1 billion still sees endemic suffering on its – literal – doorsteps?

We started talking about how we could make a difference; while it’s not as though giving spare change here and there isn’t useful, we wanted to make a bigger impact – one which might even encourage others to address the same issue which was troubling us.

We eventually began to formulate the beginnings of HOLD, something which is – as many good things are – pleasantly simplistic: we collect students’ unused books and distribute them amongst the city’s homeless community, providing much-needed enjoyment and respite. After all, what does Oxford have more of than anywhere else in the country?

For those sleeping rough on Oxford’s streets – or, indeed, anywhere in the world – their daily experiences have serious implications on their mental health; while we know that books alone will not solve the wider issue of homelessness, we know first-hand how the books we have collected have provided Oxford’s homeless readers with genuine pleasure and ‘literary escape’ from life on the streets.

Launching at the beginning of 2nd Week, we nervously waited while donations came in; although friends and students around us seemed positive about the concept, we had no idea if people from the wider University
would pay attention; but, after a few weeks, we began to collect the donations from the various lodges around the city: we raised over seventy books, meaning that homeless individuals had the liberty to select their preferred genres and enjoy multiple books for some time.

HOLD is our way of reaching out to Oxford’s homeless and reassuring them that, while the institution as a whole might seem painfully ignorant, some facet of the University is trying to show their support; even though some colleges – they know who they are – quietly accumulate millions of pounds worth of profit each year, at least some of the institution won’t pretend the crisis isn’t there.

HOLD was also created as a means by which to inspire greater discussion within the University about the issue of homelessness. Through the small act of donating, everyone is helping to grow a student platform that is working ti increasingly draw attention to the crisis. Even if our termly book drive simply get mentioned over coffee between two friends, this might encourage them to donate some tins of food or a blanket to a local charity – a positive act which might not have otherwise occurred.

With the undeniable dominance of the institution, students often disregard the Oxford locality altogether; many are ignorant to the realisation that, when those eight weeks of bops and formals are over, and the students return home, the ordinary – and harsh – lives for the city’s homeless continues, because: unlike term, homelessness is indefinite.

Unlike term, homelessness is indefinite.

Although our first drive generated a lot of positive discussion regarding Oxford’s homeless community, however, it would be wrong to ignore the difficulties we faced. One of the most shocking displays of ignorance we encountered was on one of our actual distribution days: a homeless woman we know had just gleefully selected a copy of The Count of Monte Cristo (which is apparently one of her favourites) when a well-dressed, academic-type detained us suddenly on Brasenose Lane. Before we had time to even speak, he began to rifle through our books and started using degrading language; the abuse the one woman received from this professor was particularly hurtful not only due to its crude, condescending nature, but because it was founded in baseless stereotypes – his insinuations centred upon his bigoted misconception that rough sleepers were illiterate (“Where did you learn how to read?!”).

Despite the abusive individual being sent quickly on his way by the homeless woman, we were utterly shocked by the audacity and inexplicability of such abuse; however, we were able to learn much from the woman, as she spoke to us at length about how she loved reading due to its ability to transport her anywhere in the world. We became fortified at that moment to not only use HOLD to try and better the day-to-day experiences of the homeless community, but to also use our platform to challenge and address the dehumanising ways rough sleepers are unfortunately still viewed by the privileged of Oxford.

This MT19 will be our second book drive, and we’re hoping to raise well over TT19’s achievement of 70 books. While the specific details will be finalised and released before the launch in 2nd Week, donations can be made across the city, in a number of designated college libraries, lodges and JCRs.

We are trialling a new system of donating in a number of JCRs, which we hope to then extend to every University college JCR for HT19. Please remember to donate your unused books, and follow us on Facebook for more information.