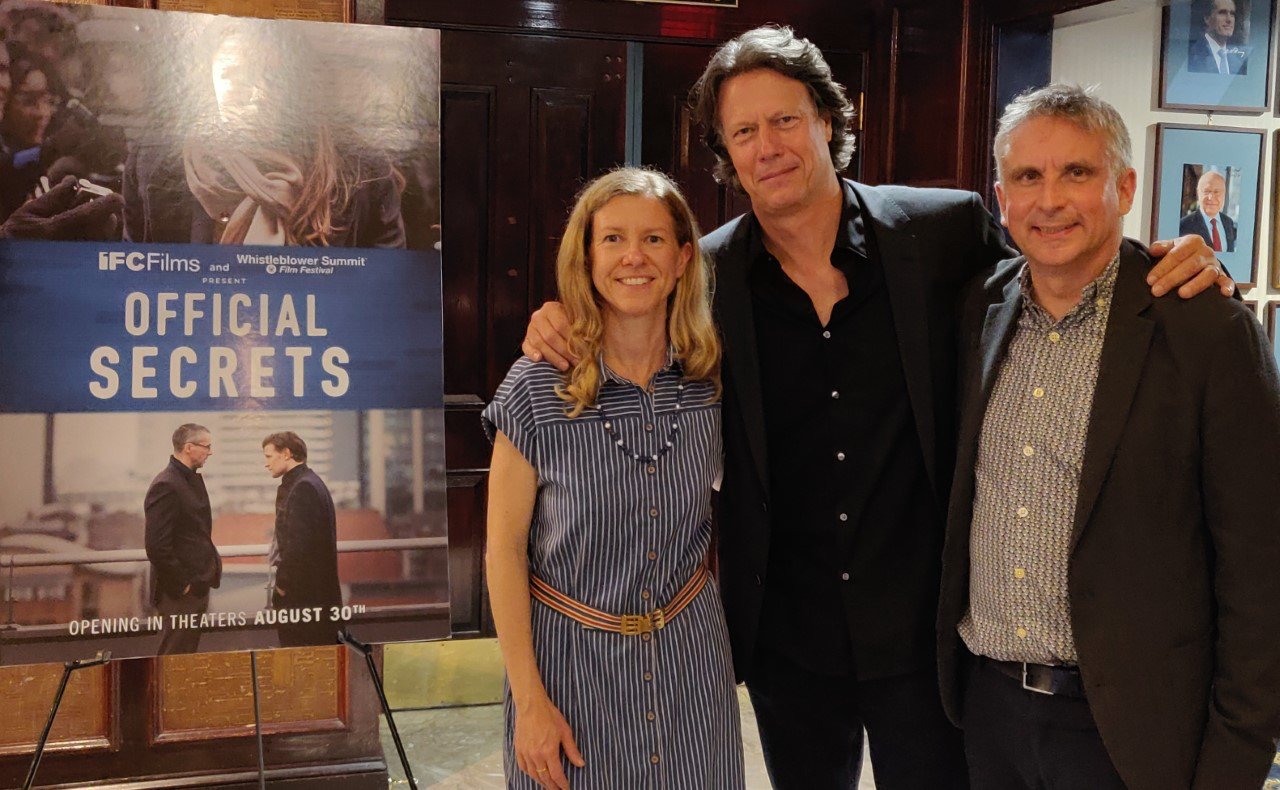 From left to right: Katharine Gun, Gavin Hood – Director of the Official Secrets movie, Martin Bright – Journalist who worked on the article

24th September, the day that Johnson’s decision to suspend Parliament was ruled unlawful was the same day that I heard the story of Katharine Gun. Two political situations were brought to light to me that day, 16 years apart, but both highlighting unlawful political decisions. As I watched Johnson’s story unravel before me, I became intrigued about the whistleblower of the past who jeopardised everything to bring to light the illegal actions of the US government.

Katharine Gun was a translator at GCHQ, when she received an email in her inbox from Frank Koza, a leading figure in the American National Security Agency. The email was a request to tamper with the debate of whether or not to invade Iraq. Katharine smuggled the printed email out of GCHQ and leaked it to the media, on the 2nd March it was featured on the front page of The Observer. Less than a week after the exposure, she turned herself over to GCHQ and was immediately arrested and charged with neglect of the Official Secrets Act.

However, on the first day in court, the case was dropped, the Guardian stating that “when the prosecution realised that evidence would emerge … that even British government lawyers believed the invasion was unlawful.”A question that I had been eager to ask Katharine as soon as I heard of her story was does she regret her decision to leak the email? She lost her job, risked a prison sentence, and in the same month that the corruption was exposed the military invasion of Iraq began.

Could you talk me through the day when you read the email from Frank Koza?

It was Friday 31st Jan 2003, I had just sat down at my desk and was reading through emails for the day.

Can you outline to me what was said in the Koza email?

The email was a request from the NSA to GCHQ to access the home and office communications  (phone and emails, fax etc) of the UN delegates: Bulgaria, Chile, Cameroon, Angola, Guinea and Pakistan for the purpose of ‘gathering the whole gamut of information that could give results favourable to US goals or to head of surprises’

What drove you to leaking the email?

I had spent many hours researching the situation in Iraq, I was concerned like many millions of people around the world that a war was unjustified and catastrophic. The email exposed what was going on behind the scenes, how the intelligence services were undermining the diplomatic processes in favour of this war.

If you had your time again would you act in the same way?

If the circumstances were the same, yes, I would.

Did the leaked email have the scale of reaction that you expected?

Yes and no. I didn’t expect that it would be reproduced and splashed on the front pages of The Observer Newspaper, on the other hand, seeing as it was, I believe that the lack of coverage in the UK media following that expose was reprehensible.

What drove you to turn yourself in to GCHQ?

I didn’t feel I could lead a double life, forever hiding what I had done and continue to work there with a clear conscience.

I didn’t feel I could lead a double life, forever hiding what I had done and continue to work there with a clear conscience.

Why do you think that the prosecution were eager to drop the case?

At the time, very little information regarding the run-up to the war had been leaked, principally, the then attorney general’s advice was still secret.  The case, had it gone to trial, would have cracked that all open. In addition, the Defence of Necessity would have been properly tested in court against the OSA and finally, an election year was coming up and it would look extremely bad for Tony Blair.

To what extent do you think that there should be transparency of governmental discussion/ documentation/ communications, etc?

There has to be a balance, at the moment, there is no balance.  Far too much is classified at a much higher than necessary classification.  In addition, increasing numbers of non civil servant contractors are being required to sign the OSA, this leads to a lack of accountability and transparency.

Boris Johnson’s suspension of Parliament has today been ruled unlawful, another illegal act from the government during a period of great importance. Would you agree that hidden information on this situation being leaked would be justified?

Whistleblowing on matters which are in the public interest, such as fraud, corruption or illegality should be brought into the light, but the risks to any genuine whistleblower in that situation are extremely high.  The reality is that ministers often leak or disclose information for one reason or another, they are rarely if ever prosecuted, officials on the other hand, are.