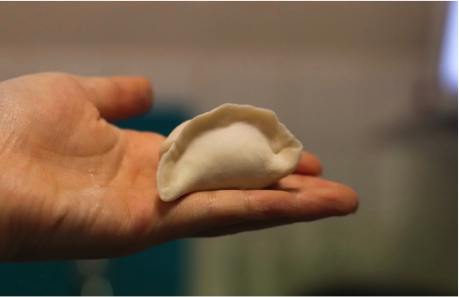 “Well they are a kind of dumplings but they really aren’t.” This is was me almost every day when my foreign friends came to visit me in Shanghai. It always frustrates me that I can only use the word “dumpling” to name all Chinese foods with a piece of dough wrapped around some filling. The differences between the varieties of dumplings in China is a great representation of the diversity of culture across the vast realm of the country. Much is lost in that single word translation that names foods that differ in taste, shape, and cultural significance. Simply Jiaozi, what “dumpling” most frequently refers to, have so many variations that showcase the cultural diversity behind Chinese cuisine.

Most of my Chinese friends would agree that when we say dumplings, we are referring to jiaozi, which is what the western world is most familiar with. They are made by folding a thin piece of dough in half with the filling inside and the seal forms a nice curve on top of the jiaozi (see pic). These are widely consumed in China, but they are more typical for Chinese New Year in the north than south. The filling varies from minced meat (usually pork or beef) to chopped vegetables to a combination of both (a typical combo: pork with celery or white cabbage). Jiaozi are boiled and served usually with a vinegar dip. The dough needs to be thin but with enough structural integrity that when you bite into it you can feel it between your teeth. Satisfaction peaks as the umami of that juicy and tender filling bursts in your mouth. The combined flavour of components and seasoning of the filling is particularly pleasing in contrast to the plain but soft dough wrap on the outside.

Jiaozi is very important on the Chinese New Year’s Eve dinner table, especially in the north. It is a signature for the festival and many families have kept the tradition of making their own dumplings. The filling varies based on different regional ingredients and personal preferences. Northern people also have the tradition of eating jiaozi on Winter Solace to prevent frostbites on ears (since the dumplings look like ears) according to folk sayings, but also because the fillings of jiaozi can warm people up and prepare them for winter. However, people in the south prefer tangyuan over jiaozi as celebratory food for New Year. Tangyuan wraps are made from rice flour and have a chewy and sticky texture which is very different from the wheat flour dough wraps of jiaozi in the north.

**Jiaozi in the south: Jiaozi can also be steamed, but these zhengjiao (steamed dumplings) usually have a rather transparent and stretchy wrap made from rice flour as oppose to the wheat flour used to make boiled jiaozi. Zhengjiao is more typical in the south, especially in Cantonese cuisine. One of the most famous dishes is probably the har gow (Cantonese), xiajiao in mandarin (literally shrimp dumplings) (pic below). Due to the climate differences between northern and southern China, the north has abundant wheat plantation that survives better in dryer and colder places while the south grows rice that need water and warmth to thrive. This difference can be found between the wrappings of jiaozi in northern and southern China.

**A relative of jiaozi—guotie (literally translation: potstickers): Guotie, also known as jianjiao (literally pan-fried dumplings), look like jiaozi but they are pan fried, giving them that signature golden crispy bottom which distinguishes it from typical jiaozi. The filling varies based on regions and personal preferences and they are usually served with a vinegar and/or chilli oil dip as a popular breakfast food in some areas.

Distinctions need to be made between Japanese gyoza and Chinese potstickers. They are similar, but typical filling of gyoza has cabbage and chopped garlic which can’t be found in Chinese guotie. Gyoza have thinner and chewier wrappings than those of potstickers. The method of cooking is also different. While Chinese potstickers are made from previously made boiled jiaozi, Japanese gyoza are directly pan-fried. Different ingredients and cooking methods result in the different taste of these two similar dumplings.

This is just a short introduction to jiaozi, but there are more to the amazing Chinese cuisine that showcases how diverse the culinary culture is on the vast realm of the country.