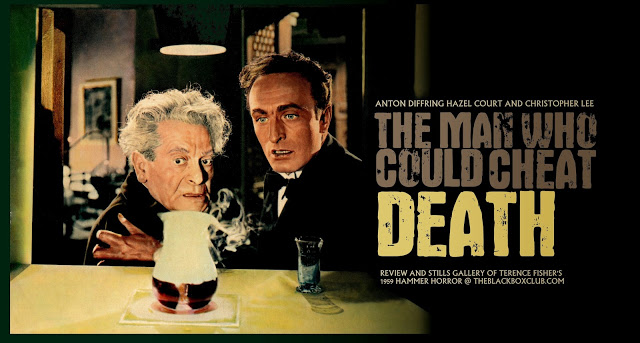 From Dracula (1958) to The Devil Rides Out (1968), in their 82 year history, Hammer Films Productions have produced some of the most iconic British horror films released in the 20th century. The Man Who Could Cheat Death isn’t one of those films. One of the lesser known entries of the production company’s output, it’s rarely list alongside their best work. But drawn in by its eye-catching poster and the fact that it was the only Hammer Horror film available on Netflix, I decided to give it a try.

The story revolves around the mysterious Georges Bonnet (Anton Diffring), a doctor in 19th century Paris who is actually over a hundred years old. His long life is due to the effects of a green serum which he extracts from the thyroid glands of his unfortunate victims. He seems set to live out the rest of eternity sculpting and womanising, until he realises that the potency of his miracle serum is lessening with each dose. In his desperation to live to see two hundred, his methods become even more extreme.

Whilst the idea of thyroid-fueled immortality is original to say the least, I couldn’t say the same about the film as a whole. Subverting common tropes has never been one of the strengths of Hammer Horror films, and The Man Who Cheats Death is no different. The arguments the characters make are the same ones that have been made in every story about mad scientists since Mary Shelley published Frankenstein. As I was watching Bonnet and his friend Ludwig (Arnold Marlé) beat this dead horse for the hundredth time, I found myself wishing they’d kill each other so that the plot could advance.

The performances don’t hold up any better. Anton Diffring’s portrayal of the titular character provides much of the film’s entertainment value, though I doubt that this was intentional. For a man on the brink of death, he doesn’t make much of a case for himself. This is perhaps because the “horrendous fate” that awaits him consists of turning green and looking a bit worse for wear. The scenes in which he’s supposed to be charming are hilariously creepy and his voice has all the emotion of the text-to-speech audio on Google Translate.

I can’t say I didn’t enjoy watching The Man Who Could Cheat Death. I’d recommend it based purely on its comedic value. For all its faults I was never bored. It might not be very good, but is entertaining. With Halloween just around the corner, it’s a fun choice for a movie night with friends. Just don’t watch this film expecting it to be anything more than what it is: a campy exploration of immortality that has more clichés than scares.

Midnight in Paris: Sunset for Allen?