Professor Sir Peter J Ratcliffe, Director for the Target Discovery Institute within the Nuffield Department of Medicine at Oxford University and Director of Clinical Research at Francis Crick Institute, London, has today been announced as a winner of the Nobel Prize in Physiology or Medicine.

Sir Ratcliffe was announced as a winner of the Prize alongside William G Kaelin, Jr of Harvard University and Gregg L Semenza of Johns Hopkins University. Together they discovered the key mechanisms that our cells use to detect and respond to low oxygen levels, known as ‘hypoxia’.

“The fundamental importance of oxygen has been understood for centuries, but how cells adapt to changes in levels of oxygen has long been unknown,” the Nobel Committee announced.

“Thanks to the ground-breaking work of these Nobel Laureates, we know much more about how different oxygen levels regulate fundamental physiological processes.”

Sir Ratcliffe said: ‘I’m honoured and delighted at the news. I’ve had great support from so many people over the years. It’s a tribute to the lab, to those who helped me set it up and worked with me on the project over the years, to many others in the field, and not least to my family for their forbearance of all the up and downs.’

Sir John Bell, Regius Professor of Medicine, University of Oxford, said: ‘Sir Peter Ratcliffe has made a major contribution to our understanding of how cells respond to low levels of oxygen. It is likely to have profound implications ultimately for the treatment of cardiac diseases and cancer. It is an impressive story of how a clinician scientist can combine ground-breaking basic science with caring for patients within the NHS.

This year’s winners are awarded a gold medal, a diploma and a share of the nine million Swedish kroner (£740,000) prize money.

Oxford most expensive city in UK 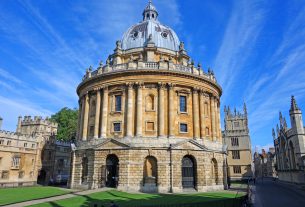