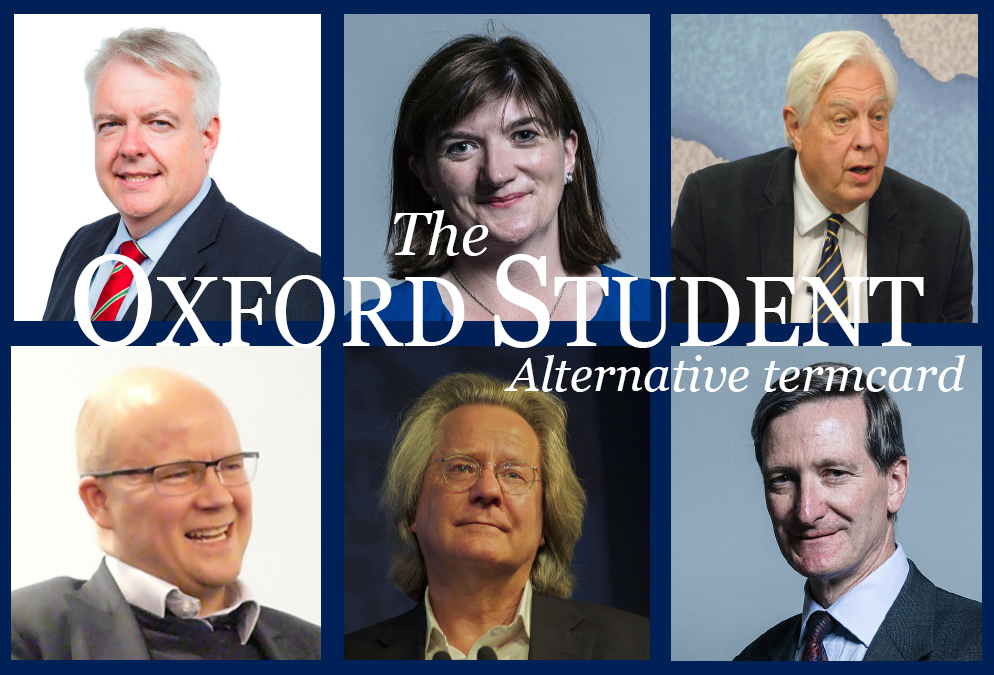 In the mood for a rousing speech, interesting seminar, or lively debate but not willing for fork out the [insert astronomical sum here] for a Union membership? Don’t worry, there are plenty of free speaker events coming up this term that you can get your teeth into without emptying your bank account.

If you’re looking to kick off term with a  thought-provoking discussion, we have you covered. On Monday of week 1, Professor Will MacAskill will provide an incite into ethics with his talk on ‘What we owe the future’. This will take place in St John’s College at 6pm. If psychology is more your thing, then Dr Jens Koed Madsen is giving a talk on psychologically informed micro-targeted political campaigns on Friday of week 1, also in the Oxford Martin School. Also on Friday, Shirley Williams will be talking about her life in politics for OULD.

David Miller will be appearing for the PPE Society to give a talk on national self-determinism in the New Seminar Room of St John’s College on Monday of 2nd week. Tuesday of 2nd will see the Hayak society debating socialism, with their debate ‘Socialism: the failed idea that never dies’. Also in 2nd week, on the Thursday, Cllr Shaista Aziz will be appearing on an OULC panel dedicated to discussing homelessness, at Open House Oxford.

Fill your fourth week with consideration of all of life’s big questions with Richard Swinburne’s talk on God and morality (Monday of 4th, location tbc), Prof. Jeffrey Braithwaite’s lecture on how we can improve healthcare (Tuesday of 5th in the Radcliffe Observatory Quarter), and Dario Kenner’s exploration of the climate crisis. On Friday of 4th, the PPE Society will continue its record of big names, with Dominic Grieve. If this week isn’t busy enough for you, pop along to OxSID’s event with Ha-Joon Chang, renowned development economist.

If you aren’t already sick of Brexit, on Monday of 5th, Prof. Stephen Fisher will be discussing the UK’s decision to leave the EU and what it has meant for British politics as a whole. From British politics to student politics, student debaters from each of the three major political societies – OUCA, OULD, and OULC – will be facing off in the Three Party Debate on Tuesday of 5th.  OxSId will be back with another important talk with the founder of Extinction Rebellion, Roger Hallam. Finally, on Friday of 5th, former First Minister of Wales ,Carwyn Jones, will be discussing his life in Welsh politics – croeso pawb!

Courtesy of the International Relations Society, Dr Katherine Millar of LSE will be delivering a talk on the relationship between gender and politics in the international political climate. A more controversial one – Thursday of week 6 will see the PPE Society playing host to Toby Young.

One for the corporately-inclined people amongst us, Dr Stephen Vaughan will be asking whether corporate lawyers are still professionals in the Manor Road Building on the Monday of 7th.

Finally, to round off the term, why not pop along to PPE Society’s talk with Prof. A.C. Grayling on how we can reform democracy?