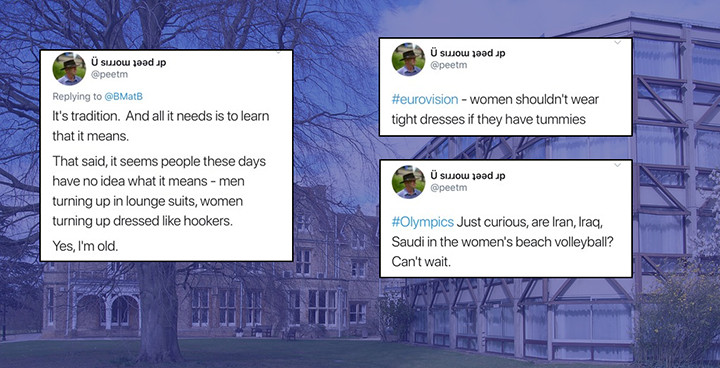 Dr Peet Morris, a contracted worker at Oxford University, who holds a doctorate in statistic, has publicly tweeted demeaning comments about women.

These include claims that women at black tie events are increasingly “turning up dressed   like hookers”. He has also tweeted that “women shouldn’t wear tight dresses if they have tummies”.

As well as this, Dr Morris tweeted “#Olympics Just curious, are Iran, Iraq, Saudi in the women’s volleyball?  Can’t wait.” and referred to trans people as “the genders of flake”.

He justified some of these claims by saying “Yes, I’m old”, and when discussing sexism questioned “what about us […] men, and how we feel? As a man I certainly feel an ever increasing level of misandry and sexism against me.”

Dr Peet Morris describes himself as an Oxford academic, however, a spokesperson for Oxford University said: “We have been made aware of allegations on social media, which we understand relate to a conversation at a private event unconnected to the University.

Peet Morris is not an Oxford University or college academic. He holds a casual contract for services, delivering computer programming training with the IT Services department on an ad hoc basis, normally two to three days a term.

They added: “Under our equality policy, the University of Oxford is committed to fostering an inclusive culture which promotes equality, values diversity and maintains an environment in which the rights and dignity of all are respected. The University embraces diversity amongst its members and constantly seeks to promote awareness of equality and foster good practice. All members of the University community are expected to act in accordance with this policy and its values.”

However, The Oxford Student can officially reveal that an archived official website from St Hilda’s College has been found which lists Dr Morris as a “college lecturer”. However, he is not listed as a college academic within different pages of the St Hilda’s archived website.

In response to this, St Hilda’s said: “this person is not an employee of the College and has never taught our students.

“Our tutorial teaching records are retained in perpetuity as part of College archives (and since 2005 electronically via OxCort), and I can find no evidence of this person teaching St Hilda’s students.

“Unfortunately my records cannot explain the discrepancy between the teaching reports and this webpage.”

He has also been referred to as an Oxford academic and lecturer on several websites and by online publications.

More recently, Dr Morris was allegedly involved in a racist incident in which he told Aisha Ali Kahn, a Muslim, activist, and campaigner, to “go back home”.

The incident occurred at a private meal which was attended by around 100 people, during a conversation on politics which allegedly descended into a “racist rant” about Sharia Law and whether women should wear the Burka.

Ms Ali Kahn said that she believes she may have been the only BME person at the dinner, and that Dr Morris became increasingly loud until the point where many people could hear the conversation from other tables.

She added that his wife, Dr Harriet Dunbar Morris, had been sat by him, but did not interfere in the incident, except to tell him that he needed to quieten down as the Dr Morris started to raise his voice.

Dr Morris has also allegedly claimed that Boris Johnson was right about his comment about Muslim women looking “like letterboxes” when wearing a Burka.

Ms Ali-Kahn made an official complaint to the university, to which the university responded: “The University is committed to fostering an inclusive culture which promotes equality, values diversity and maintains a working, learning and social environment in which the rights and dignity of all its staff are respected, so we appreciate you taking the time to bring your concerns to our attention.

“Having reviewed the details you provided, the incident occurred at a private event and involved someone who is not an Oxford member of staff, academic, or researcher.

“In light of that information, our policies and processes do not apply in this instance, and it is therefore not something which we are able to investigate.”