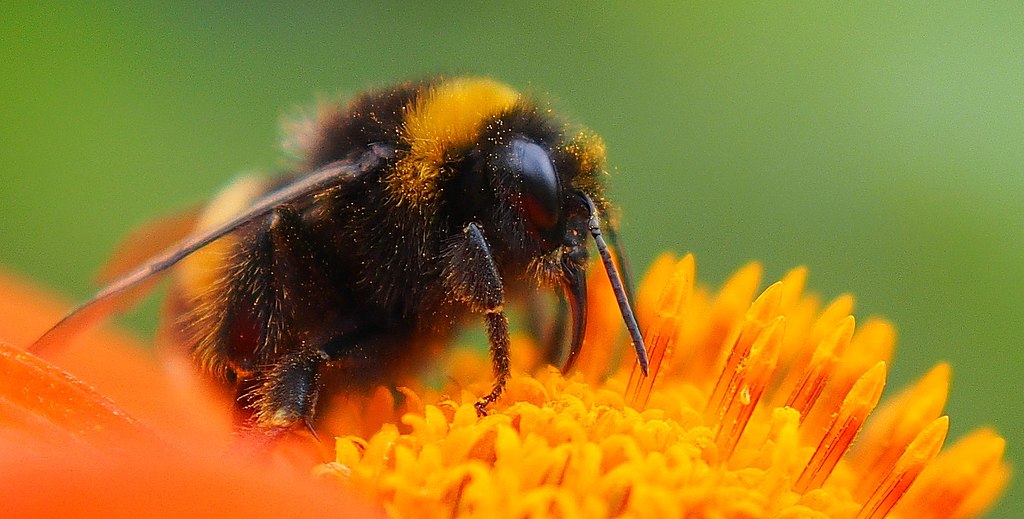 Image Description: a bumblebee on an orange flower.

1. Bees have hairy tongues for drinking nectar. Bumblebees are able to drink both runny nectars and gloopy nectars. How they are able to do this has baffled scientists – until now. Bees have long, rod-like tongues covered in hair-like protrusions, best described as a tiny mop. This also allows bees to lap up nectar at the same rate, regardless of nectar viscosity, meaning the same volume of nectar is taken up each time their tongue is dipped into nectar. This finding came as a surprise to the researchers at the University of Mons, Belgium, as thicker liquids are theoretically more likely to adhere to an object dipped into them. But because the hairs are close enough together, liquid is pulled between them via capillary action, and held there.

2.Breakthroughs in the fights against Polio and Ebola. Polio virus has been eradicated in Nigeria. No cases have been reported to the World Health Organisation (WHO) for three years. Meanwhile, a clinical trial in the Democratic Republic of the Congo has shown that a new drug, REGN-EB3, was 94% effective at treating Ebola, in a test of 700 recently infected patients. The drug is a monoclonal antibody, which acts by binding to and interfering with the virus.

3. Black hole eats a neutron star. Physicists have detected an event roughly 900 million years ago, when a black hole and a neutron star collided. The collision sent shockwaves through space-time, which washed over Earth in August. These waves were detected by the Laser Interferometer Gravitational-Wave Observatory (LIGO) detectors in Italy and the US. Once confirmed, this observation would complete the trio of cataclysmic events that researchers aimed to detect with LIGO – the others being the collision of two black holes, and the collision of neutron stars in a binary system.

4. Tiny magnets dissolve microplastics. Thousands of magnetic coils alongside peroxymonosulfate ions break down microplastics into carbon dioxide and water. Contaminated water is heated to 120°C, and a reaction between the metal and ions creates radicals, which break down the plastics. The coils can be removed from the water using a large magnet. It is hoped this process could be used in water treatment plants, to prevent further microplastics entering the oceans, although is does generate carbon dioxide.

5. Human origins. Dense, bony growths in the ear canals of people who spend a lot of time in cold, wet and windy places (known today as “surfers’ ear”) were common among Neanderthals. This indicates that aquatic foraging was common, thus provides further evidence of Neanderthals’ complex and varied lifestyle. The growths were found in around half of the Neanderthal remains studied, which is over twice as frequent as in other ancient humans. Similarly, two hominin skulls found in a cave in southern Greece show that Homo sapiens had reached Europe over 210,000 years ago, which is much earlier than previously thought. In more recent human history, it has been discovered that Vikings are not solely from Scandinavia. A large-scale study of ancient DNA suggests that Vikings migrated from modern-day Germany, via Denmark and Sweden, to the rest of Scandinavia, possibly due to displacement by Huns. In addition, archaeological finds suggest that Vikings lived in more advanced societies than previously believed, with complex trade, diverse populations, and centralised organisation.

6. Facebook data collection puts LGBTQ+ people at risk. LGBTQ+ people living in countries where homosexuality is illegal are put at risk by Facebook’s advertising practices, which targets adverts based on interests, including sexual ones. So far, Facebook has labelled 4.2 million people living in countries where homosexuality is lillegal as having an interest in homosexuality. Of these, 940,000 are in Saudia Arabia, where homosexuality is a capital offense. This information could be used to target seemingly innocuous ads towards members of the LGBTQ+ community, which then collect identifying information for third-parties, such as the government or anti-LGBTQ+ groups. This goes against GDPR law in the EU, but similar legislation does not exist elsewhere.

7. Goliath frogs can move 2 kilogram rocks. Goliath frogs, the world’s largest species of frog, move large rocks to build nests, and have evolved their large size to do this. They can reach 34 cm in length, and weigh up to 3.2 kg, and build nests that are small pools within streams.

9. Milky Way black hole suddenly bright. The supermassive black hole Sagittarius A* in the Milky Way galaxy is flashing brighter than ever seen. Over a period of two hours, its brightness increased 75-fold. The illumination is due to the black hole heating the dust and gas around it.

10. Bionic eye allows people with blindness to read again. The trial of a new bionic eye has been successful in people with macular degeneration. The five participants with were all able to read individual letters again. The bionic eye consists of microchip implanted behind the damaged retina, and  glasses with an embedded camera.