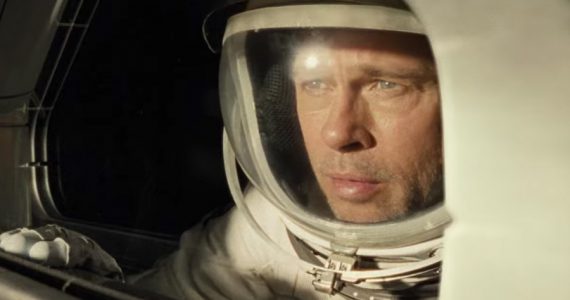 Brad Pitt is having a bit of a moment in 2019. Following on from his star turn in one of the other biggest films of the year, Once Upon a Time in Hollywood, he now carries the much-hyped Ad Astra on his hunky shoulders. Both performances are studies in restraint, portraying capable yet closed-off professional men. In Once Upon a Time in Hollywood, the mask of easy masculine capability covers a nasty streak always threatening to boil over. In Ad Astra, it hides a chilly core of grief.

Initial reviews of Ad Astra, burdened it with words like ‘philosophical’ and ‘profound’ which might stop many people from going to watch it. It’s worth seeing for Pitt’s fine central performance as Major Roy McBride, the son of the legendary Clifford McBride. Thirty years prior to the events of the film, McBride Sr. led the first human voyage into deep space around Neptune, but his ship and crew were never heard from again. Now a mysterious power surge threatens all human life— no prizes for guessing where it comes from— and the lovable and not at all shady American government decides that Major McBride is their best chance of drawing his father out of hiding.

Even this brief synopsis conveys something of a tonal inconsistency in Ad Astra. Indeed, in a film so devoted to its own seriousness, there are some hokey plot elements. When Pitt stops off on the moon he’s told to deal with some random space pirates while he’s in the area. Why would they ask him when his mission is far more important? Later on in another tangent, a ‘research primate’ (aka a crazy monkey) arrives to cause problems. Though I was almost won over by the camerawork which makes these scenes look more like fever dreams than action sequences, these plot elements seem to be drawn from a different film.

However, the film is anchored by its central focus on fathers and sons. The absence of his father has devastated Pitt’s character. Not every man who abandons his wife and kid is so exactingly thorough. In anything but a sci-fi film 2.7 billion miles would be enough to prevent any unwanted contact. McBride Sr. is lucky his son only comes calling for answers and not guilt money too. Not only is this particular father the son’s image of what a man should be, he is also the world’s image of what a human could be. Countless fellow astronauts tell Pitt that his father was their inspiration. On the surface, Major McBride’s father seems like the embodiment of the American dream. But his is revealed to be a pleasant fantasy, fabricated to cover up something more unsettling. The film deftly establishes how this central bond of family is charged with both admiration and pain.

Pitt portrays a man who can achieve anything in life but cannot control how he feels while doing so.

In a stand out scene Pitt is asked to record a message to send to his father’s vessel. He doesn’t start crying as much as his face starts to tremble, the muscles behind the eyes twitching and spasming. The doors that lock away all that inner space threaten to burst open. So much of the film situates Pitt in enclosed spaces: space shuttles, an awful ‘comfort room’ designed to calm the mind, the space suit itself. He is often framed in squares and rectangles. In this scene the director suggests that the self Pitt has created is another prison. This is all the more poignant since all these enclosures are but one step removed from the limitless potential of space. Pitt portrays a man who can achieve anything in life but cannot control how he feels while doing so.

Indeed, the film works best when it’s considered as the story of someone suffering from a mental illness. One reason for McBride’s success is his heart rate which never climbs above 80, even while falling from a space station. At first he seems closer to superman than man. But hints to the contrary pile up through repeated psych evaluations and the ‘stabiliser’ pills all the astronauts must take. As McBride’s mission plays out the camerawork gets woozier, the cuts between takes choppier. The viewer starts to feel like they are witnessing a breakdown.

Despite all this, the one element I disliked was the fact that much of Pitt’s dialogue in the film comes in the form of a voiceover which is too often plodding and vague. The archetypal elements sometimes come across as hackneyed. Pitt’s acting suggests an inner struggle that’s intensely individual; to me there was no need to explain and sometimes diminish his performance with words.

The viewer starts to feel like they are witnessing a breakdown.

Pitt is supported by some fine character acting. Donald Sutherland, his face more cracked and cratered than the lunar surface itself, adds gravitas to the world of zero-gravity. I would’ve liked to see more of Ruth Negga trying to process her own messed up familial history on an underground Mars base. Tommy Lee Jones’ character Clifford McBride was based on Marlon Brando’s Kurtz in Apocalypse Now, who appeared only very late in that film’s run time and whose face was almost always semi-submerged in darkness. For a long time all we see of Jones is a flickering recorded image on a screen held by Pitt. In the digital age fuzzy pixels replace the shadows of the jungle and contain the same sense of menace. When Jones appears in person he delivers an effective performance, hints of megalomania not belying the fact that he is a human being.

Though it’s often excellent, I was not entirely satisfied by Ad Astra, in part because it takes itself too seriously. One of its main inspirations, Apocalypse Now, made room for bursts of black comedy amidst the bleakness of its subject matter. In doing so it managed to capture more of the human experience. But then the awfulness of depression is how many layers of the human experience seem locked out of the cold, dark tunnel. Though not a masterpiece, Ad Astra is a fascinating and emotional portrait of male mental illness.