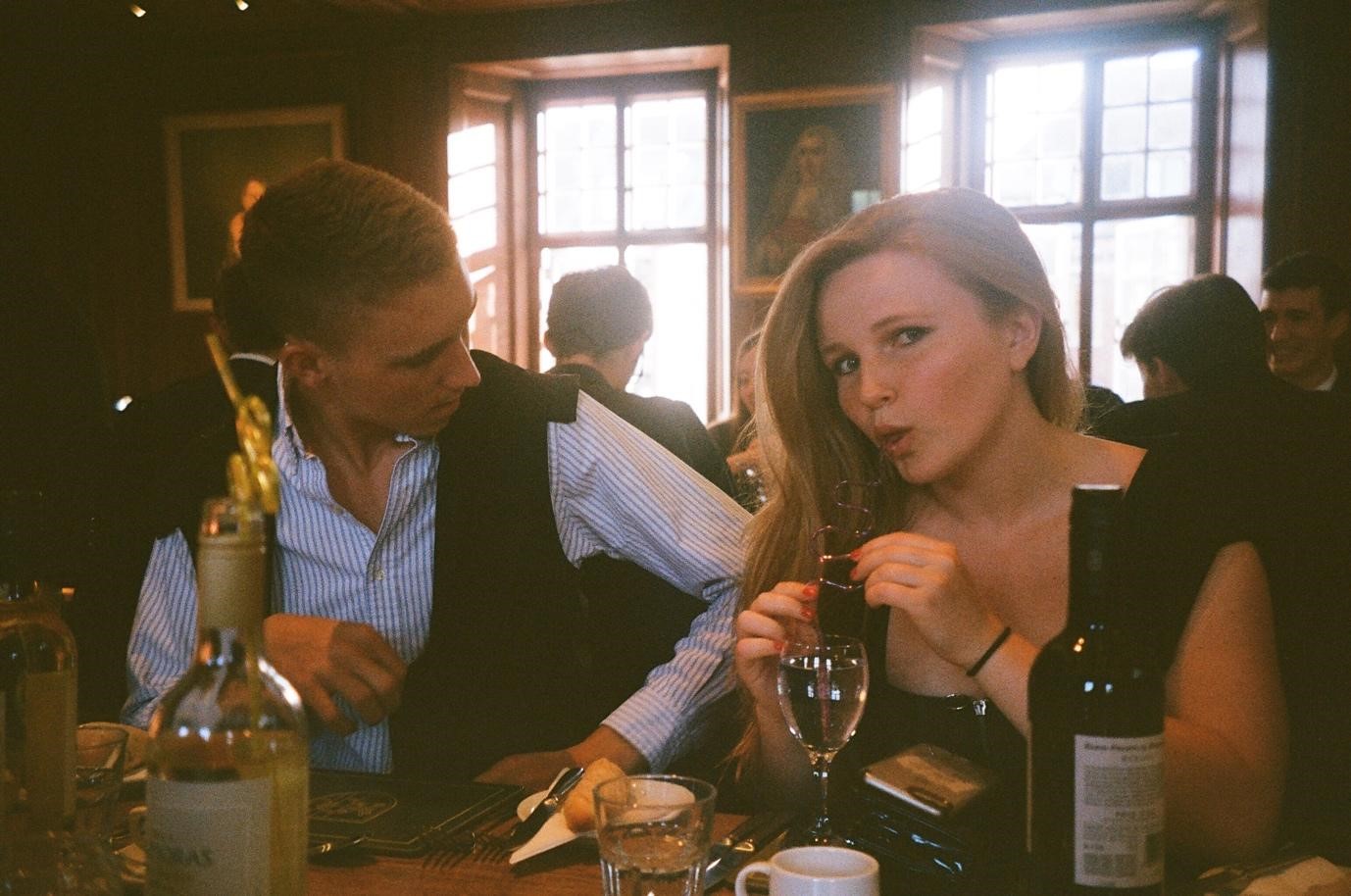 Film photography and the art in student life

During my first year of university, I noticed a curious trend appear among several students: film cameras had become an accessory to anything interesting occurring in uni life, anything from cheap disposables to the vintage professionals. The accessibility of mobile phones should make film cameras seem clumsy and expensive, and yet here they are at almost every formal hall, trashing, or other similar event. Having a limit of either twenty-four or thirty-six photos, each image must be used well and wasted shots are costly (a disposable may set you back £10, plus development costs). Especially in the chaos of a night out, a film camera seems clumsy compared to a phones near unlimited use, and yet if you pay attention you will notice one appear for moments on the floors of nightclubs or in the bars of colleges. Is it that the lower floor of Park End is just an aesthetic space, or could it be that there is art in the student life itself?

Art is made not simply from the aesthetic, but also the meaningful. When asked about whether he finds more attachment towards his film photos than any other, Tom Davidson (St Peter’s College) said “I try to take photos without telling people, so they’re fairly candid… those are the ones I share the most”. By allowing himself only one roll of film a term, every image is worth more.

Film cameras had become an accessory to anything interesting occurring in uni life.

A phone may take hundreds of photos of a single event, but with a film camera what remains are one or two images containing within them entire collections of memories and emotions. Indeed, the attraction of the current university generation to film photography may be, at its roots, a question of memories. We are the last generation to have our childhoods captured on film and saved in print. It was a period when entire swathes of our lives could be shown through single pictures. Is the resurgence of film cameras as tools for capturing daily life an indication of nostalgia for a time when our lives were treasured in fewer captured moments? In choosing this medium to capture the enormity of student life, we are choosing to collate all the things we may do into one tangible, meaningful photograph.

With a film camera, what remains are one or two images containing within them entire collections of memories and emotions.

Film is no longer the standard format of the day, it is clumsy and often expensive and sometimes you might find yourself left with no photos at all. And yet, it has a quality that can’t be summarised in any one way. For some it is about the looks, the grain that can’t be replicated with digital, the colours, light leaks, or the quality of vintage lenses. For others, it is the surprise of not quite knowing what you will get when you open the envelope of prints or view the digital scans.

There is also something to be said about the aesthetics of film photography. While the disposable kind is by no means a professional tool, there is a spontaneity with its use. An anticipation builds before the film is developed where you are left wondering if certain photos are going to come out well, whether light leaks will add to the look or ruin it completely. There is also a naturalness to it, the sense that every photo taken is as things were in that precise moment. There is no chance to delete it and try again because the photograph will not be seen until long after the event. For better or worse, what was taken is what you are stuck with.

“You can’t really pose for film. An iPhone could take 500 iterations of the same photo, but film always feels like a one-time thing, one memory” says Iman Faruki, a student known for providing the whole JCR with profile pictures shot on film.

For better or worse, what was taken is what you are stuck with.

Film has a rawness to it, a sense that the photos are life as it’s happening, with all the grain and beauty that film allows. I believe there is art in student life, but it is an art that goes unnoticed in other formats.

For one reason or another, people seem to be more relaxed around a film camera – they pose less, and life is more candid. No doubt, if someone tries hard enough, they can capture art with any tool, but scroll Facebook or Instagram and you will notice that the most artistic, the most shared, the most kept, are ones taken on film.