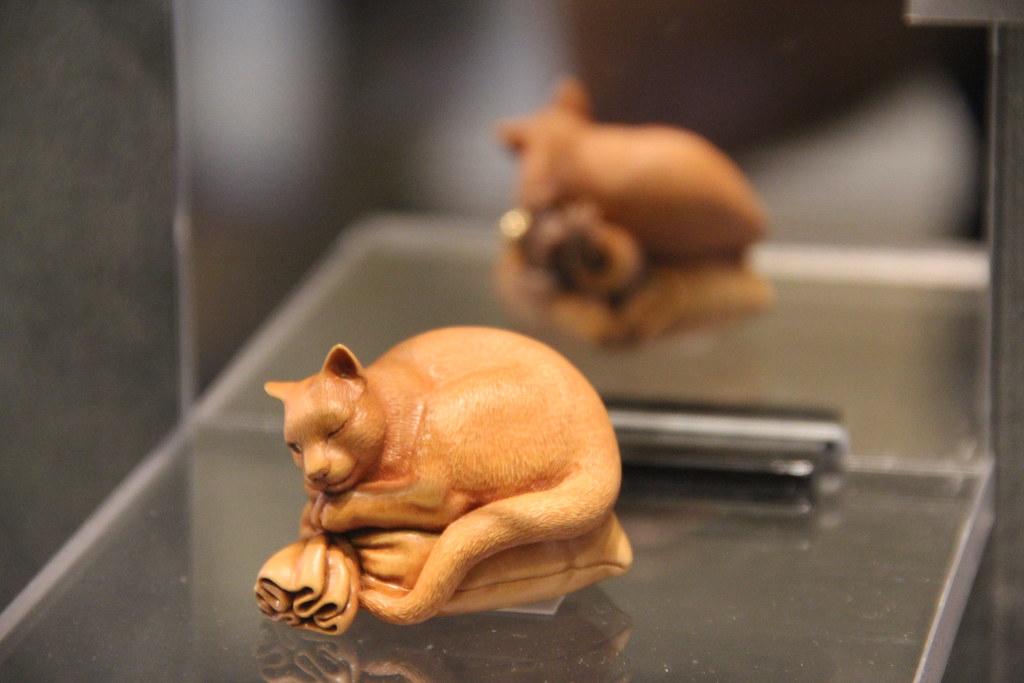 ‘The Hare with Amber Eyes’ by Edmund de Waal

I picked up this book expecting to learn a lot about netsuke, the 264 tiny Japanese sculptures that ceramicist Edmund De Waal inherited from his beloved uncle Ignace, known fondly as Iggie. Netsuke are little ornaments, usually ivory or wood, that were worn from the belt as part of traditional Japanese dress. During the craze for all things Japanese in the mid-19th century, they came to Europe in their thousands. To Westerners, they epitomised their conception of Japanese culture as childlike and innocent: they are miniature, quirky, often comical. Nowadays we might describe them as cute. Here in Oxford, you can see rows and rows of them in the Pitt Rivers Museum; a city of beasts and humans in miniature. They invite touch, and long to be held. Their irresistible tactility is a thread running through the book. De Waal beautifully describes picking them up as “a moment of seduction, an encounter between a hand and an object that is electric.”

However, this book isn’t about netsuke as an art form but about this specific set of 264 netsuke, and their extraordinary afterlife. The subheading for the book is ‘a Hidden Inheritance’: in inheriting the objects, De Waal also inherited a history that he felt compelled to uncover. There is a great value placed on the artistic quality of the netsuke, but what really matters here is human stories that took shape around them. They are carriers of history, and a means for us to connect to an intensely personal story.

This book unfolds like a novel: we begin in the opulent Parisian household of Charles Ephrussi, a cousin of De Waal’s great- grandfather. Charles is a young Jewish art collector who is “much, much too rich for his own good”. When the Japanese craze hits Paris he (like so many) falls in love with the sensuous and exciting possibilities of a brand-new art. Along with lacquer boxes, woodblock prints and tea bowls, he discovers netsuke, and they find an honoured place in his home. From Paris we move to fin-de-siècle Vienna, where the netsuke were given by Charles as a wedding gift to his cousin Viktor and his bride Emmy. We have even more opulence: a house “too big to absorb” with rooms “covered in gold”. Viktor’s children grow up playing with the netsuke in Emmy’s dressing room, while outside demonstrations against the Jews become commonplace and the First World War turns the city “convulsive, noisy, hectoring”. The children grow up and leave Vienna; Iggie, the youngest son, moves to the States. Viktor and Emmy are faced with the rise of Nazism, and the beginnings of the Holocaust. The Nazis take away their art collection; the netsuke survive only because the maid stows them in her apron, takes them to her room and hides them in her mattress. After the war, when 65,459 Austrian Jews had been killed, the netsuke end up in England with Elisabeth, the daughter who played with them as a child. She gives them to her brother Iggie, who takes them back to Japan.

In inheriting the objects, De Waal also inherited a history that he felt compelled to uncover.

This is a dramatic and immensely powerful family history, enriched by culture and traumatised by war and persecution. De Waal is a sensitive and vibrant literary voice: we feel the pace and the high emotion of the story, but also the slow process of intense archival research. He does not so much tell us his family story, but lives through it with us, because we share in his revelations. It feels like the hidden inheritance is being gradually uncovered, as if it were an archaeological excavation.

Why use netsuke to tell this story? Rachel Cooke, in her review of ‘The Hare with Amber Eyes’ in the Guardian, thinks “they
are more distraction than narrative thread and the need to return to them often bogs the author down”. For me, this was
not the case, because it is their continual presence that sews the narrative together. We can often think of history as compartmentalised into neat periods and locations: 19th century Paris, fin-de-siècle Austria, First World War, Second World War, Japan in the 1970’s. But the netsuke’s omnipresence reminds us that the glamourous world of Charles Ephrussi is not so far off the trauma of the Holocaust; they link a traditional Japanese art form with Austrian politics, and the quiet respectability post-war Tunbridge Wells. They add a deeper meaning to the story by uniting the various human stories into one ‘object history’.

Too often our understanding of art is focussed on the creation and the creator. We root an object in the context of its making, and usually this involves obsessing over authorship. De Waal, himself an artist, shows how the moment of creation is often just the beginning of a bigger story. Art does not exist in stasis; it is not a fossil. It is woven into everyday life, and into an unfolding history. Its meaning comes from not just the person who made it, but those who experienced it.

The history of art is not just the history of creating, but of treasuring, possessing, displaying, showing off, hiding, moving, breaking, destroying and rediscovering.

I went to see De Waal talk at St Peter’s here in Oxford earlier this year and it struck me how he applies this concept to his own art. He said that he accepts that once his pots leave his studio, their lives are out of his control and take on an agency of their own. He knows that some of his pots will break, and he embraces this.

The history of art is not just the history of creating, but of treasuring, possessing, displaying, showing off, hiding, moving, breaking, destroying and rediscovering. Unlike history, art history does not have a beginning or an end, because objects outlive events. The beauty of this book is they way it interlaces material culture with lived human experience, how it unites art with history. The netsuke are not a distraction but crucial to De Waal’s idea that art is more than just something in the background of history – it is woven into it.