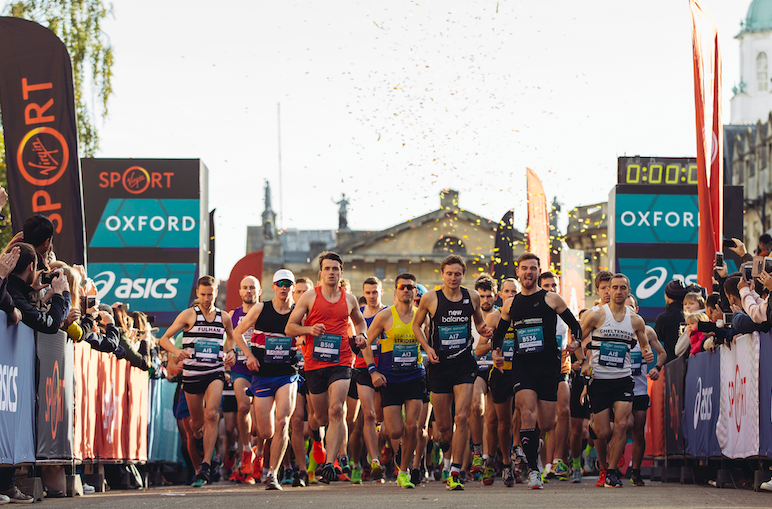 This weekend saw around 10,000 runners facing the elements for the annual Oxford Half marathon.

The race, which is in its 9th year running, saw the highest amount of charity fundraising of any previous Oxford Half, with at least 2,000 people taking part in the half marathon through a charity place.

The racing scene this weekend has been dominated by record breaking marathons, but the Oxford Half can be proud of its own humble records. One of these comes from the race organiser, Virgin’s, announcement that they will go plastic free.

This aim was a success as the Oxford Half became the largest Half Marathon outside of London to go plastic free. They did this by having water served in 100% recyclable cups along the race route and by providing JUST Water cartons at the race finish. It is estimated that this eliminated around 65,000 single-use plastic bottles.

With plastics ditched, shoe laces tied, and competitors at the start line, the Oxford Half was ago. People of course kept up the tradition of running the race in strange outfits, with one person crossing the finish line as a submarine in aid of a local charity, Yellow Submarines.

The route this year started and finished in Oxford City Centre, passing some of the city’s landmarks including museums, colleges, and University Parks. The race also went more out of town, going out to Old Marston Village and across the River Cherwell.

One of the highlights of the course was along Parks Road, where supporters lined up to cheer rain-soaked runners on. The race was particularly successful for Oxford University Athletics Club, who won the team prize for the half marathon. Alexander Betts ran the fastest time for University Club, of 1 hour, 13 minutes.

Commenting on his win, Alex Milne said: “I finished second here twice before so really pleased to come back and get the win! It’s a great course. Amazing for PB’s. I’ve run a personal best on this route twice now.”

Stephanie Davies was also thrilled with her win, saying: “Thank you to everyone that came to support us, it was a huge boost especially in this weather.”

Commenting on the event, the organisers said: “A big round of applause to everyone that got their sweat on and made it another unforgettable Oxford Half marathon. “Thank you to every runner; from the first-timers to the familiar faces, to the volunteers and to those that love to get their maracas out to show support and bring the noise!”

The race overall was a huge success and showcased some of the best running Oxford has to offer.

Image credit: The Start of the Oxford Half Marathon – Virgin Sport