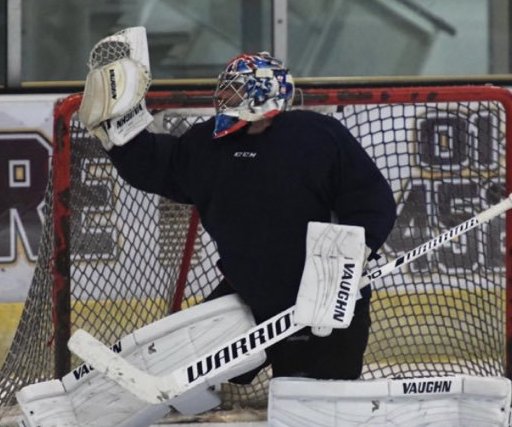 Petr Cech, the former Chelsea and Arsenal goalkeeper, made his ice hockey debut after having signed for fourth-tier British team Guildford Phoenix.

The former Czech Republic international was showered with praise after having saved two penalties in a shootout, following a 2-2 draw forcing the game to go into overtime.

Named man of the match, Cech said after the game “I wanted to win, that was the main thing, and I’m glad we did.”

Cech made the decision to switch to the ice rink last Wednesday, citing his great admiration for the sport since childhood. “I wanted to play ice hockey over football, but we couldn’t afford all the gear. So, in the end my parents took me to football.”

Cech is no stranger to penalty shootouts, having been the hero of the 2012 Champions League Final for Chelsea, saving two penalties to help his team come back from 3-1 down in the shootout.

On his helmet Cech paid homage to both Chelsea and Arsenal as well as a picture of the former Czech goaltender Dominik Hasek. As well as now being a goalkeeper for Guildford Phoenix, Cech returned to Chelsea this summer as a technical advisor, supporting former team-mate Frank Lampard with the running of the club.

His role at the club is reported to have him work with a variety of coaching as well as backroom staff with a particular focus ‘on strategy and performance’.

Speaking on his Instagram account he addressed those who criticised him for the additional commitment: “Some people seem to think I changed my job. No I didn’t. Luckily my job as the Technical and Performance adviser at Chelsea FC doesn’t stop me in my spare time from playing the game I loved as a kid and which I’ve been playing for years. While being professional footballer I couldn’t play the games for obvious reason … now I can.”

The four-time Premier League winner is speaking at the Oxford Union on the 14th October in what promises to be an interesting talk from a very illustrious sportsman.

Cech currently holds the record for the greatest number of clean sheets in the Premier League as well as being the most ever capped Czech Republic player in their history. What is certain is, his career in sports is far from over, despite having retired earlier this year.