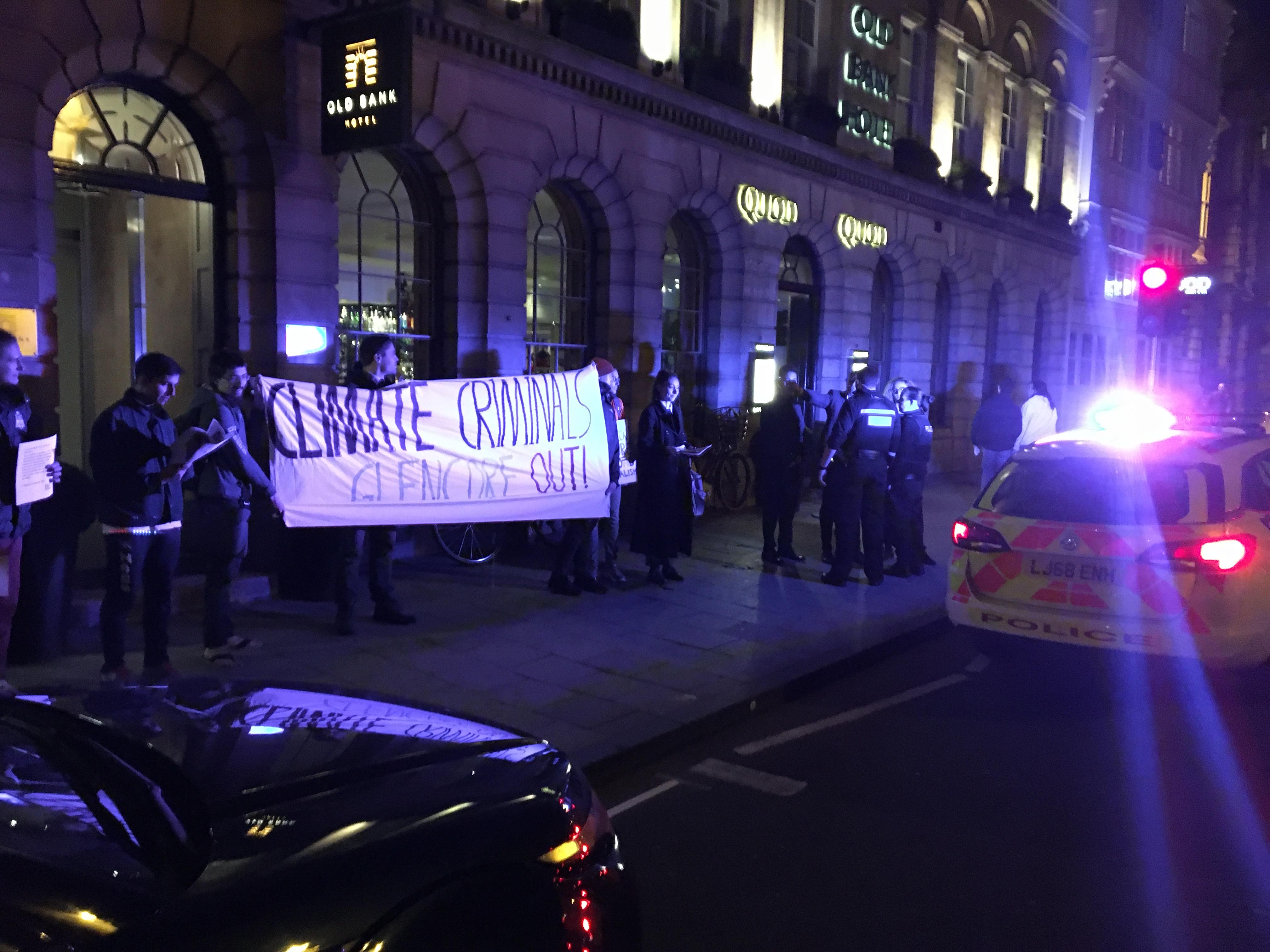 Image description: scenes from the protest on Monday evening

The official event, organised and advertised by the University careers service, was seeking to recruit students for the oil business’ graduate programme, and was held at the Old Bank Hotel on the High Street. The website highlighted that students could “discover the opportunities Glencore can offer you in the oil and energy industry.”

The Climate Justice Campaign then pulled together the protest with just 24 hours’ notice, having seen the event on CareerConnect. According to the campaign’s press release, around fifteen students and Oxford residents descended on the recruitment event. According to Climate Justice Campaign spokesperson, Fergus Green, “Around 500 members of the public were leafletted and many hundreds more saw our huge ‘CLIMATE CRIMINALS: GLENCORE OUT’ banner. Attendants had engaging and supportive conversations with students, local residents, hotel and restaurant guests, and even those who had come with the original intention of attending the event.”

Glencore staff, The Old Bank Hotel and the police all attempted to move protestors, who were blocking the entrance to the event, forcing participants to walk through the busy restaurant via another entrance. The restaurant entrance was then leafletted by protestors seeking to discourage attendance at the event and spread awareness of Glencore’s history of human rights abuses.

The press release stressed the controversial nature of Glencore, who are the world’s biggest exporter of thermal coal, market oil, metals and minerals. They have been ‘embroiled in a litany of environmental and social scandals’. Recently, Guardian Australia revealed that the group spent millions on a social media astroturfing campaign pushing a pro-coal agenda, despite being under investigation by US courts for money laundering in the DRC. There have also been allegations of child labour and dumping of hazardous raw acid.

Jay Clarke, the co-director at People & Planet, a student campaigning charity, said: “The most concerning thing about this event is that Oxford Careers Service, and therefore the University of Oxford, is officially endorsing and promoting careers in climate-destroying fossil fuel companies. These recruitment events lend legitimacy to the notion that companies that are key drivers of the climate crisis, like Glencore, have any place in a sustainable and just future, something that is totally false.

As an institution of knowledge and learning, the University of Oxford has a responsibility to act on the evidence and scientific consensus, and screen climate destroyers like Glencore from its recruitment opportunities.”

Oxford University Climate Justice Campaign will continue to mobilise around both university and college divestment from fossil fuels over the term. They meet on Wednesday evenings at 6:00pm, with details available on their Facebook page.