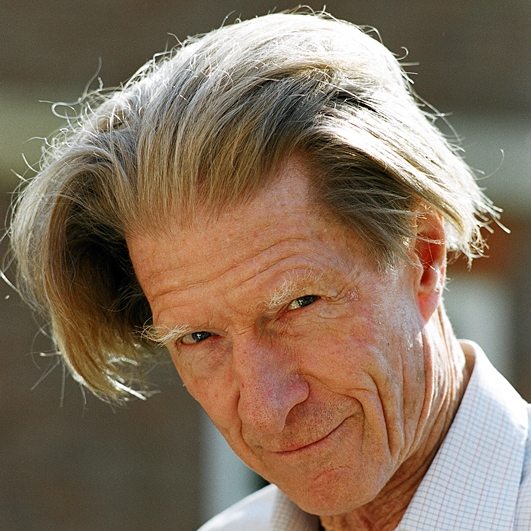 On Friday evening, Prof. Sir John Gurdon was invited to give a talk by the Oxford University Biological Society. His talk, titled ‘Over 60 years at the bench, and still there’ was a modest and candid account of his science career, from anecdotes about his school days, through to his current activities.

His talk gave a refreshing account of the numerous setbacks in his early science career. Age 15, his Biology teacher wrote in his school report “I believe he has ideas about becoming a scientist; on his present showing, this is quite ridiculous […] and it would be sheer waste of time, both on his part, and of those who have to teach him.” He was ranked 250th of 250 in his year group for Biology (albeit at Eton College), and removed from Science classes, forced to study Ancient Greek instead, and punished with one semester of silence.

And yet he made it to Christ Church College, Oxford, transferring from Classics to Zoology. His advice: “if you start badly, you don’t give up.”

He completed his PhD at Oxford, supervised by Michael Fischberg, on the question ‘do all cells in the body have the same sets of genes,’ which was not known at the time. He tested this through nuclear transplant experiments, where he removed skin cell nuclei and inserted them into egg cells using a specially-designed needle. In 1958, he cloned the first adult vertebrate, a toad. The same technique was later used in 1997 to clone Dolly the Sheep.

A modest and candid account of his science career, from anecdotes about his school days, through to his current activities

But he encountered a number of technical obstacles. Firstly, he needed a marker to ensure that the inserted nuclei was from the target cell, rather than having simply failed to remove the original cell nuclei. A fellow lab member coincidently discovered a mutant with only one nucleolus, different from two nucleoli in the wild type. A second challenge was the impenetrable jelly that surrounds toad eggs. It is so elastic that a conventional needle simply pushes the jelly through the other side of egg, without capturing the nucleus. Gurdon had to design and make his own needle, as “back then, you couldn’t buy the equipment, you had to make it.” The needle was sharpened by a microforge to allow it to pierce the jelly, and had a hole in the centre to suck the nucleus into. Even after this, his experiments “initially completely failed” before eventually succeeding.

As well as his honest about the ups and downs of research, Gurdon also acknowledged the role of luck in shaping your science career, saying “ I was lucky to get results early in my PhD, which led to the recognition and good fortunes that have come my way.” In 2012, he was jointly awarded the Nobel Prize for Physiology or Medicine with Shinya Yamanaka, for ‘for the discovery that mature cells can be reprogrammed to become pluripotent.’ The transplanted the nuclei of differentiated (i.e. specialist) cells from the intestinal tract of tadpoles into donor eggs whose chromosomes had been killed by UV light, and these developed into a normal frog, yet was derived from an intestinal cell. Demethylation of histones enables cells to forget their specialisation, hence allowing them to develop as well as those without memory. This showed that nearly all cells in the body have a complete genome.

He spoke passionately about his current research and its clinical prospects. Macular degeneration causes, firstly, macular dysfunction, resulting in loss of the central field of vision, followed by loss of peripheral vision. The death of retinal pigment epithelial cells (RPE) causes the subsequent death of rods and cones. Researchers have created and implanted RPE cells into patients with macular degeneration, resulting in successful treatment. This treatment is especially promising, as only 50,000 cells are required, compared to a total of 1013 cells in the human body. But this treatment is yet to be approved by regulatory bodies, and is facing difficulties due to legal obstacles.

“I was lucky to get results early in my PhD, which led to the recognition and good fortunes that have come my way.”

Gurdon concluded his talk with a summary of how “life for the benchworker” has changed over his 64 year career. He praised advances in scientific technology, especially DNA and RNA sequences, and the numerous health developments that science has provided. He commented that while jobs in tenure are decreasing, more are available in industry. He, however, criticised publishing, arguing that the current peer review system creates too many obstacles, and every time finding needs statistical support. His greatest criticism was of administration, of which he said “too many people, too many rules” and disparaged his recent experience of being made to fill in a 40 page form and complete an examination to renew his license for a technique he has been using for 60 years now.

His concluding thoughts capture his continued passion for research and down-to-earth nature. He quoted Confucious “choose a job you love, and you will never have to work a day in your life” and said “I feel very lucky to be in that position.”