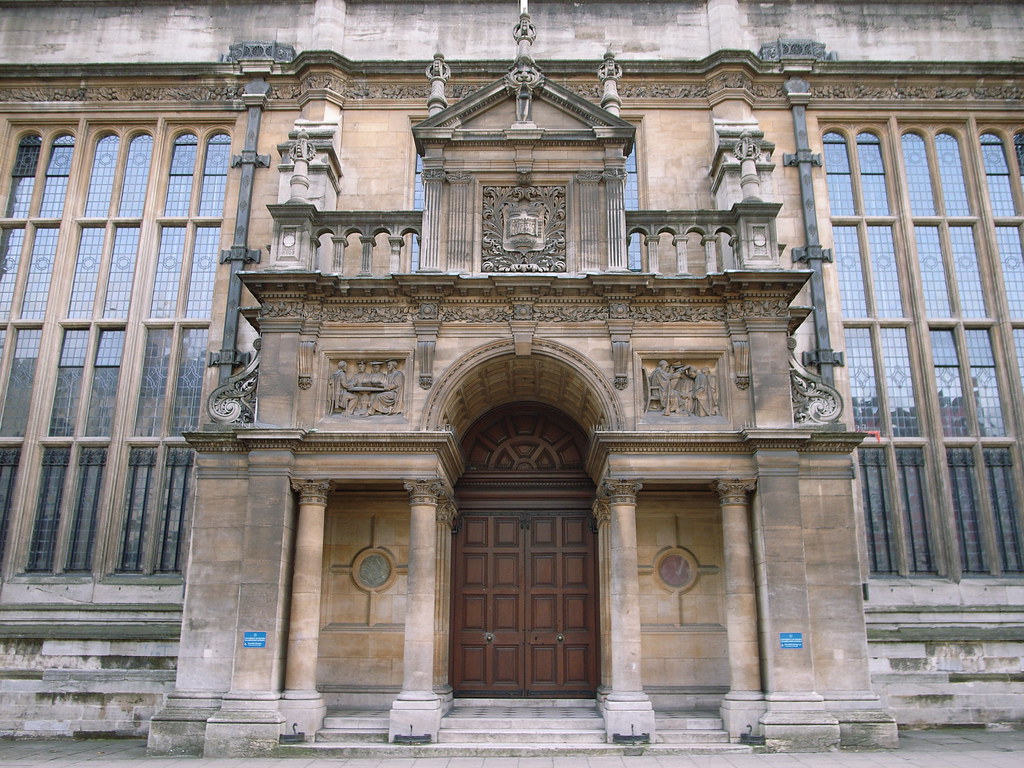 Image description: a photo of the entrance to Examination Schools, with the doors closed.

Last Friday saw A Woman’s Place UK (WPUK) holding an event within Oxford. Their presence was not just in the city, but in the university. Specifically, in Examination Schools.

And last Friday, WPUK were hosted there. When I saw this, I honestly felt like the air had been taken out of my lungs. It felt like a betrayal, though it seems foolish to me to feel that way. I knew, of course, that the University at large cares very little for the feelings of a single undergraduate in their second year. I’m a middle of the road, unremarkable student who doesn’t really fit or buck any particular Oxford stereotypes.

I knew that the University didn’t care much about me. I didn’t expect, however, that they would so shamelessly host a group like WPUK, who believe that trans women should not be welcome in spaces for women. I also didn’t expect that they would provide security for an event that wasn’t even protested at the venue, let alone threatened.

Oxford does very little to make transgender students feel welcome, at least in my experience. My college doesn’t hold equality workshops in fresher’s week, and on our accommodation form you are assigned a preference for who you might share a bathroom with by selecting whether you’re male or female. No third option to speak of, and no guideline given on what they would expect a trans student to select (the answer to this question, which I obtained after outing myself to two members of staff via email, was that I should pick whatever I felt most comfortable with. Small mercies, I suppose).

Oxford does very little to make transgender students feel welcome, at least in my experience.

On top of that, everything that comes from the university (my email address, my Bod card, all my exam information) has my deadname on, and I have no way of changing which things display which name, meaning that I’ve nearly been outed to my family more than once by things I’ve been given no control over.

Is there something I can do about all of this? Yes, if I have the energy and time to put into chasing up loose ends, fighting for things I’m entitled to, having awkward conversation after awkward conversation about why this thing or that thing needs to be different. But that doesn’t mean it isn’t glaringly obvious that this system was not designed for people like me. My college was not prepared for someone like me.

It’s not anyone’s fault in particular that I often feel unwelcome at Oxford. It’s more of a cumulative effect, really. One person forgets about trans people in my department, one or two in my college. Little things fall through the gaps in a procedure that probably doesn’t consult any transgender people, and people like me are left with the unmistakable feeling that they don’t belong.

In that sense, WPUK coming to Oxford is just one thing on top of so many tiny little things. A reminder, splashed all over the cover of student newspapers, that there are so many people who think I’m illogical, or deluded, or have a deep internalised misogyny I refuse to recognise.

It’s a reminder that hurts. Reminders of transphobia in Oxford are near constant: I see stickers with trans-positive messages scratched out, or on occasion a sticker that informs me that my biology apparently does dictate my gender. I see a tutor delivering lectures who believes my gender is simply something I was forced into so I wouldn’t be a lesbian (which, having a boyfriend, gave me a good laugh through the pervasive feeling of disappointment that verged on disgust).

Reminders of transphobia in Oxford are near constant: I see stickers with trans-positive messages scratched out, or on occasion a sticker that informs me that my biology apparently does dictate my gender.

I can try all I like to tell myself that these things don’t matter. That I never have to put myself in a situation where I have to talk to someone whose views I see as transphobic. I don’t have to go to the lectures, no matter how relevant they may be to my interests or my modules, if I don’t feel comfortable with how an historian who studies gender views my own gender. I don’t have to put myself through that kind of discomfort.

It’s times like this that I wonder what affect the University thinks this kind of event has on transgender students. I wonder if they consider how alone it makes a transgender student feel, knowing whose existence is given priority. Free speech is important – free speech is what means I can write an article about these problems with only a little fear that people will think worse of me – but free speech doesn’t oblige the University to provide a platform in a city full of public places and venues available for hire.

I don’t like being pessimistic, and I try my best not to think the worst of people, but it can be difficult when it comes to something that’s both incredibly personal and something that gets debated daily online and in the press. As a transmasculine person I’m not even at the forefront of the constant battles over who is allowed where or what should be done about the supposed ‘problem’ that transgender people pose. I’m thankful for that, but it doesn’t stop me being hurt when I see the opinions some people hold when it comes to trans people.

I don’t like that this whole situation hurts me. I don’t like that it will hurt me again, when someone else with these kinds of views gets a speaking opportunity in Oxford (in two weeks, the Oxford Union will host a speaker who supports Trump’s ban of transgender people serving in the US military). I don’t like that the same argument will surface every single time that their right to a prestigious platform is greater than my right to safety and security.

I don’t like it, I won’t magically like it if I hear the same argument again, and I don’t think this will get any easier in the rest of my time at Oxford. Perhaps it’s ‘silly’ to feel that way, or ‘overly emotional’. Maybe it is a bit emotional of me, to attach my wellbeing to speeches of people who don’t even know me personally.

The words of the speakers at WPUK are not directed towards me. But that doesn’t make them any less harmful towards myself, towards other trans people and especially towards trans women. And the University may not intend to hurt me, or anyone else, but they did anyway.