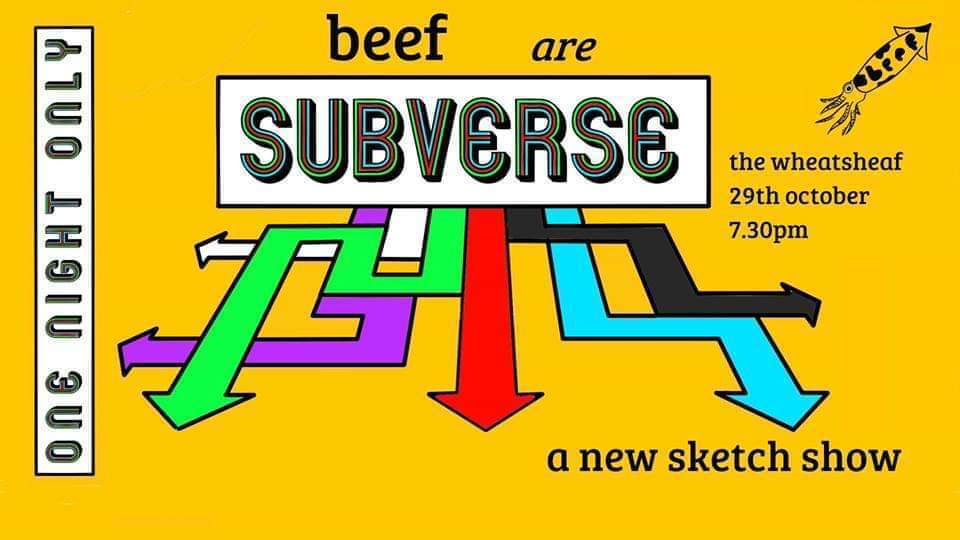 I won’t lie, when I first saw the running time for Sübverse I was skeptical. A sketch that can maintain audience interest for over 90 minutes is an impressive feat even for the most seasoned of comedians. And yet, it quickly became apparent that my fears were misplaced. Sübverse was consistently entertaining and hilarious, and made admirable attempts to reflect upon the characters it brought to life. There may have been moments where individual sketches lagged, but it’s safe to say that by the end the end of the show Tommy Hurst and Matt Kenyon had won me over with their surreal comic worlds.

The strengths of both comics are apparent from the beginning. We are introduced to two ex-CBBC presenters who have been fired under (initially) unrevealed circumstances – these will be our hosts for the evening, carrying us through a medley of comic characters all brought to life by Hurst and Kenyon. The talent of both performers who manage to seamlessly shift from, say, two cranky old men lamenting the “old days,” to insecure private-school boys embroiled in an absurd rap battle, goes without saying. But it is also a banquet for the audience, who are served a refreshing mix of comedic styles. On the one hand, these characters comprise of stock tropes from sketch-based comedy: the show is saturated with mis-hearings, innuendo and physical comedy. But while such features are delightfully old-school, Sübverse felt fresh. Hurst and Kenyon pool from a range of comedic tactics and the show is suffused with elements of improv, inventive use of shadows behind a thin screen, interaction with the audience, and, ultimately, a heartfelt, overarching narrative surrounding the two ex CBBC presenters. Hurst and Kenyon are two comics who are comfortable and entirely immersed within their medium and have managed to create something new through melding together an assortment of styles.

Neither does Sübverse back away from making jokes that might fly over the heads of certain audience members. Niche references to 00s CBBC shows and a running gag about actor Dani Harmer (best known for Tracy Beaker) were not only hilariously snarky but also illustrated an important faith both performers have in their audience. In such moments Hurst and Kenyon truly earn their laughs. But by far the strongest comedic sections were those that involved the harassment of an unsuspecting audience. At times it felt like the joke was on the viewer rather than performer, and I mean this in the very best way. A particular highlight was a sketch that placed a number of audience members onstage for a “perfect” birthday party. After everyone was assembled Hurst and Kenyon abruptly left the set, leaving behind a new cast of clueless, dumb-struck audience members who were met with the rapturous laughter by those that remained seated.

But Hurst and Kenyon are also clearly unafraid of being risqué. Many of their jokes revolve around sexual insecurities, with a particular focus on straight male anxieties towards homoeroticism. At times this becomes a tool to criticise the absurdity of such insecurities. When the two old men describe the good old days of comedy as “tastefully homophobic” the joke is clearly on them – Hurst and Kenyon were at their best when they used this humour critically, to reflect back on their insecure characters. But at times jokes in this vein were less effective. This was not because they were always offensive but because they seemed to buy into the lazy trope that same-sex attraction is in itself funny. I urge Hurst and Kenyon to reconsider passages where they rely on descriptions of gay sex purely for laughs or allude to the word “queers” through rhyme. While respecting that comedy should challenge sensitivities, such moments feel a bit more school playground than cutting edge comedy, in a show which in many other respects lives up to its subversive namesake.

And I should doubly stress that these instances do not tarnish my overall opinion of a piece which is otherwise thoughtful and emotionally resonant. The friendship between the two ex-CBBC presenters eventually becomes the heartfelt centre of the show, and I found myself actively engaged in the ups and downs, and ultimate resolution, of their relationship. Hurst and Kenyon approach their lively characters with a healthy degree of humanity, and are attuned to the toxic elements of conventional masculine behaviour and its comedic potential (even if this is not always done in the most effective way). The ending of the show offers a strong message of reconciliation, using comedy to bring individuals together, rather than apart, through laughter.

All in all, Sübverse is a triumphant and ambitious sketch show, and I suspect this won’t be the last we’ll see of Tommy Hurst and Matt Kenyon who are clearly two comics to watch.