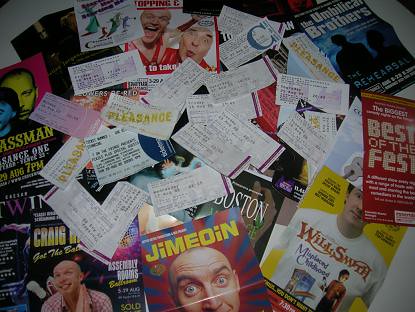 Life as an Edinburgh Fringe Reviewer

I went into the Edinburgh Fringe Review without any real expectations. I signed up to do it on a last-minute whim, applied for a travel grant from college, and the next thing I knew I was on the train to Scotland.

The concept was appealing: a week sharing a flat in central Edinburgh with a group of students from other universities, with food already provided and free press access to two shows a day. All we had to do in return was write reviews – something which, as an English student, I thought I could pretty much do in my sleep.

It was somewhat sobering to discover that it wasn’t quite that easy. I walked into the process with the Oxford attitude, cockily assuming that I could just turn up, churn something out and everything would be fine. Little did I know that edfringereview.com had a style all of its own.

Where our flatmates soared ahead, my friend from Oxford and I floundered in the dust. The editors explained that our articles weren’t ‘colloquial’ enough and didn’t suit the brand of the company. I must admit that a small part of me died when I swapped out ‘it highlights the strangeness inherent in the Bacchic ritual’ for ‘it really packs a punch’. Everything became ‘hilarious,’ ‘laughter,’ ‘tears,’ ‘an almost incomprehensible freneticism’.

Working alongside peers from other universities also made me realise how toxic the Oxford way of life can be. While everyone else would ensure that they’d got all their reviewing done during the day, going to bed early and getting up at a reasonable hour, my friend and I would overload our social schedules to the point that we were forced to bash out all our reviews on the sofa at midnight.

We alone punished ourselves with gruelling five-hour nights of sleep because we’d stayed up until 3am laughing at Love Island memes; we alone submitted our final reviews on a bench in London Liverpool Street Station, hours after the final deadline.

I’d always thought we were reasonably well-behaved, but I’m pretty sure our flatmates viewed us as wayward alcoholic reprobates. So that was…food for thought, to say the least, but there were plenty of other things I learned from the experience too.

For a start, as reviewers we were often required to do as much acting as the performers. We’d stuff our red EFR hoodies in our bags before we went in so as not to freak the actors out. In one particularly memorable scenario, another reviewer and I were sent to the back room of a pub to watch a one-man stand-up gig and found that we were the only audience members. We maintained eye contact with the middle-aged male comedian throughout all his gags about prostate examinations and blowjobs, forced to laugh maniacally at every single joke whether it was funny or not. By the end, I wasn’t even sure if I had a sense of humour.

Our acting became even more active as we smiled and chatted to people whose shows we were about to slate. It sounds horrible, but what else could we do? Not every play deserves a five-star review – in fact, the more exaggeratedly generous you are, the more credibility you lose. At the start of the week, I was tearing my hair out about giving someone a three-star review; by the end, I was handing out one star without so much as batting an eyelid. The Fringe is a wonderful festival, but it can also be soul-crushing – there’s so much talent packed into one place that it’s very difficult to give everyone a fair hearing. And there are two sides to every coin: performers have a duty to sell their shows, but reviewers have a duty to tell paying visitors whether they’re worth seeing.

By the end, I wasn’t even sure if I had a sense of humour…

Undeniably, the quality of the shows we were sent to review was incredibly variable. I struggled not to fall asleep in a dimly-lit 11pm performance of a Greek tragedy, watched a grown man snog himself in a mirror, sat in the back row of a children’s show trying hard not to look like a creep, and laughed hysterically through an entire performance of an adult pantomime (it wasn’t funny – it was a coping mechanism).

Oddly enough, though, I wouldn’t change anything about the experience. There was something exciting about the lottery-like randomness of the shows we were allotted: each day was genuinely different and surprising. Although we had deadlines which gave us a sense of purpose and achievement, there wasn’t any pressure attached to them, and this proved a welcome contrast to the stress of Oxford term-time.

When I returned from Edinburgh, I felt sleep-deprived but strangely rejuvenated, and already excited about next year.