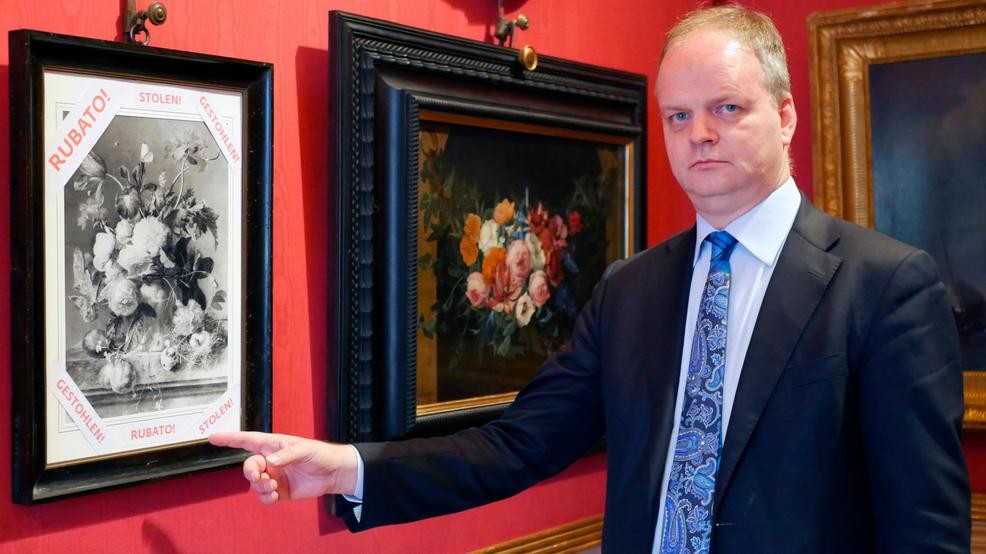 Image description: Eike Schmidt posing beside a print of ‘Vase of Flowers’

An interesting ‘case study’ is provided by a painting which recently garnered significant worldwide attention: in mid-2019, 75 years after having been stolen by the Nazis during the Second World War, Italian and German officials co-operatively arranged for the return of Dutch painter Jan van Huysum’s (1682-1749) ‘Vase of Flowers’.

Having been acquired by Grande Duke Leopoldo II, the $2.3 million painting first went on display in Florence in 1824, before ending up in the collection of the renowned Uffizi Gallery. During the German occupation of Italy, a number of precious artworks were stowed away for safety in a nearby village; however, upon the Germans’ retreat, van Huysum’s painting was stolen by Nazi soldiers in 1943.

Earlier this year, Eike Schmidt – the Uffizi’s German director – shamed his homeland for protecting the unrightful owners of the painting, publicly demanding its return to Italy. On New Year’s Day 2019, the Uffizi released a series of dramatic photographs depicting Schmidt stood beside a black-and-white reproduction of the painting in a drab black frame surrounded by the word ‘Stolen’, translated into multiple European languages.

Indeed, there is a general disregard for the consideration of the ‘real-world’ treatment and condition of artworks as physical forms.

The discussion surrounding van Huysum’s stolen painting makes one conscious of the fact that, when most people consider works of art – particularly paintings – they recall them as images, rather than physical objects. Indeed, there is a general disregard for the consideration of the ‘real-world’ treatment and condition of artworks as physical forms. While this may seem painfully obvious, actually considering an artwork’s physical being generates interest as to its history: some paintings are still sat on the same canvas, in the same frame as they were centuries ago.

Throughout history, a number of iconic objects have actually endured peculiar treatment; for example, the world’s most famous painting – the ‘Mona Lisa’ – was stolen in 1911. Taken by Vincenzo Peruggia, the painting was kept hidden in a trunk in his apartment, before he travelled back to Italy where he was caught and ‘Mona Lisa’ was returned to the Louvre in 1913. Despite the worldwide recognisability of the painting, how many tourists can imagine the canvas crammed under a thief’s bed in pre-war France?

Should the physical history of an artwork influence its meaning or place in international culture?

When one studies an artistic artefact, whether closely or superficially, should there also be an expectation that they should consider its physical existence and past as well as its aesthetic qualities? Should the physical history of an artwork influence its meaning or place in international culture?

I argue that this focus should be encouraged; when contextualising a work of art with the consideration of its being a physical object, one which has lived through different owners, historical events and thefts (as is the case with the van Huysum), it becomes so much more intrinsically rich. And this seems the case for the Van Huysum painting; although already a painting by a celebrated Dutch artist, ‘Vase of Flowers’ is more than an image – it is a canvas embroiled in an international art controversy dating back to the Nazis.

The intrinsic value of paintings as physical objects, therefore, should not be overlooked; arguably, the physical objectification of artistic images is almost as powerful as the image itself. There is a profundity to the idea that, when one looks at a centuries-old painting, they are sharing the same sight as those centuries before them. When you next chance to see the ‘Mona Lisa’ staring blankly back at you from behind the varnish, recall that she was once staring up at the bottom of Peruggia’s bed.